Trump weighs in on reparations for slavery 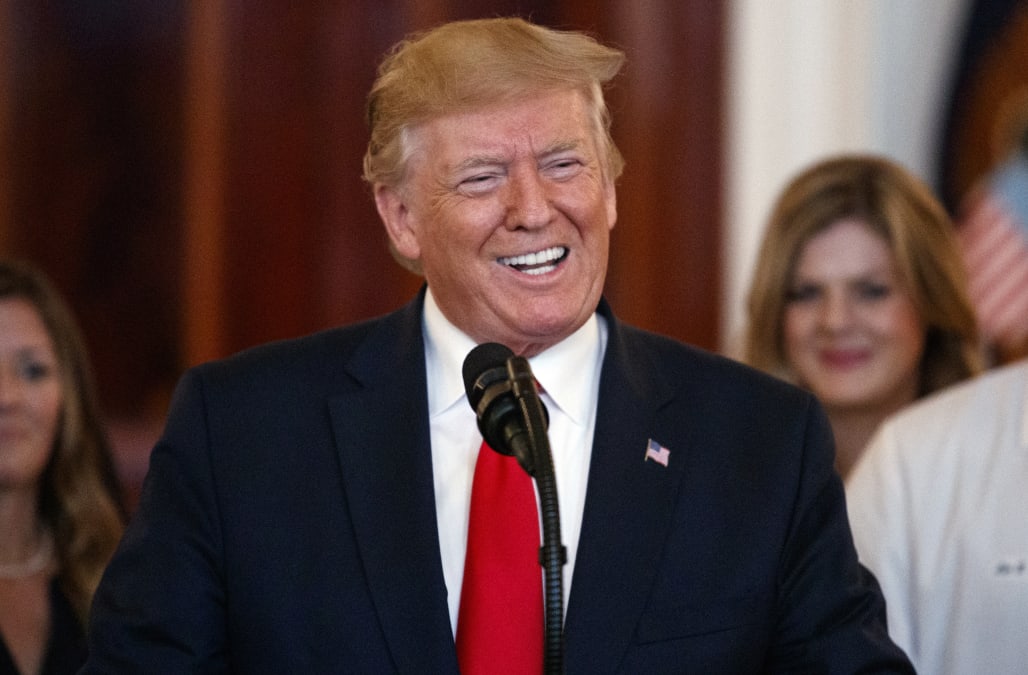 President Trump on Monday commented that he does not foresee reparations being made to the descendants of slaves.

“I think it’s a very unusual thing. You have a lot of — it’s been a very interesting debate. I don’t see it happening, no,” he told The Hill.

Trump’s comments follow a hearing on the matter held by the House Judiciary Subcommittee on the Constitution, Civil Rights and Civil Liberties.

Under consideration at this time is establishing and funding a commission-led study on the effects that offering reparations of some kind would have.

Roy Moore's claim American was 'great' during slavery sparks backlash
Republican candidate for U.S. Senate Judge Roy Moore speaks during a campaign event in Fairhope, Alabama, U.S., December 5, 2017. REUTERS/Jonathan Bachman
For suggesting life was better during segregation and Jim Crow, Trent Lott was run out of the Senate. Now Roy Moore… https://t.co/CHAYc4HEQN
If you are Black in Alabama, what more do you need? Roy @MooreSenate actually said times were better in America for… https://t.co/8VLgtBOzKD
Still can't get over the fact that Roy Moore was asked when was the last time America was great and he literally said during slavery.
Unbelievable. @ShaunKing is NOT kidding you. Moore: “I think it was great at the time when families were united --… https://t.co/bUP1mSF8sv
👇🏽 Black Constituent: When was America great? Roy Moore: Before abolition of slavery. 👆🏽 #DougJonesForSenate https://t.co/AHYzu6yjWB
Just to be absolutely clear, The Republican Party has formally endorsed a candidate for Senate who believes the co… https://t.co/qj2zJsg2uw
SLAVERY. Roy Moore said the last time America was great was during slavery. With a straight face. Slavery.… https://t.co/sXF57uqLNK
Like everyone should be super shocked that the same “man” who stalked and sexually assaulted girls, also thinks Jew… https://t.co/3WUtSClQvE
@realDonaldTrump Do you love pedophilia? Do you miss slavery? Do you think Putin is right? Do you believe women… https://t.co/lzrViQbA7D
Good Morning! In case you were left with any doubt, please be advised The Make America Great Again Agenda loves sla… https://t.co/MGB3EJjvZW
Even if the pedophilia charges were false, I would still question the morality of someone who believes making Ameri… https://t.co/EyDA56ODeS
Reminder: the GOP & the president are campaigning for a Senate candidate who is not only is accused of child molest… https://t.co/Mt486qPSXF
Up Next

A ‘Think’ piece published by NBC News notes many agree that a solution would not simply address slavery itself, but seek to mitigate its enduring effects including “100 years of Jim Crow legal segregation…persistent racism in the post-Civil Rights era continuing to the present…mass incarceration, police executions of unarmed blacks (de facto lynchings), discrimination in employment, and, significantly, the enormous racial wealth divide between black and white Americans.”

According to the New York Times, ways to do so being discussed include “zero-interest loans for prospective black homeowners, free college tuition, community development plans to spur the growth of black-owned businesses in black neighborhoods.”