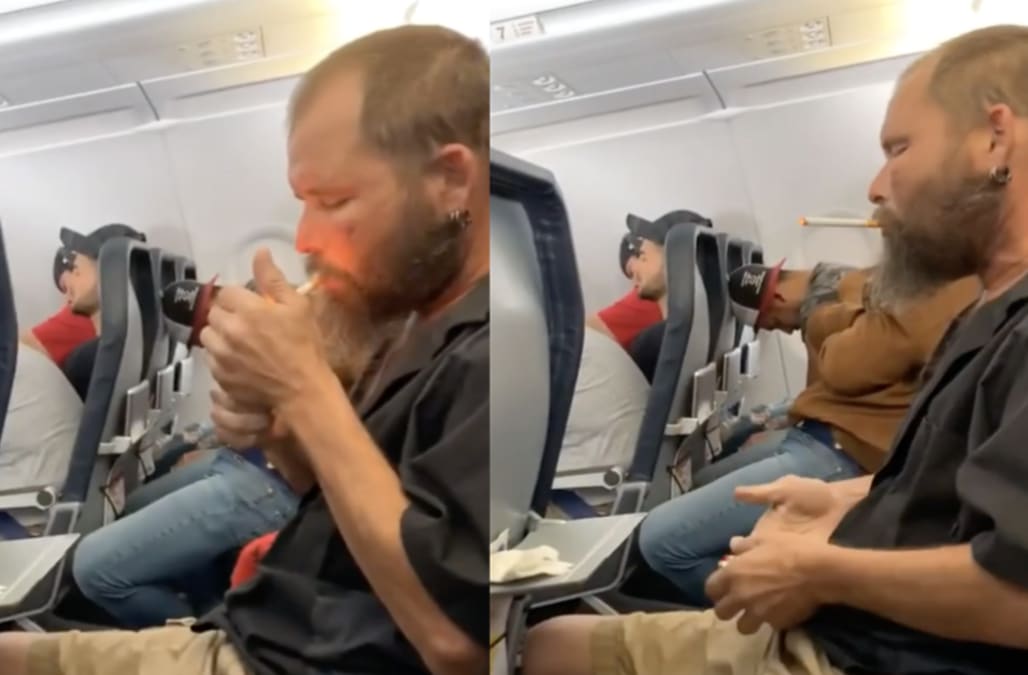 Wild footage from a Spirit Airlines flight to Minneapolis, Minnesota, shows a passenger who began smoking mid-flight, breaking one of the cardinal rules of air travel.

The clip, recorded by a fellow passenger on May 21, captured a visibly intoxicated man in a dark tee shirt and khaki shorts light up and take a puff before lowering the smoking cigarette to his lap and seemingly falling asleep.

A man sitting across the aisle from the rule-breaking passenger can be seen flagging down a flight attendant, who rushes over and hits the man's chest to wake him up and inform him what he’s doing is illegal.

The smoker appears startled, saying "oh my God," as the flight attendant asks to see his boarding pass.

The unnamed passenger who recorded the shocking footage said she noticed the man was intoxicated from the moment they both boarded the plane at 8:30 a.m.

"This man was in my seat, and I thought he might be inebriated," she explained. "Once everyone boarded the plane I got in my assigned seat and realized his seat was next to mine. I breathed in deeply, but told myself that I wouldn’t be that person to treat him differently."

After the plane doors closed, the woman said the man noticed the aisle seat next to him was empty and moved over, which provided her with a moment of relief — until after takeoff.

"Throughout the flight, I could hear him making loud outbursts. Roughly 40 minutes before we landed, he laid across the two seats with his butt towards me," she recalled. "He continued his loud outbursts and began aggressively flipping the tray open and closed, then he sat up. I saw him take the cigarettes and lighter out of his pocket. I pulled out my phone and started to record as he lit the cigarette."

According to the woman, airport police removed the man from the plane as soon as it landed. It is unknown if any charges were filed against him.