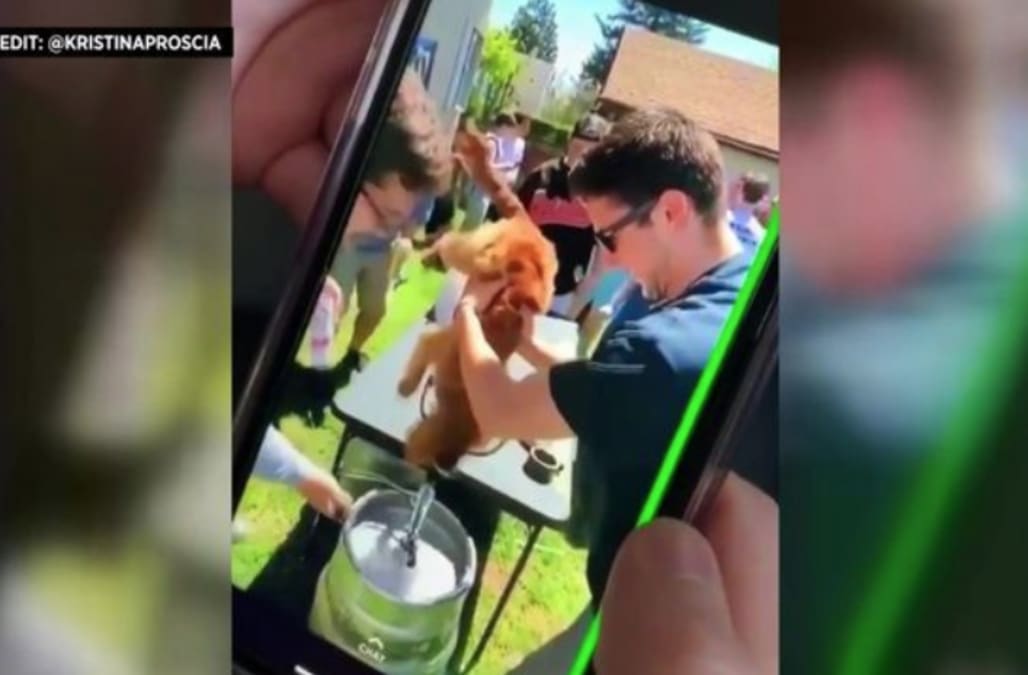 A fraternity at Hofstra University has been placed on suspension after a video surfaced showing members of the school’s Alpha Epsilon Pi chapter forcing a dog to drink beer.

Two members of the fraternity at the Hempstead, New York, school were captured in a short Snapchat video, where they held the dog upside down while pouring beer into the animal’s mouth.

As the video made the rounds on social media, another student, Kristina Proscia, tweeted it out — garnering the attention of the university and Alpha Epsilon Pi headquarters, as well as PETA.

“So apparently it’s okay to force dogs to drink beer even though it can kill them?” Proscia wrote.

so apparently it’s okay to force dogs to drink beer even though it can kill them???? @HofstraU@AEPi pls do better @petapic.twitter.com/u8Wx78MUfL

In the few days since the video was posted, the school has responded and made it clear that they do not support the fraternity’s behavior. A spokeswoman for Hofstra tells Yahoo Lifestyle that there is currently an investigation looking into the off-campus incident.

“The behavior seen on the video is unacceptable and in violation of the University’s Code of Community Standards. The University has been in communication with Alpha Epsilon Pi International headquarters, as well as with chapter members regarding this off-campus incident,” the provided statement reads. “In accordance with University policy, the chapter has been placed on interim suspension pending an investigation. In addition, any individual students identified in the video will also be subject to the University’s Code of Community Standards.”

While the school’s investigation may yield disciplinary action aimed at the members specifically involved, Alpha Epsilon Pi International has also addressed the video and launched their own investigation.

“Alpha Epsilon Pi International has placed our chapter at Hofstra University on ‘cease and desist’ due to suspected violations of our health and safety policies. During this investigatory period, there can be no chapter activities,” a statement provided to Yahoo Lifestyle reads. “We hope that we are able to use this as a teaching moment to help build better young men who are committed to our policies and our mission of developing the future leaders of the world’s Jewish communities.”

Proscia has since added another message to her tweet to clarify her intent in posting the video.

“I did not share this to retaliate or to get the people involved in trouble,” she wrote. “I simply shared this to protect the dog and to show I do not support this and this is not an accurate representation of Greek Life.”