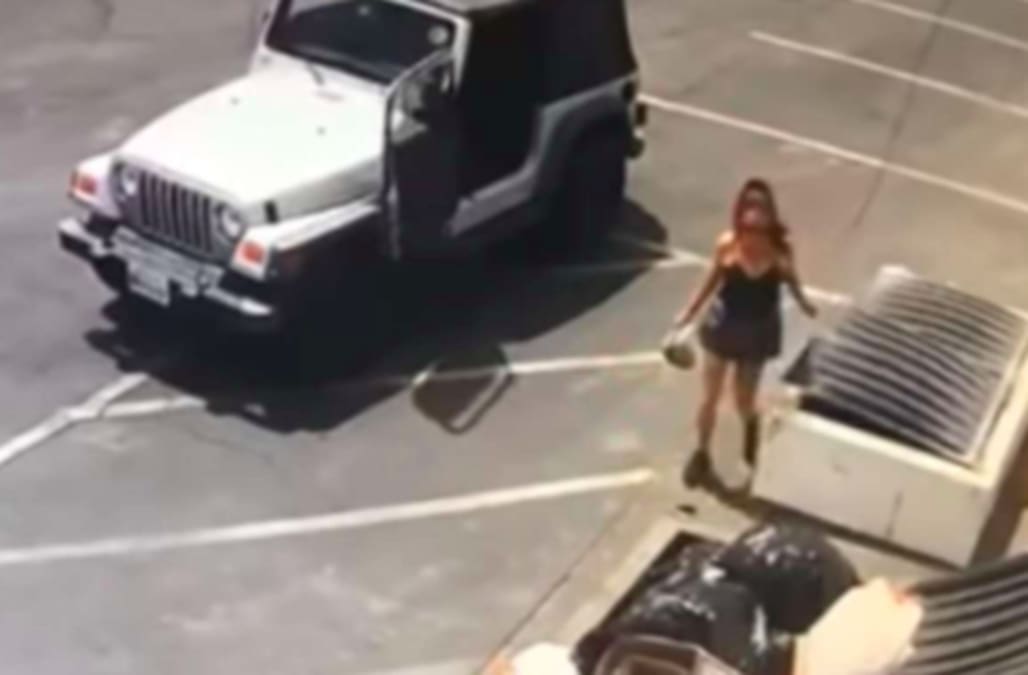 Authorities in California are asking for the public's help in identifying a woman caught on surveillance video tossing a bag of 3-day-old puppies into a dumpster in Coachella, Calif.

Footage released by the Riverside County Department of Animal Services (RCDAS) shows the unidentified woman pull up in a white Jeep near some large trash receptacles behind Napa Auto Parts around 1 p.m. on Thursday afternoon.

The suspect, who has long dark hair and was wearing a dark tank top and skirt, can be seen exiting her vehicle and tossing a white plastic bag into one of the bins.

A concerned passerby who witnessed the incident proceeded to rummage through the dumpster and fish out the bag. The rescuer, identified only as John, brought the puppies into the auto parts store and alerted an employee, who called the RCDAS.

Officer Jose Cisneros retrieved the seven puppies, believed to be terrier mixes, around 2 p.m. All of the newborns survived the cruel incident.

The RCDAS' veterinary team members cared for the puppies before enlisting a local rescue group to take over bottle-feeding duties, the organization said.

Officials believe the pups would likely not have survived much longer in the mid-90-degree weather if the passerby had not intervened.

"The Good Samaritan played a major role in saving [the] puppies’ lives," Commander Chris Mayer said. "His actions were humane and heroic."

Mayer condemned the woman's behavior as "despicable," adding that he and his colleagues were communicating with Riverside County Sheriff’s investigators and the district attorney’s office to build a "strong" animal cruelty case.

"There is no excuse for dumping puppies," Mayer said. "Especially in today’s age when we or other shelters would be willing to get these animals to foster parents or rescue partners. This was a shameful act."