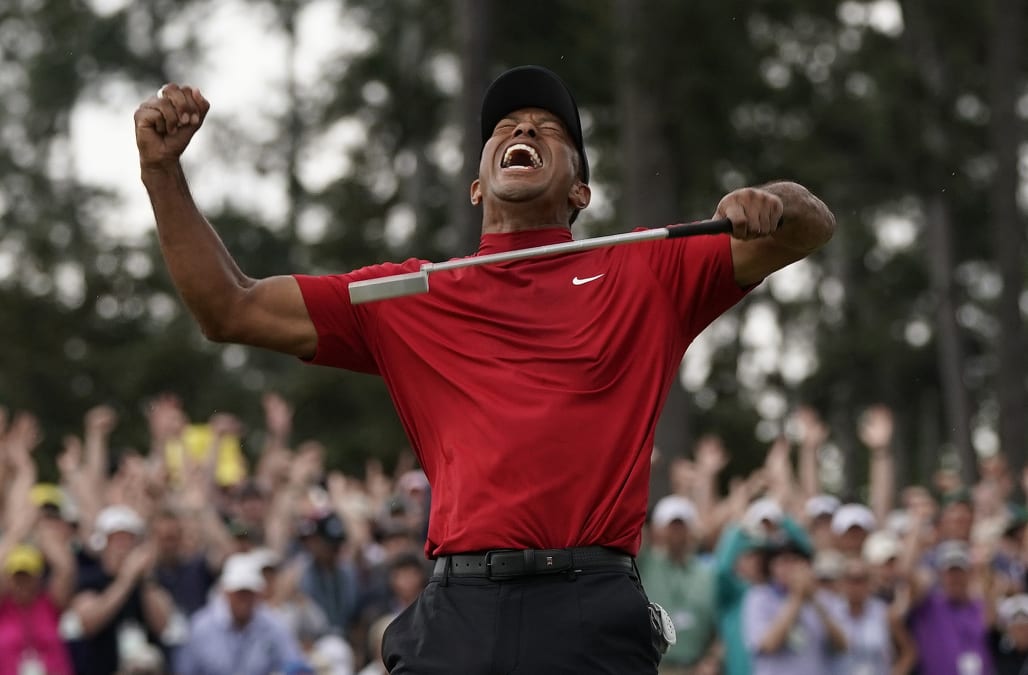 It was only a matter of time before noted golf obsessive President Donald Trump publicly congratulated Tiger Woods for his comeback Masters win on Sunday. He got around to it on Monday afternoon, but it was a lot more than just a run-of-the-mill “great job, champ!” tweet.

Along with his congrats, Trump tweeted that he will be giving Woods the Presidential Medal of Freedom for “his incredible Success & Comeback in Sports (Golf) and, more importantly, LIFE.”

Spoke to @TigerWoods to congratulate him on the great victory he had in yesterday’s @TheMasters, & to inform him that because of his incredible Success & Comeback in Sports (Golf) and, more importantly, LIFE, I will be presenting him with the PRESIDENTIAL MEDAL OF FREEDOM!

Only three golfers have ever been awarded the Presidential Medal of Freedom: Arnold Palmer, Jack Nicklaus and Charles Sifford. George W. Bush gave it to Palmer in 2004 and Nicklaus in 2005. Barack Obama gave it to Sifford in 2014. Palmer received his award in his mid 70s, and Nicklaus in his mid 60s; both are widely considered to be two of the greatest golfers of all time. Sifford was the first African American to play on the PGA Tour, and has been called the Jackie Robinson of professional golf. He received his medal the year before he died at age 92.

Celebs react to Tiger Woods winning the 2019 Masters
Congratulations to @TigerWoods., a truly Great Champion!
Running the numbers on how long it’ll take me to get to 15... https://t.co/PcNSF2oCzB
Congrats Tiger! What a performance..
Tears.. so proud of this man
Whoa! Way to feel the flow, @TigerWoods! Huge congrats! Love, Happy Gilmore
What a comeback!!! Congrats @GCTigerTracker on winning @TheMasters #green https://t.co/m9NJ8O5y1G
I am literally in tears watching @TigerWoods this is Greatness like no other. Knowing all you have been through phy… https://t.co/LCIYSbINxs
Congratulations, Tiger! To come back and win the Masters after all the highs and lows is a testament to excellence, grit, and determination.
I SALUTE YOU @TigerWoods‼️‼️‼️ #Inspired
The tradition continues... and OH MY GOD! What an unbelievable day. We watched Tiger Woods win the Masters. Congratulations @tigerwoods that was incredible to watch. History. #themasters #tigerwoods
The greatest come back in the history of sports! Congrats @TigerWoods!!!! 🐯✨ https://t.co/mbai9RVD7G
TIGER 🙌🏾🙌🏾🙌🏾 #masters2019
A big BIG congratulations to @TigerWoods for winning the Masters!! The roar of the Tiger is back!
Greatest comeback story in sports! Congrats @TigerWoods Let me hold one of those 5 jackets one time!
A big “well done” from me to @TigerWoods! I am so happy for him and for the game of golf. This is just fantastic!!! 👏🏼 @TheMasters
You KNOW this one is framed and on the office wall! Congratulations, @TigerWoods on one of the greatest comebacks e… https://t.co/ysUS20VN53
#themasters Tradition! CONGRATULATIONS @TigerWoods BEST OF ALL TIME! 🏌️ https://t.co/NciqCce0tA
Big time ✋🏾 hi-five to @TigerWoods so impressed on your comeback & win. I don’t play golf but Tiger transcends all… https://t.co/XUMgCzKFFY
Golf courses everywhere in the world will be packed after tigers win today. Hate him or love him he’s the reason mo… https://t.co/CRtOMwlks3
What a beautiful day it’s been watching #TheMasters and #TigerWoods win. As a father I couldn’t help but cry when h… https://t.co/54H3AZqmTG
Speechless ❤️ @TigerWoods
I can’t even handle how happy I am for @TigerWoods . I cried for him. I feel so happy he has this win, and he made… https://t.co/zwq5DnIOUX
Up Next

Woods is 43, and despite his physical issues over the past several years, doesn’t appear close to retiring. His comeback win on Sunday was certainly monumental, but he hasn’t yet beaten Jack Nicklaus’ record of 18 major tournament wins (though his fifth Masters win brought him within three of tying that mark). Woods has done a lot to come back from a number of low points in his life, but some of those — like cheating on his now ex-wife and being arrested for driving under the influence — were self-inflicted.

Trump and Woods have known each other for several years. They’ve gone golfing together and had dinner together numerous times. Woods has continually avoided commenting on Trump’s policies and beliefs, something which Trump has applauded him for in the past.

The Fake News Media worked hard to get Tiger Woods to say something that he didn’t want to say. Tiger wouldn’t play the game - he is very smart. More importantly, he is playing great golf again!