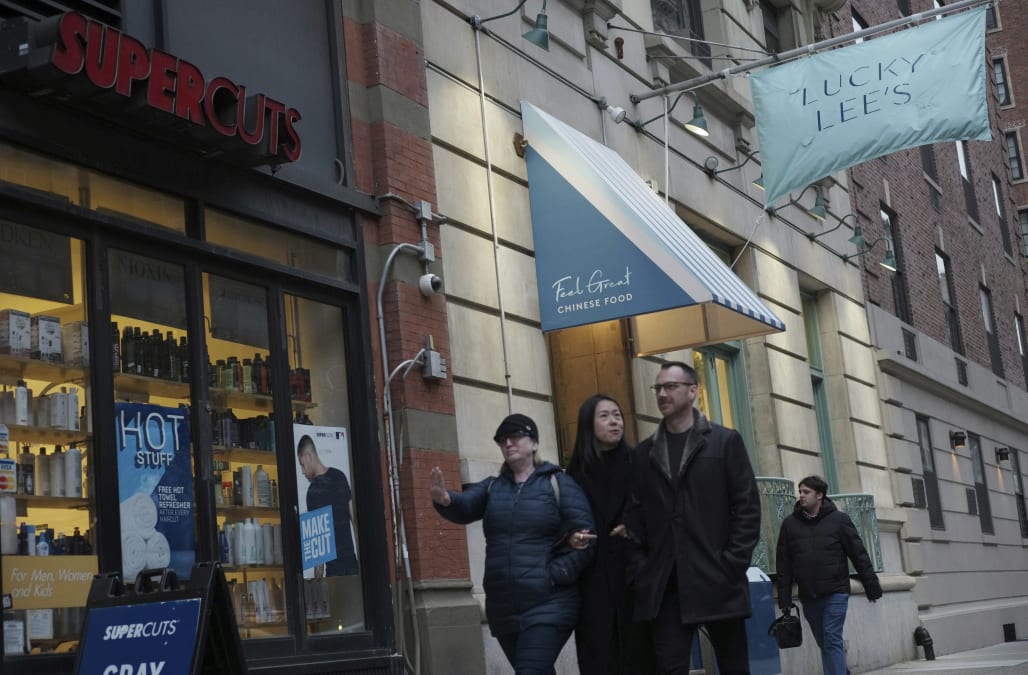 A newly opened Chinese restaurant in New York has been criticized for a racially insensitive campaign that markets "clean" food.

Lucky Lee's, a restaurant by nutritionist Arielle Haspel, faced almost immediate backlash for allegedly belittling American-Chinese cuisine by sharing posts on Instagram earlier this week that were intended to promote her MSG- and gluten-free approach, according to PIX 11.

In one of the now-deleted posts, the restaurant quoted someone saying, "I wish there was a place to get healthy Chinese food." Another post read, "We heard you're obsessed with lo mein but rarely eat it. You said it makes you feel bloated and icky the next day? Well, wait until you slurp up our HIGH lo mein. Not too oily. Or salty."

The inference, critics say, is that American-Chinese food is "dirty" — a stereotype that the Chinese community has long fought against in the U.S.

Lucky Lee's also raised eyebrows after Haspel said she had planned to use a decal that read "Wok in, Take Out." Many on social media, particularly those of Asian descent, bashed the restaurant and its owner — who, along with her husband Lee, are both Jewish — for cultural appropriation.

In response, the restaurant attempted to defend itself in a long Instagram post by claiming that its owners had a strong connection with Chinese cuisine despite their non-Asian backgrounds.

"Similar to many other Jewish New Yorkers' diets, bagels, pastrami sandwiches and yes, American Chinese food, were big and very happy parts of their childhoods," the post reads. "New York is the ultimate melting pot and Lucky Lee's is another example of two cultures coming together. To us, this is a good thing."

The other day we received some negative comments on an Instagram post. Some of your reactions made it clear to us that there are cultural sensitivities related to our Lucky Lee’s concept. We promise you to always listen and reflect accordingly. A number of comments have stated that by saying our Chinese food is made with 'clean' cooking techniques and it makes you feel great that we are commenting negatively on all Chinese food. When we talk about our food, we are not talking about other restaurants, we are only talking about Lucky Lee's. Chinese cuisine is incredibly diverse and comes in many different flavors (usually delicious in our opinion) and health benefits. Every restaurant has the right to tout the positives of its food. We plan to continue communicating that our food is made with high quality ingredients and techniques that are intended to make you feel great. Chef/owner, Arielle's husband's name is Lee and his life-long love of Chinese food was inspiration for the restaurant. The name Lucky Lee's reflects the story of how the recipes were conceived. We also received negative comments related to being owners of a Chinese restaurant but not being Chinese. Owners Arielle and Lee are both Jewish-American New Yorkers, born and raised. Similar to many other Jewish New Yorkers' diets, bagels, pastrami sandwiches and yes, American Chinese food, were big and very happy parts of their childhoods. New York is the ultimate melting pot and Lucky Lee's is another example of two cultures coming together. To us, this is a good thing. We love American Chinese food and at Lucky Lee's it is our intention to celebrate it everyday and serve great food. #luckyleesnyc

Many Instagram users did not buy the restaurant's explanation, calling for the business to be shut down.

"This is how you know it's gentrification. Literally the entire aesthetic of the place screams cupcake shop," one commenter wrote. "The only indication that it's supposed to be [Chinese] is "clean [Chinese restaurant]" on the menu and the word LUCKY everywhere possible. It's textbook appropriation."

In a New York Times interview, Haspel said she had good intentions and was surprised that critics were grouping her with other controversial white restaurateurs — such as British chef Gordon Ramsay and "Bizarre Foods" host Andrew Zimmern — who have tried to market their own twist on Asian food as better than those made by Asians themselves.

"We are so sorry," Haspel told the Times."We were never trying to do something against the Chinese community. We thought we were complementing incredibly important cuisine, in a way that would cater to people that had certain dietary requirements."

Several Chinese chefs, who learned of Haspel's restaurant, expressed their displeasure with the newspaper.

"She mentions that every time she goes to eat Chinese, she's bloated," Chris Cheung, owner of East Wind Snack Shop, said. "Well, I don't know where she is going to eat Chinese food, but that doesn't happen to me or anyone else who I know when they eat it."

RELATED: Learn how to make Chinese food at home:

5 PHOTOS
How to Make Chinese Food at Home
See Gallery

How to Make Chinese Food at Home

Check out some unbelievable Buddakan dishes you can make at home!

"Soup dumplings are pretty traditional for the New Year," says Ray. "Opulent ingredients are a sign of wealth and prosperity. The shapes of the dumplings are meant to look like gold nuggets."

Get the Recipe: Crab and Pork Soup Dumplings

Replete with red snapper, scallop, shrimp, Manila clams and rock lobster tail, this seafood-packed plate represents abundance. "The Chinese word for fish is a homonym for the word for surplus; it symbolizes increased prosperity," says Ray. "The opening of their shells represents the opening of new horizons."

Get the Recipe: Seafood Hot Pot with Green Curry

"Longevity noodles symbolize a long life; the longer the better." Try this savory, wok-tossed recipe at home for a long life.

Get the Recipe: Longevity Noodles with Sea Urchin Butter

In her blog, Haspel, a former host of Glamour magazine's short-lived "Treat Yourself" series, has said that her definition of "clean eating" involves staying away from "chemicals, additives and sweeteners."

But, in fact, many Chinese restaurants in New York already use gluten-free, non-GMO and organic ingredients. Buddha Bodai, for instance, has served kosher, vegetarian meals made from those very items in Manhattan's Chinatown since 2004.

Marketing controversy aside, Lucky Lee's may have to deal with a bigger problem. Gothamist recently published a scathing review of the restaurant's food.

"The assortment of dishes we tried were not promising," wrote arts and culture editor Ben Yakas. "The General Tso's Chicken was tough and overcooked, to the point of being cardboard-like in consistency, though the string beans on the side were fine."