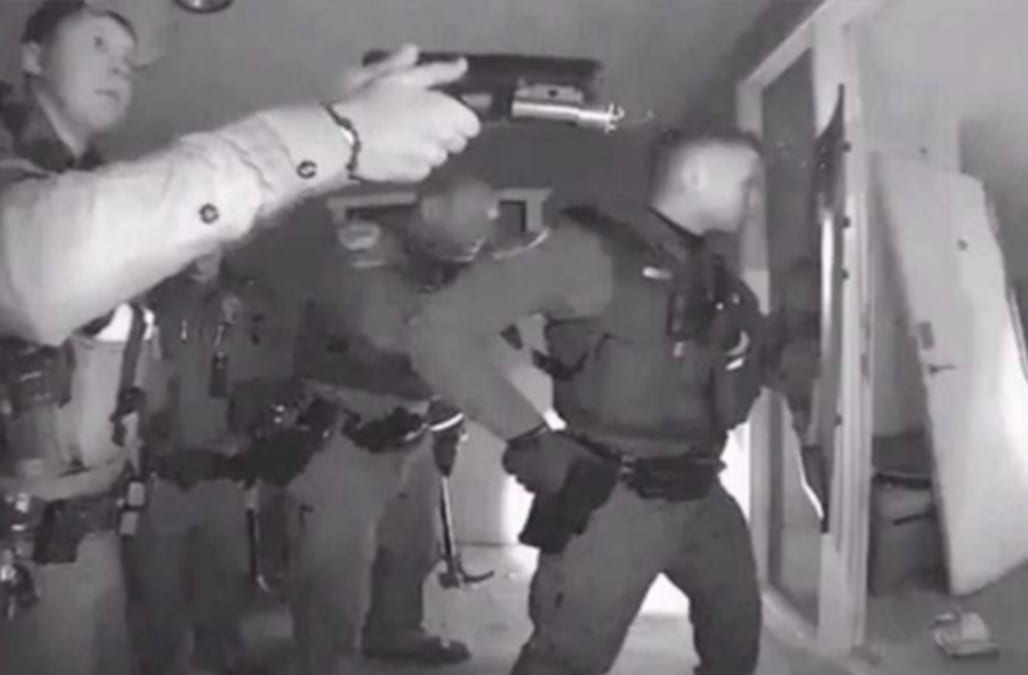 Police with guns drawn broke down the door of an Arizona home and ordered three children into the custody of the Department of Child Safety because the parents had refused to take their son who had a high fever to the hospital.

Sarah Beck brought her 2-year-old son to Southwest College of Naturopathic Medicine on Feb. 25 and was told he had a temperature of more than 105, according to reports by the Chandler Police Department.

The doctor believed the child could be suffering from a "life-threatening" illness that could not be tested for at the clinic, so she told Beck to take the toddler to the hospital, a police report said. The mother was reluctant because the boy wasn't vaccinated, and she feared "possible repercussions," the report said.

When the doctor found out later that day the child had never made it to the hospital, she called the DCS, which contacted the Chandler Police Department because "there was a present danger to (the child’s) health/wellbeing and that he required immediate medical attention," police said.

When police arrived, Beck and her husband, Brooks Bryce, wouldn't let them into the house.

"While on scene, DCS obtained a court order for the temporary custody of the two-year-old child," a police statement said. "The parents continued to ignore all attempts from DCS and officers to speak with them on the telephone or at the front door."

After one final warning, police broke down the front door.

"They said ‘Brooks, you have to come out of your house right now … we have to check on them,’ and I said, 'He’s doing fine, his temperature is 100 degrees. He's safe, he’s asleep, could you please just leave us alone,’” Bryce told NBC affiliate KPNX, according to its report Feb. 28.

"They saw me, and they asked me to put my hands up," Bryce said.

The father was handcuffed while police checked the home. The couple's three kids were placed in DCS custody.

“I mean, they treated us like criminals, busting in our door. I mean, I don’t know what kind of trauma that did to my kids. Where are my kids right now is what I want to know,” Beck said.

A lawyer for Beck said in a statement to NBC News on Thursday that the way in which the children were removed "was clearly unnecessary and well beyond 'reasonable force.'"

The statement continued that Beck "has a fundamental, Constitutionally protected right to the care, custody, and management of her Children. These rights do not evaporate simply because the Department of Child Safety believes they know better."

The police report said that when officers entered the house, two other children were found "in their bedroom, which was covered in stains of unknown origin."

"The children advised us they had vomited several times in their beds, and had stains around their mouths," the report said.

The home was in "total disarray," according to the report. "The children’s bedrooms were a mess and dirty with a bunch of items on the ground, which made it difficult to walk in the rooms."

An unsecured shotgun was also found up against a wall next to the parents' bed, the report said.

The 2-year-old and the other children, ages 4 and 6, were brought to Cardon Children's Medical Center, police said.

The Chandler Police Department is seeking one count of child abuse domestic violence charge against each parent.

State Rep. Kelly Townsend, who has worked on legislation requiring the DCS to get a search warrant before removing a child from a home, called the incident a "miscarriage of justice and a shame to the state of Arizona."

"This mother is nearly 9 months pregnant and her baby will be born soon. I have great concern that DCS will also take this infant over a misdiagnosis by the Dr., who thought the child might have meningitis, when actually he had RSV (Respiratory syncytial virus)," Townsend said in a statement Monday.

"I call on DCS to immediately return the children who are also being traumatized due to this misdiagnosis," the statement said. "The parents were correct, the doctor was wrong."

The Department of Child Safety said it could not comment on specific cases, but described the incident as standard practice.

"Two years ago, the DCS supported a law to require DCS specialists to obtain a court order prior to removing a child from their home," and a recently passed amendment gave law enforcement agencies assisting DCS authority to “use reasonable force to enter any building in which the person named in the removal authorization is or is reasonably believed to be," a DCS statement said.

"Since the laws took effect, DCS specialists have been obtaining court orders in child removals and seeking assistance from law enforcement agencies when necessary to ensure the safety of a child,” the statement said.

The Southwest College of Naturopathic Medicine did not immediately respond to a request for comment from NBC News.