Mitch McConnell blocked a resolution to release the full Mueller report, 3 days after saying he wanted 'openness and transparency' about it 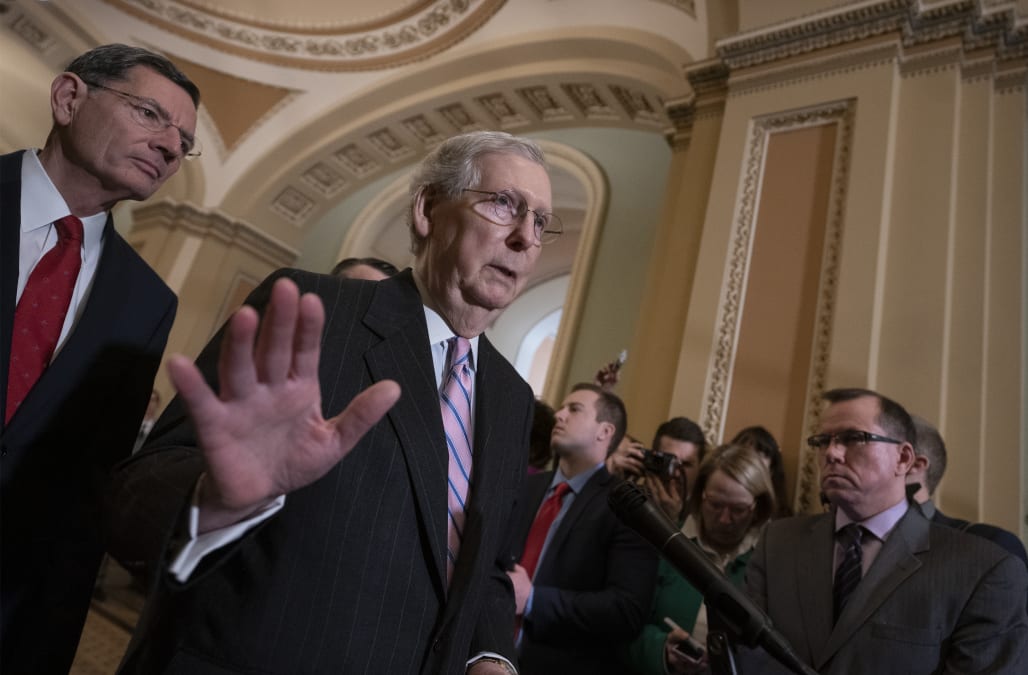 Senate Majority Leader Mitch McConnell blocked a resolution that called for Special Counsel Robert Mueller's full report to be released publicly, three days after he said he wanted "as much openness and transparency as possible" about the report.

McConnell blocked the non-binding resolution in the Senate on Monday, after it passed unanimously through the House. He cited national security, and said that Attorney General William Barr is working with Mueller to determine what can be released publicly.

"To date, the attorney general has followed through on his commitments to Congress. One of those commitments is that he intends to release as much information as possible," he said.

Senate Minority Leader Chuck Schumer, who put forward Monday's resolution, said the resolution did not call for the report to be released "immediately."

"I'm sort of befuddled by the majority leader's reasoning in this regard because it is not in the words of this resolution," he said, according to The Hill.

Barr sent a four-page summary of Mueller's report into Russian interference in the 2016 election and Donald Trump's presidential campaign to Congress on Sunday.

According to Barr's summary, the report says that the investigation found that neither Trump nor his presidential campaign conspired or colluded with Russia, though it did not exonerate him of obstructing justice.

McConnell wrote in a Twitter statement on Friday, after Mueller delivered his report to Barr, that he appreciated Barr's intention to "provide as much information as possible" about the report.

"As I have said previously, I sincerely hope he will do so as soon as he can, and with as much openness and transparency as possible," he said.

Democrats areaccusing Barr of bias after he concludedin his summary that Trump did not obstruct justice in the FBI's Russia investigation.

John Dean, who was President Richard Nixon's lawyer during the Watergate scandal, said on Monday that Barr may be hiding something "fairly ugly" from the report.

Trump has used Barr's summary to declare that he has been vindicated, and has started using the summary to fundraise for his 2020 re-election campaign.

However, lawmakers are calling for the report to be made public, arguing that doing so will allow for a full picture of Russia's interference and any other potential wrongdoing by Trump, his associates, or Russian operatives that may be outlined in the full report.

Schumer made a call for bipartisan transparency from the Senate floor on Monday.

"Whether or not you're a supporter of President Trump ... there is no good reason not to make the report public," he said.

"It's a simple request for transparency. Nothing more, nothing less."

One former senior Justice Department official who previously worked closely with Mueller told Business Insider that the investigation "may not have found evidence that rose to the level of criminal conduct."

"That doesn't mean they didn't find evidence of wrongdoing. If — or when — Congress and the public get that information, it will undoubtedly create another firestorm for the president."

Democrats also want to use the underlying evidence from the investigation to fuel their own inquiries into Trump and his administration, some of the many investigations still underway into Trump.

Trump said on Monday that the release of the full report "wouldn't bother me at all."

When asked by reporters if the full report should be made public, he said: "It's up to the attorney general, but it wouldn't bother me at all."

More from Business Insider:
The Trump administration says it supports striking down the entire Affordable Care Act
Mike Pompeo says it's 'certainly' possible that Trump may be the modern-day savior of the Jewish people
Jared Kushner had a rough week and it doesn't look like it's going to get any better