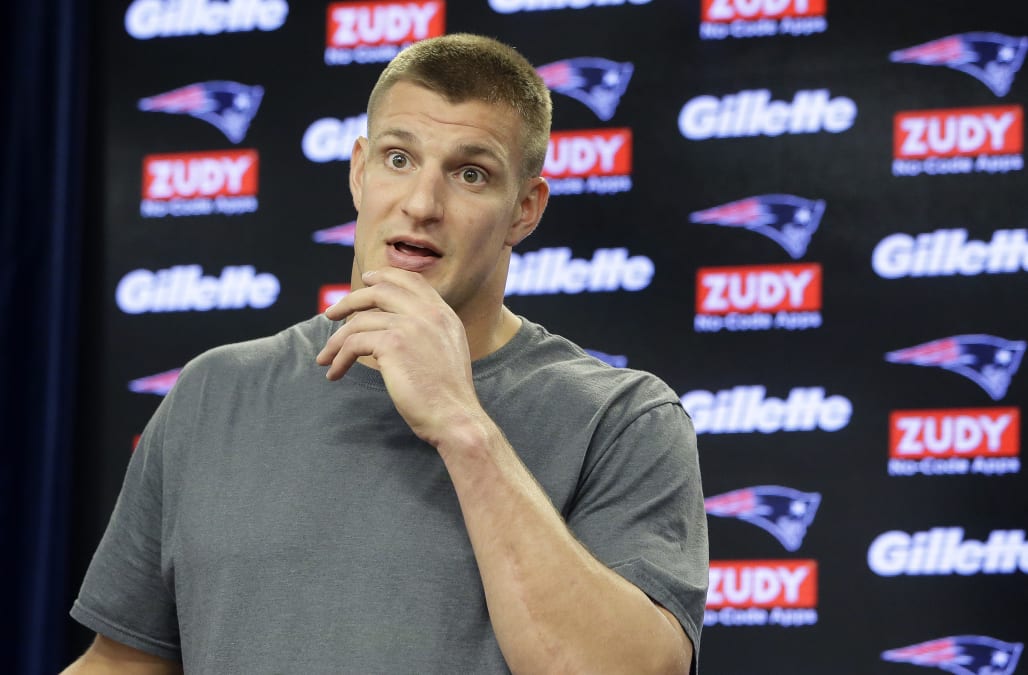 Rob Gronkowski hasn’t been retired 24 hours, and we already have our first speculation on whether he could come back.

And not just from some yo-yo on Twitter either. It was Gronk’s agent who floated the idea.

NBC’s Peter King spoke with agent Drew Rosenhaus, who represented the New England Patriots tight end for his career, and King had a very interesting note to pass along.

“So that’s it … or is it? Rosenhaus said it wouldn’t shock him if Gronkowski decided to come back sometime in 2019. We’ll see. There’s nothing to indicate a return to football now.”

That last line is a hoot. And that’s not a knock on King, by the way. It just seems like a sign of the times when we must qualify a player’s retirement by suggesting mere hours later that there’s no indication he is immediately going to change his mind.

But there was a second quote from Rosenhaus on ESPN:

Drew Rosenhaus on @GetUpESPN on Rob Gronkowski’s future: “If the team was struggling or they needed him at some point next year, and let’s just say hypothetically Tom Brady gave him a call and said ‘Rob, I need you.’ I wouldn’t be shocked if he came back to play a few games.”

Why would Gronk come back?

Gronkowski’s legacy is unique and singular, so he certainly doesn’t need to come back. He’s almost a mortal-lock Hall of Famer despite never playing a snap at the age of 30 or older. He turns the big three-oh on May 14.

The Patriots will arrive at training camp with new faces at tight end and wide receiver, a few of them likely to be rookies. None will be as impactful as Gronk. Josh Gordon certainly can’t be counted on. Julian Edelman is great but might not be able to shoulder the load without some serious help.

Maybe the Patriots get off to a slow start, or maybe Tom Brady is having a tough time finding open receivers. Maybe he places a call to his bro.

Could it happen? Oh, sure. And we suspect Gronk isn’t just going to let himself go completely. This would seem like a gym-tan-laundry kind of guy who still could live in the gym five or more days a week.

We’ve seen what Gronk returning from injury has done to ignite previous Patriots offenses in the past, so it certainly would make sense from the team’s perspective. And it’s possible that he misses it all: the camaraderie, the competition, getting yelled at by Bill Belichick. It’s a void that’s hard to fill.

But given that Gronkowski clearly has been thinking about this decision for years now — and King spoke with former Gronk teammate Dwayne Allen, who said he’s been talking about the idea since last season — it feels like he might actually be gone for good.

Don’t expect this to turn into a Favre-ian #GronkWatch type of situation.

For what it’s worth, betonline.ag has some odds on what Gronk’s next career choice might be — you know, before the possible comeback. You can wager on Rob’s job:

As tempting as the stripper and Canada bets are, we can probably shift our focus to one of the first three options. Wresting and acting have always been the assumptions.

But at 10/1 odds, you might as well throw a few bucks on the comeback to the NFL. Sure, this could be an agent who wants his 3 percent of $10 million talking, but it also could be an indication that his client might day suffer from a fear of missing out.

More from Yahoo Sports:
'One of the best to ever do it': NFL reacts to Rob Gronkowski's retirement
Robert Kraft breaks his silence, issues statement following prostitution arrest
Report: Colin Kaepernick, Eric Reid received less than $10 million from NFL in grievance settlement