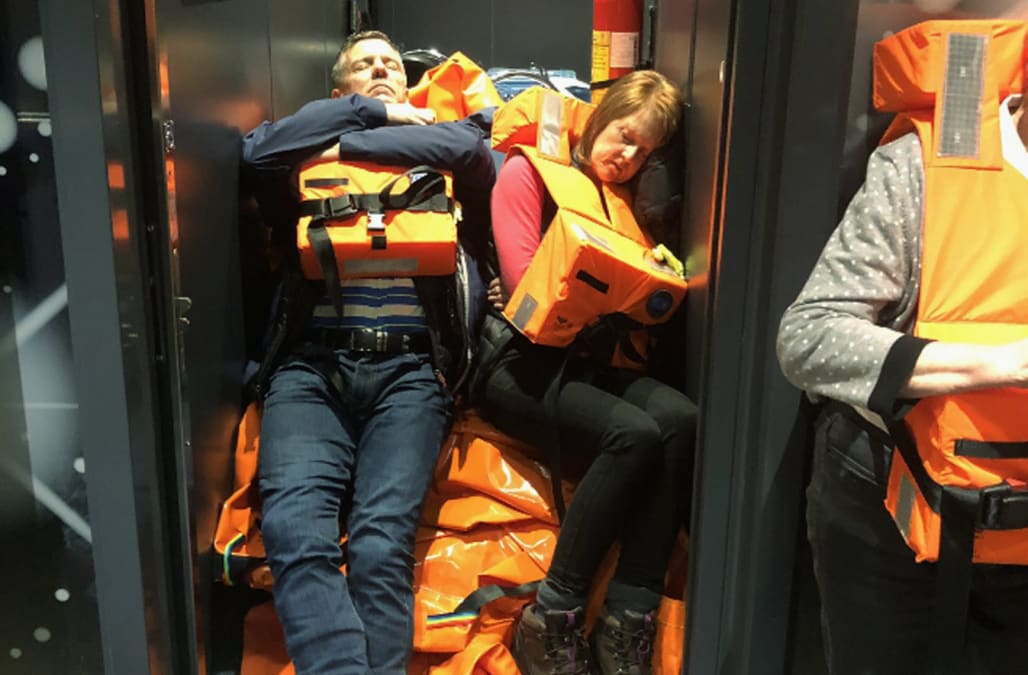 STAVANGER, Norway (AP) — More than 450 passengers were airlifted off a cruise ship that got stranded off Norway's western coast in bad weather before the rescue operation was suspended Sunday so the vessel could be towed to a nearby port, Norwegian authorities said.

Five helicopters flying in the pitch dark took the evacuated passengers from the tossing ship in a painstaking process that continued throughout the night. The rescues took place under difficult conditions that included wind gusts up to 38 knots (43 mph) and waves over 8 meters (26 feet).

Some 17 people were hospitalized with injuries, police said.

Passenger Alexus Sheppard told The Associated Press in a message sent from the Viking Sky that people with injuries or disabilities were winched off the cruise ship first. The atmosphere onboard grew calmer after the rescue operation's first dramatic hours, Sheppard said.

RELATED: How to avoid getting seasick when on a cruise

How to avoid getting seasick while on a cruise

A lot of people feel queasy once on board. Consequently, most cruise lines offer anti-nausea pills at their guest service counters at no extra charge. The motion sickness medicine will help until your body becomes accustomed to the movement of the ship.

You can also purchase your own anti-nausea medicine, like Dramamine, before you depart.

A cabin with windows and a balcony will allow more air and light into the room, alleviating queasiness. Alternatively, an indoor cabin can exacerbate these symptoms.

The location of the cabin can do wonders as well. According to Cruise Critic, cabin location is "a question of engineering, really." Choose a cabin lower and more central to the rest of the ship -- you won't feel the ship's movement nearly as much.

"The higher decks and cabins at the very front (forward) or back (aft) of the ship will rock and roll the most," they said.

3. You can still manage in an indoor cabin.

While an outdoor/balcony cabin is better for those prone to seasickness, an indoor cabin might be okay. One insider insists the TV should be turned onto the "ship camera" channel. It "will create the illusion of having a window when you have an inside room."

4. Invest in a relief band

It may be expensive, but a relief band could be your cure. Many cruise-goers insist on this small device, which fits on your wrist like a watch.

This FDA-approved device ($99 on Amazon) has been proven to stop motion sickness and nausea -- just remember batteries!

If you call room service and complain of seasickness, more likely than not they'll send you up a bottle of ginger ale, saltines and green apples.

Vacationers swear by green apples. For many people, the sour taste is the cure for all sorts of motion sickness.

6. Keep your eye on the horizon

In doing so, your brain "can use the horizon as a point of reference." It helps in reminding your brain that you are moving, solving the conflict between your ears and your eyes.

7. Your journey and time of year matters.

The rockiness of the boat can depend on the season or even the route of the cruise. Sailing across the Atlantic may face rougher waters than cruising in the Caribbean.

If you're going to the Caribbean, it might best to avoid the summer or fall (aka hurricane season). You don't want choppy waters, high wind or rain.

8. Go with a more modern ship

No, not for safety concerns. Big ships that were built recently were probably built with stabilizers. Also used in ferries, the stabilizers are used to help prevent seasickness.

9. Talk to your doctor about anti-nausea medicine.

You can also purchase your own anti-nausea medicine, like Dramamine, before you depart.

Some doctors believe that posture can influence how your body reacts to movement, like the rocking of a boat. If you're feeling nauseous, try sitting upright or with a pillow to support the neck.

"It was frightening at first. And when the general alarm sounded it became VERY real," she wrote.

Photos posted on social media showed the ship listing from side to side, and furniture smashing violently into walls.

"We saw two people taken off by stretcher," another passenger, Dereck Brown, told Norwegian newspaper Romsdal Budstikke. "People were alarmed. Many were frightened but they were calm."

The Viking Sky carried 1,373 passengers and crew members when it had engine trouble in an unpredictable area of the Norwegian coast known for rough, frigid waters. The crew issued a mayday call Saturday afternoon.

Police said the crew, fearing the ship would run aground, managed to anchor in Hustadvika Bay so the evacuations could take place.

Coast guard official Emil Heggelund estimated to newspaper VG that the ship was 100 meters (328 feet) from striking rocks under the water and 900 meters (2,953 feet) from shore when it stopped.

The ship was visiting the Norwegian towns and cities of Narvik, Alta, Tromso, Bodo and Stavanger before its scheduled arrival Tuesday in the British port of Tilbury on the River Thames. The passengers mostly were a mix of American, British, Canadian, New Zealand and Australian citizens.

The airlifts continued at a steady pace Sunday morning, as the vessel was being prepared for towing by two tugboats to the nearby town of Molde, according to Per Fjerd at the Joint Rescue Coordination Center.

The helicopters stopped taking people off the ship when the ship was ready for the trip to shore, and 463 passengers had been evacuated by that time, the Joint Rescue center said. Three of the ship's four engines were working as of Sunday morning, the center said.

The Viking Sky, a vessel with a gross tonnage of 47,800, was delivered in 2017 to operator Viking Ocean Cruises.