Iowa falls to Tennessee in overtime despite record-setting comeback 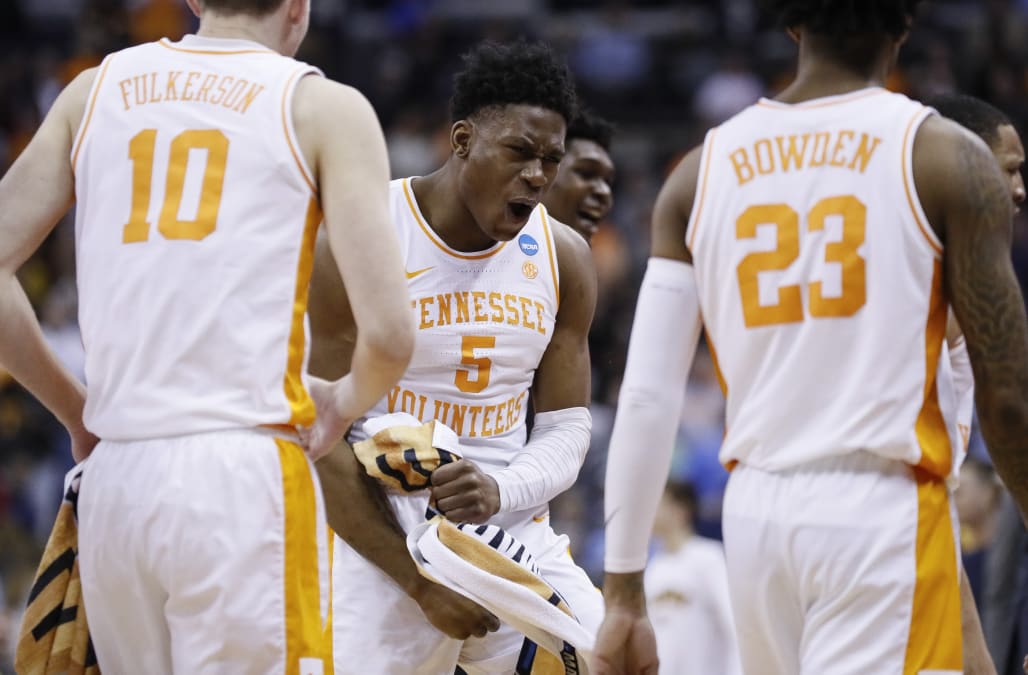 Buried under the weight of a 25-point deficit late in Sunday’s first half, 10th-seeded Iowa could have easily given up hope.

The Hawkeyes instead kept scratching and clawing their way to daylight, nearly pulling off a record-setting comeback.

Iowa almost became the second team in NCAA tournament history to rally from a 25-point deficit, but the Hawkeyes couldn’t finish the job in overtime. Grant Williams scored six of his 19 points in the extra period, helping second-seeded Tennessee escape with a 83-77 victory and advance to the Sweet 16 for the first time since 2014.

Had Iowa won in overtime, it would have made history.

In some ways, Iowa’s near-miss against a team once ranked No. 1 in the nation is a massive achievement. The Hawkeyes were left for dead just a week ago when they entered the NCAA tournament having dropped six of their past eight games including a terrible home loss to Rutgers.

The best March Madness 2019 mascots
IRVINE, CA - FEBRUARY 06: UC Irvine mascot Peter the Anteater has some fun with court-side fans during their men's basketball game against Cal State Fullerton at Bren Events Center in Irvine on Wednesday, February 6, 2019. UC Irvine defeated Cal State Fullerton 60-53. (Photo by Kevin Sullivan/MediaNews Group/Orange County Register via Getty Images)
SALT LAKE CITY, UT - DECEMBER 08: The Utah State mascot Big Blue just before a game between the Weber State Wildcats and the Utah State Aggies on December 08, 2018, at Vivint Smart Smart Home Arena in Salt Lake City, Utah.(Photo by Boyd Ivey/Icon Sportswire via Getty Images)
BROOKLYN, NY - MARCH 14: Saint Louis Billikens mascot during the first half of the Atlantic 10 Tournament second round college basketball game between the St Louis Billikens and the Richmond Spiders on March 14, 2019 at Barclays Center in Brooklyn, NY. (Photo by John Jones/Icon Sportswire via Getty Images)
Jan 19, 2019; Oxford, MS, USA; Mississippi Rebels mascot Tony the Landshark stands behind the court during the second half against the Arkansas Razorbacks at The Pavilion at Ole Miss. Mandatory Credit: Matt Bush-USA TODAY Sports
NORFOLK, VA - MARCH 06: The Old Dominion Monarchs mascot on the floor during a college basketball game against the Southern Miss Golden Eagles at the Ted Constant Convocation Center on March 6, 2019 in Norfolk, Virginia. (Photo by Mitchell Layton/Getty Images) *** Local Caption ***
LAS VEGAS, NEVADA - MARCH 14: The Oregon Ducks mascot The Duck walks on the court with the ball in its mouth during a quarterfinal game of the Pac-12 basketball tournament against the Utah Utes at T-Mobile Arena on March 14, 2019 in Las Vegas, Nevada. (Photo by Ethan Miller/Getty Images)
LAS VEGAS, NEVADA - MARCH 15: The Washington Huskies mascot Harry the Husky plays basketball before a semifinal game of the Pac-12 basketball tournament against the Colorado Buffaloes at T-Mobile Arena on March 15, 2019 in Las Vegas, Nevada. The Huskies defeated the Buffaloes 66-61. (Photo by Ethan Miller/Getty Images)
BROOKLYN, NY - NOVEMBER 19: The Temple Owls Mascot during the first half of the Legends Classic College Basketball Game between the Virginia Commonwealth Rams and the Temple Owls on November 19, 2018 at the Barclays Center in Brooklyn, NY. (Photo by Rich Graessle/Icon Sportswire via Getty Images)
CHARLOTTESVILLE, VA - FEBRUARY 02: Cavman, the Virginia Cavaliers mascot, performs before the start of a game against the Miami Hurricanes at John Paul Jones Arena on February 2, 2019 in Charlottesville, Virginia. (Photo by Ryan M. Kelly/Getty Images)
Mar 11, 2019; Uncasville, CT, USA; The UCF Knights mascot performs during a timeout in the second half during in the women's American Conference Tournament against the UConn Huskies at Mohegan Sun Arena. UConn defeated UCF 66-45. Mandatory Credit: David Butler II-USA TODAY Sports
LAS VEGAS, NEVADA - MARCH 12: The Saint Mary's Gaels mascot and cheerleaders line up on the court before the championship game of the West Coast Conference basketball tournament between the Gaels and the Gonzaga Bulldogs at the Orleans Arena on March 12, 2019 in Las Vegas, Nevada. The Gaels defeated the Bulldogs 60-47. (Photo by Ethan Miller/Getty Images)
Up Next

In other ways, coming so close and falling short has to be especially frustrating because Iowa was trying to end a 20-year drought without a single appearance in the Sweet 16. The Hawkeyes had been in the round of 32 twice before under Fran McCaffery, and they endured a pair of humbling blowout losses to Gonzaga and Villanova.

Tennessee aided Iowa’s comeback effort with needless fouls, inconsistent effort and sloppy turnovers. Especially costly was Admiral Schofield picking up his third foul with 16 minutes remaining, forcing the Vols to play without one of their stars and emotional leaders for long stretches of the second half.

Iowa forged its first tie under controversial circumstances when referees mistakenly whistled Lamonte Turner for a foul even though he seemed to cleanly block Jordan Bohannon’s 3-point shot. Bohannon sank all three foul shots, tying the score at 67 with less than three minutes to play.

Can Tennessee challenge this “foul?” pic.twitter.com/mbkITuZMHt

Undaunted, Turner answered with maybe the biggest shot of regulation, a corner 3-pointer that restored Tennessee’s advantage. The Vols actually led by four in the final minute, but Iowa came back to force overtime on an Isaiah Moss jumper and a pair of Joe Wieskamp foul shots.

In a very strange twist, Tennessee secured the victory in overtime without Schofield coming off the bench. The Vols’ second-leading scorer said after the game that he told Rick Barnes to keep playing Kyle Alexander instead of him.

For Tennessee, avoiding a historic meltdown also meant staving off a second straight early NCAA tournament exit. Last year, the Vols lost at the buzzer in the opening round to eventual Final Four team Loyola-Chicago.

Tennessee has greater ambitions this year after the Vols contended for the SEC title and spent the entire season ranked in the top 10. They’ll face third-seeded Purdue next week with a berth in the program’s second-ever Elite Eight at stake.