Beto O'Rourke a threat to Biden on right, Sanders on left 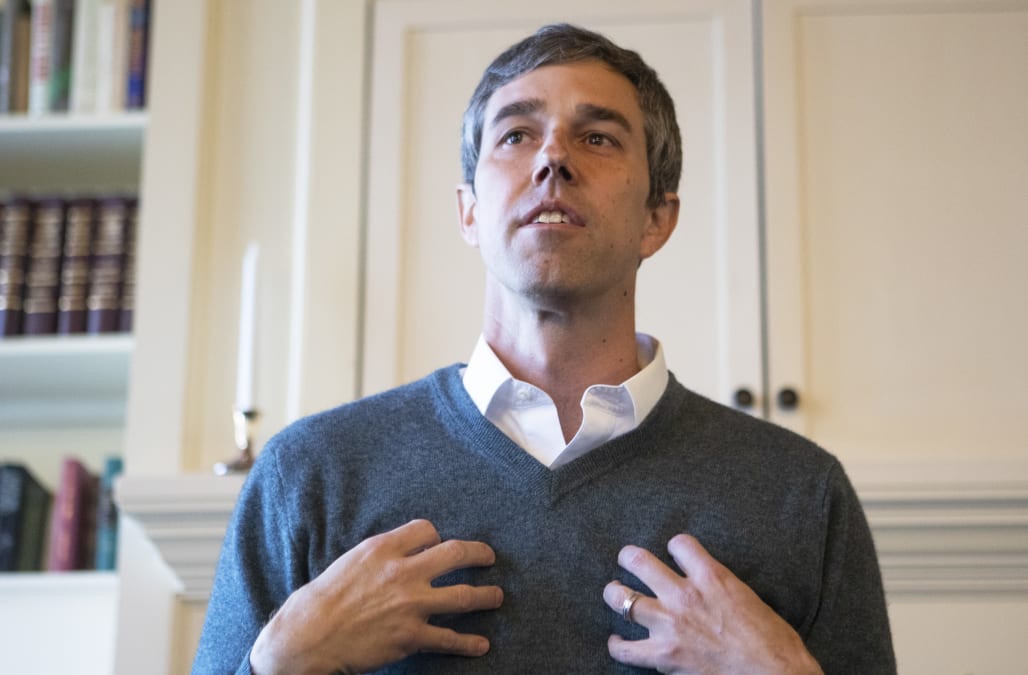 CLEVELAND — By the time Beto O'Rourke arrived at Gino's Cento Anno, a small dive bar popular with union workers, the TVs had been switched off Fox News and Wally Huskonen was ready to hear from someone other than the two men leading every poll of the 2020 Democratic presidential field.

"Biden is too old, and I am speaking as someone near his age," Huskonen, an 81-year-old ex-Republican, said earlier this week of former Vice President Joe Biden, 76, who is all-but-certain to enter the race soon. "Same with Bernie (77 years old). And the way Bernie (Sanders) talks about socialism…it's not the fact that he is talking about it, it's the way he talks about it."

"Beto's theme of bringing people together really resonates with me. This division is very unsettling," Huskonen added.

If O'Rourke is to climb in the polls, his campaign minivan is on a collision course with one or both of the other white men atop the field — but which?

While Sanders' allies have worried that O'Rourke could eat into the Vermont senator's base of young progressives, Biden may end up being the one with the most to lose among mainline Democrats more concerned with electability than political revolution.

Instead of shoring up his progressive bona fides in the face of left-flank attacks, O'Rourke has emphasized a Biden-esque message of civility while making a case that he can win the White House by stumping in the very Midwest states that Biden allies argue "Middle-Class Joe" is most capable of carrying.

"Because he generates so much excitement, a lot of people think Beto is a real threat to Bernie Sanders," said Bill Press, a liberal talk radio host who has hosted meetings of Sanders' kitchen cabinet. "Actually, for that very reason, plus the fact that he's closer to Biden than Bernie on the issues, I think Beto's much more of a threat to Joe Biden."

"Some Democrats are asking: If you already have a more exciting, younger, centrist white male in the race, why do you need Joe Biden?" Press said.

O'Rourke might dispute the "centrist" characterization, noting he never backed away from liberal issues while running for Senate last year in Texas against Sen. Ted Cruz. And, as a presidential candidate, he's called capitalism "racist," vocally supported legalizing marijuana and spoken bluntly on immigration.

But those are the B-sides of his message.

The core of O'Rourke's stump speech is about inclusion, sounding more like Biden, who has been dinged by the left for speaking warmly of Republicans, than Sanders or Sen. Elizabeth Warren, D-Mass., who portray their campaigns as us-versus-them fights against a corrupt political system.

The former Texas congressman has repeatedly declined to call himself a "progressive," saying he doesn't like labels, and refused to adopt ideological litmus-test issues, like Medicare for All.

"Let's make sure that before we are Democrats or Republicans, we see each other as Americans and human beings and treat one another accordingly," O'Rourke said in Cleveland, repeating one of his common refrains.

And O'Rourke, who draws comparisons to Barack Obama on the stump, is even challenging one of Biden's chief assets — his association with the popular former president.

"People underestimate how difficult it is to run from the lead position," said Democratic strategist Chris Kofinis.

Of course, Biden hasn't even entered the race yet and polling at this point is likely on his high name recognition.

"I honestly think it is way too early," said Robert Wolf, the CEO of 32Advisors and a major Democratic donor who advised Obama and has been in touch with both the Biden and O'Rourke camps. "I do think that Beto's launch...from his fundraising intake to his road trip from Iowa to New Hampshire with stops in the 'Blue Wall' states, was quite incredible and you could see the grassroot excitement grow each and every day."

Older white voters who turned out to O'Rourke's events in the midwest nearly universally expressed fondness for Biden, but also concerns about the former vice president, even if they weren't fully sold on O'Rourke.

"I think Biden is smart and a superb human being, but I think we need new ideas," said Carolyn Harryman, who came to O'Rourke's first campaign event in Keokuk, Iowa, and said beating Trump is her biggest concern in 2020.

Sharon Quinn, a 70-year-old retiree from Scranton, Pennsylvania, Biden's hometown, worried what a run would do to the former vice president's family.

"Trump will eviscerate his family, his past, everything. I think he could be an excellent secretary of state, or something like that. We have a lot of fear for him if he runs," she said.

"Beto is a blank slate," Quinn continued. "He has intellectual curiosity and authenticity that we're looking for."