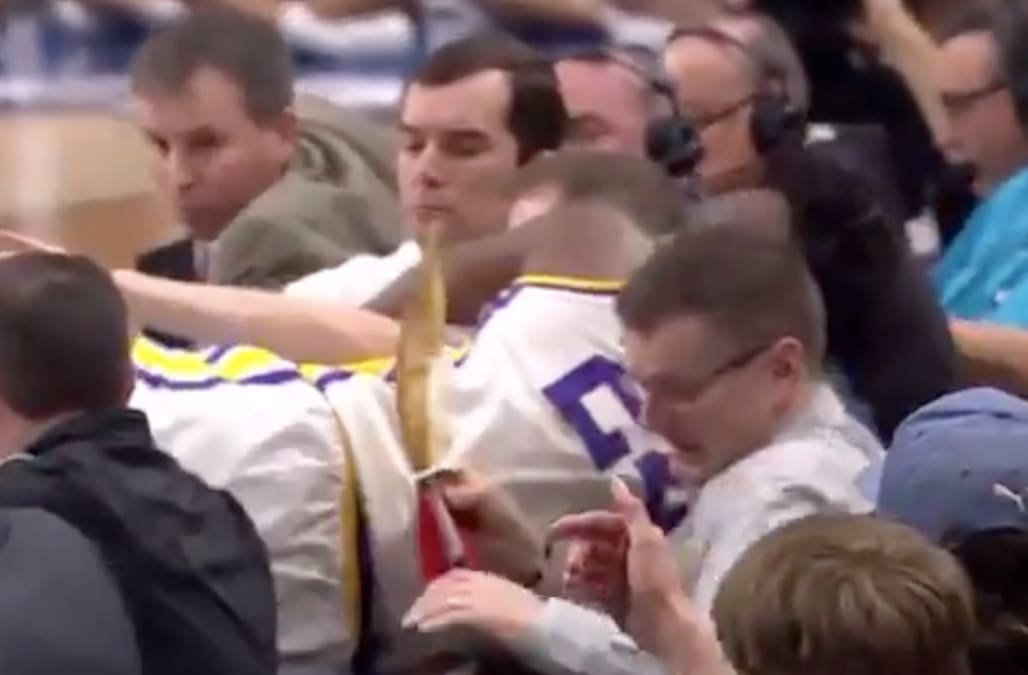 The first set of games on the first Thursday of the 2019 NCAA tournament was relatively uneventful ... until, in the second half of a 3-14 matchup between LSU and Yale, LSU freshman Emmitt Williams went flying over the scorer’s table.

Williams failed to save the loose ball from going out of bounds. Instead, the outcome was better: he took out a member of a courtside radio crew, sending the man flying backwards in his chair:

The man who took the charge was Kevin Ingram, Belmont’s play-by-play announcer. Ingram was preparing for the second game of the afternoon in Jacksonville, Belmont vs. Maryland. His preparations were rudely interrupted by a chiseled, 6-foot-7 flying object.

The biggest casualty, though, was Ingram’s drink – reportedly a Diet Coke:

The aftermath looked like a bit of a mess:

But Ingram, quite the trooper, was not only unaffected by the collision. He stuck with the shirty that likely had sticky soda all over it. His hotel, 30 minutes away, wasn’t reachable. The stain, fortunately, wasn’t that bad.

LSU held an 18-point lead early in the second half. Williams’ tumble over the table came during a gradual Yale comeback, despite the Bulldogs shooting 8-for-37 (22 percent) from 3. They cut the lead to as little as three late in the second half.

But the Tigers held on for a 79-74 victory. They’ll advance to play either Maryland or Belmont on Saturday.

This, however, is the first iconic image of March: