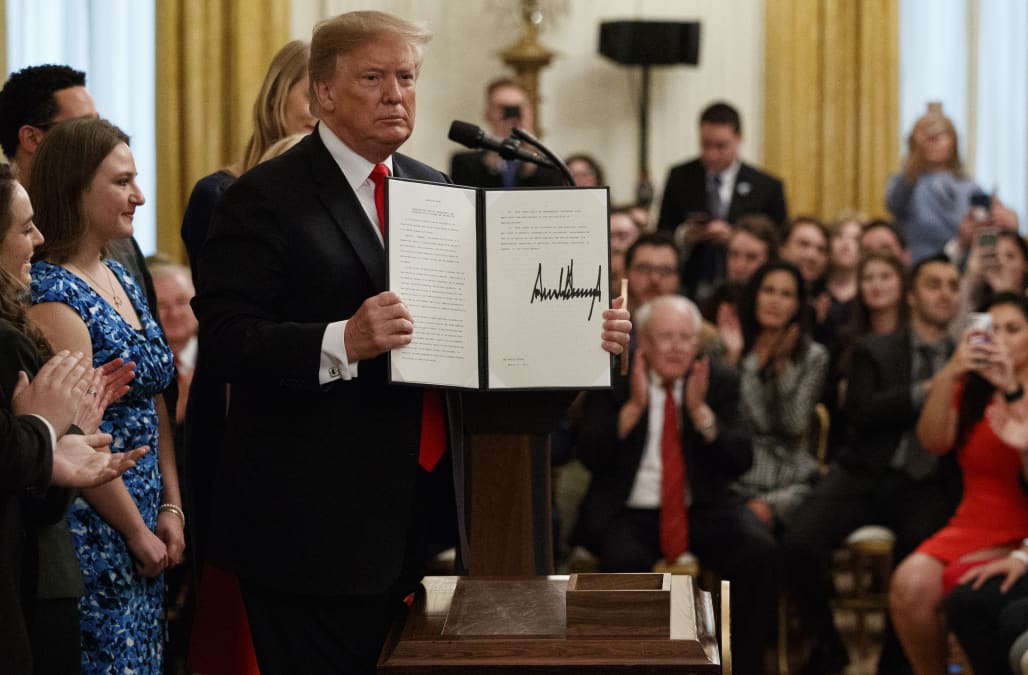 President Trump signed an executive order on Thursday afternoon that the White House has billed as an effort to “improve Transparency and Promote Free Speech In Higher Ed.” The move comes after years of complaints from conservative activists that college campuses are hostile to right-leaning views and speakers.

But while Trump’s order is a clear declaration that he agrees with conservative concerns about America’s colleges, it’s not clear what effect the move will have in academia.

“In America, the very heart of universities’ mission is preparing students for life as citizens in a free society, Trump said at the signing ceremony. “But even as universities have received billions and billions of dollars of dollars from taxpayers, many have become increasingly hostile to free speech and the first amendment.”

Trump in his speech referenced some of the cultural buzzwords that have emerged in recent years during debates about speech at universities, such as “safe spaces” and “trigger warnings,” but it’s unclear under what circumstances universities would face repercussions based on this new order.

On a White House press call Thursday morning, a senior administration official told reporters the order “directs 12 grant-making agencies to use their authorities over federal grants … to ensure those institutions that receive federal research or education grants promote free inquiry through compliance with all applicable federal laws, regulations and policies.”

The official, who would not be identified by name, praised the order and said it stemmed from the Trump administration’s conviction that “public colleges and universities should fulfill their obligation to uphold the First Amendment.” However, the official could not, when asked, provide concrete answers about how the order would be implemented or what impact the White House expects it to have on campuses.

The order would affect both public and private schools that receive federal grants. In addition to requiring those schools to “promote free inquiry,” the order also directs the government to obtain more detailed data about the debt taken on by students at schools and their subsequent earnings.

When asked about the actual effect the order might have on college campuses, the official said grant-making dollars would be tied to this new requirement, and “schools will have to certify that they're following this condition.”

However, the official could not provide any specific description of what the requirements would be beyond saying it “would not get into specific areas of free speech.”

So far, the order is short on details about how this requirement would be enforced. “I won't get into implementation details,” the official said on the call.

The official also indicated it would be the colleges and universities themselves that certified whether they were in compliance. “The institutions will have to certify — or agree to follow these as a condition of receiving the grants,” the official said.

On Wednesday evening, the Wall Street Journal published an article previewing the order that said a senior administration official indicated Cabinet agencies would be “free to draw up their own guidelines that could outline what the administration considers noncompliance with the First Amendment.”

The Wall Street Journal pointed out that the order did not include “more sweeping or specific measures” that universities feared could be coming from Trump. However, the article quoted Suzanne Nossel, president of Pen America, a liberal group dedicated to protecting “open expression,” who said the order was clearly a warning to the academic community.

“This executive order is kind of a shot across the bow to universities that’s meant to put them on notice, that they’re being watched and scrutinized,” Nossel said.

That article was distributed by the White House on Thursday morning as part of the official rollout for the order.

More from Yahoo News:
Kellyanne Conway says Trump is 'protective of me'
‘You are a child,’ McCain’s youngest daughter tells Trump
Ocasio-Cortez fires back at Fox News for 'Latina thing' segment