Kellyanne Conway says Trump is 'protective of me' 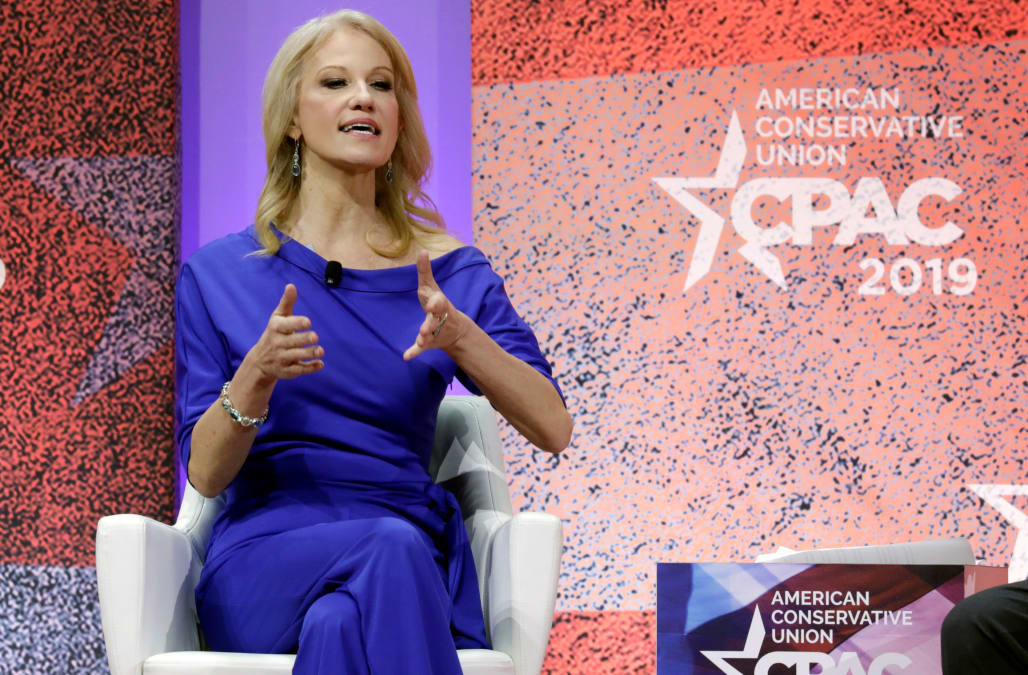 White House counselor Kellyanne Conway on Thursday continued to defend her boss, President Trump, who called her husband, George, a “whack job” and whose feud with him is “doing a tremendous disservice to a wonderful wife.”

“He’s protective of me,” Conway said about the president in an interview Thursday with Fox Business’s Maria Bartiromo.

“I appreciate the president defending what he thinks is unfairness,” Conway said.

Conway's defense is the latest twist in an ongoing three-way psychodrama involving her, her husband and the president, which began when earlier this month George Conway called for a “serious inquiry” into Trump’s mental health “whether or not impeachment is in order.”

In recent days George Conway, a prominent conservative lawyer, tweeted about his wife’s boss. “His condition is getting worse,” Conway wrote, after citing sections from the Diagnostic and Statistical Manual of Mental Disorders defining narcissistic personality disorder and antisocial personality disorder.

Firing back, Trump tweeted: “George Conway, often referred to as Mr. Kellyanne Conway by those who know him, is VERY jealous of his wife’s success & angry that I, with her help, didn’t give him the job he so desperately wanted. I barely know him but just take a look, a stone cold LOSER & husband from hell!”

Conway responded to Trump in three words: “You. Are. Nuts.”

Following the war of words, Kellyanne Conway came out in defense of the president.

In an interview with Politico Wednesday, she said Trump hadn’t previously responded to her husband out of respect for her.

“But you think he shouldn’t respond when somebody, a non-medical professional, accuses him of having a mental disorder? You think he should just take that sitting down?” she asked. “The president is obviously defending me.”

George Conway told the Washington Post this week that although he is proud of his wife, he wished she did not work for the White House.

Kellyanne Conway said her husband’s public attacks on Trump are “unlike him ... because he’s traditionally been a very private person.”

“This is new,” Conway told Bartiromo about her husband’s public grievances with her boss. “What also is new is not supporting the agenda of the president and my work there.”

Conway went on to explain her family dynamic when it comes to her and her husband’s work, saying he pulled out of a position in the Justice Department because the two “decided as a family it’s not the right time for both of us to have big jobs in the federal government. That he'll stay in the private sector, that he still supports the work of the administration and of course his ‘wonderful wife.’”

Conway also pointed out that her husband is “not a psychiatrist,” and in reference to her husband’s inquiry about Trump’s state of mind, she added that “he can't act on those tweets in a way.”

“I was raised in a household of strong Italian Catholic women that taught me you air grievances like that in private,” Conway told Bartiromo, “so it is very surprising to see it be so public.”

She added: “Until this week this was my private life, not my professional life. George is not Bob Mueller. He’s not Jeff Berman. He’s not Rod Rosenstein.”

She also took a dig at the media attention on her marriage, referring to reporters as “self-designated marriage experts.”

“I don’t know when the feminists are going to write the story about the unusual situation of a man getting power through his wife,” she said, “but that’s what we have here.”