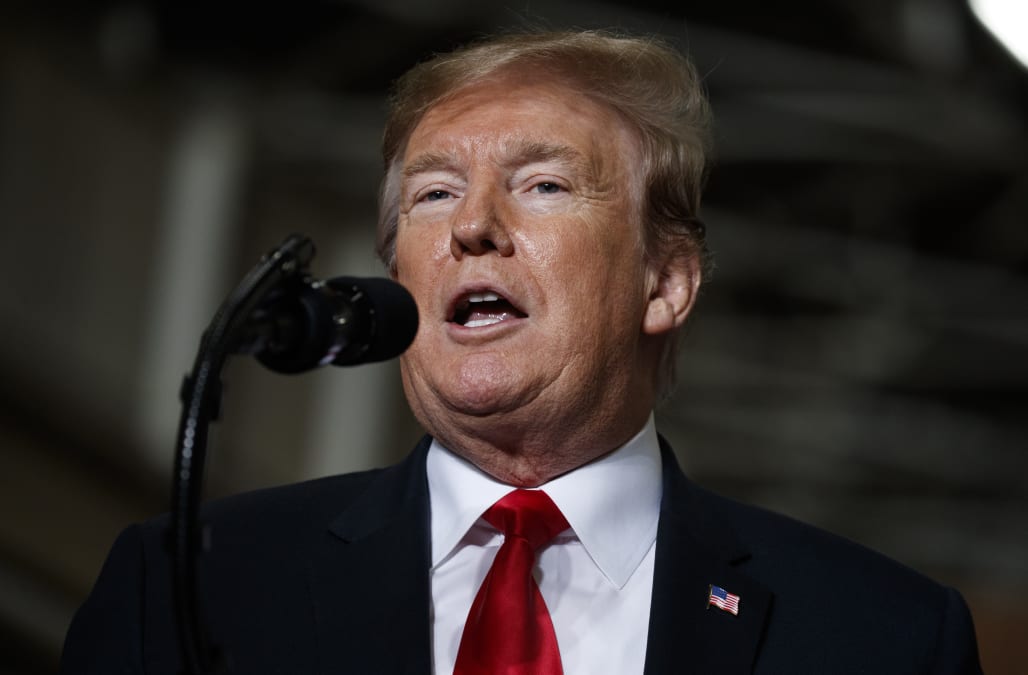 At a speech at an Ohio tank factory, President Trump complained that he wasn’t thanked for giving John McCain “the kind of funeral he wanted.”

“I gave him the kind of funeral he wanted which as president I had to approve. I don’t care about this, I didn’t get thank you, that’s OK,” Trump said, to a crowd of workers at the Lima Army Tank Plant in Lima, Ohio.

The audience, which had applauded and cheered through much of the speech, sat virtually silent during the attack on the late senator and decorated war hero.

Trump’s remarks about McCain’s funeral and his burial at the U.S. Naval Academy in Annapolis, Md., last September came in a speech that was marked by a long list of grievances about the former Arizona senator, part of a days-long assault.

“A lot of people are asking, because they love me and they ask me about a man named John McCain,” Trump said. “If you want me to tell you about — should I or not? Yes?”

A handful of workers in the audience obliged the president, shouting, “Yeah!”

“So I have to be honest, I’ve never liked him much. Hasn’t been for me,” Trump said, the room descending into awkward silence.

“I’ve really probably never will, but there’s certain reasons for it and I will tell you, and I do this to save a little time with the press later on, John McCain received a fake and phony dossier, did you hear about the dossier? It was paid for by crooked Hillary Clinton, right,” Trump continued, to a smattering of boos. “And John McCain got it, he got it, and what did he do? He didn’t call me. He turned it over to the FBI hoping to put me in jeopardy, and that’s not the nicest thing to do. You know when those people say, because I’m a very loyal person...”

Trump proceeded to bash McCain for campaigning on repealing and replacing the Affordable Care Act but voting against a Republican bill that would have done just that.

“And the other thing is, we’re in a war in the Middle East that McCain pushed so hard,” Trump said, the silence seeming to grow. “He was calling Bush, President Bush all the time, ‘Get into the Middle East, get into the Middle East.’ So now we’re into that war for $7 trillion, thousands and thousands of our people have been killed, millions of people overall, and frankly, we’re straightening it out now but it has been a disaster for our country.”

Trump said the war was “worse than it was 19 years ago.” The invasion of Iraq actually began 16 years ago. The United States was not at war in the Middle East in 2000.

With the tension on the factory floor growing with each passing insult, Trump finally wound down the McCain section of his remarks.

“Now we’re all set. I don’t think I have to answer that question, but the press keeps — ‘What do you think of McCain? What do you think?’ — Not my kind of guy, but some people like him and I think that’s great.”

Today and every day I miss my good friend John McCain. It was a blessing to serve alongside a rare patriot and genuine American hero in the Senate. His memory continues to remind me every day that our nation is sustained by the sacrifices of heroes.

Trump joked about climbing into a tank at the factory, recalling how Michael Dukakis, the 1988 Democratic candidate for president, hurt his campaign by being photographed atop a tank turret.

“I remember he tanked when he got into the tank,” Trump said.

More from Yahoo News:
Trump rails against 'husband from hell' George Conway
Trump is 'looking into' Facebook 'bias' as aide melts down over suspension