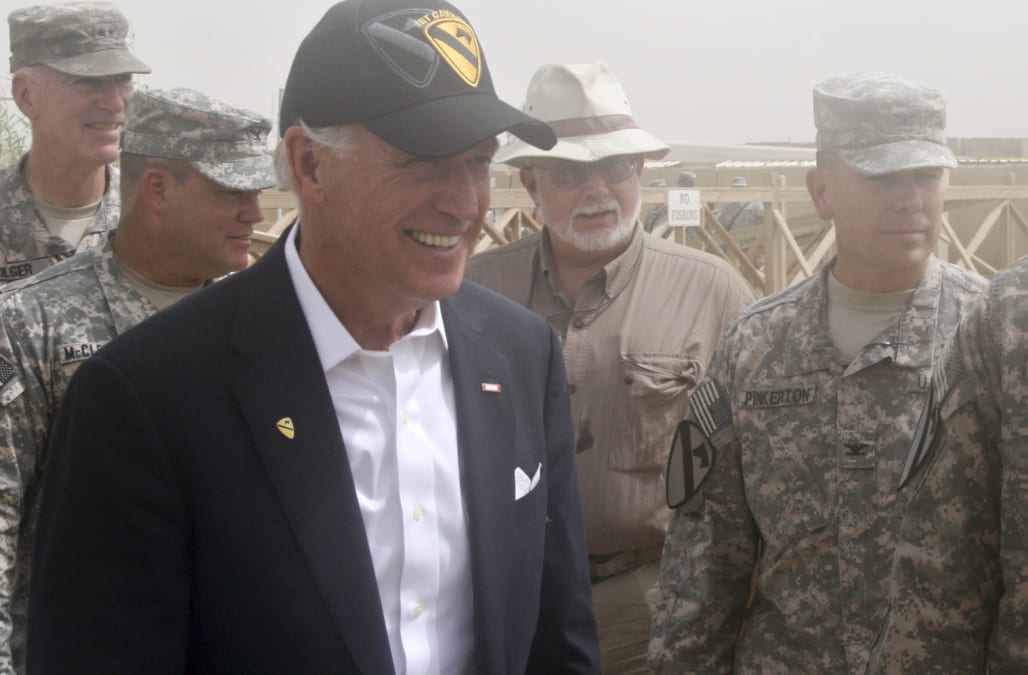 Former Vice President Joe Biden's vote in favor of the 2003 invasion of Iraq, which began 16 years ago today, could cause the long-rumored presidential candidate problems during the 2020 Democratic primaries.

Biden, a US senator for Delaware at the time, defended the conflict as not preemptive in nature and made the case for the war in speeches.

"I will vote for the Lieberman-Warner amendment to authorize the use of military force against Iraq," Biden said in October 2002. "I do not believe this is a rush to war. I believe it is a march to peace and security."

Read more: Human rights group accuses the US of killing at least 14 civilians in Trump's shadowy drone war in Somalia

In the speech Biden also invoked for Secretary of State Henry Kissinger, who has been heavily criticized by many on the political left:

"As the most powerful nation in the world, the United States has a special unilateral capacity and indeed obligation to lead in implementing its convictions. But it also has a special obligation to justify its actions by principles that transcend the assertions of preponderant power. It cannot be in either the American national interest or the world's interest to develop principles that grant every nation an unfettered right of preemption against its own definition of threats to its security."

"Dr. Kissinger is right," Biden added. "What message would declaring a policy of prevention send to the Indians and Pakistanis, the Chinese and the Taiwanese, the Israelis and the Arabs, the Russians and Georgians?"

The 2003 Iraq War was met with pushback from many parts of the international community, who said the US was launching a unilateral, preemptive invasion without the support of the UN. In 2004, then-UN secretary general Kofi Annan condemned the conflict as illegal.

In the run-up to the conflict, Biden argued that the invasion would not be preemptive.

Read more: America's year in war: All the places US armed forces took or gave fire in 2018

"If we go to war with our partners to disarm Saddam, it will be to enforce the UN resolutions, which I would argue in terms of international law are the equivalent of a peace agreement," Biden said in February 2003. "This is not — is not — preemption. There's nothing preemptive about it. If you turned on now and the television showed aircraft striking Baghdad, it would not be a preemptive attack. There is nothing preemptive about it. It's an enforcement."

More recently, Biden has been teasing a possible 2020 presidential run. If he declares, Biden will likely face questions on his long record in Washington, which could include scrutiny of his defense of the Iraq invasion.

Many of the liberal voters who will decide the Democratic primary are staunchly anti-war and anti-intervention, hence the growing popularity of candidates like Sen. Bernie Sanders — who voted against the invasion.

The issue already came up in 2016, when former Secretary of State Hillary Clinton faced significant criticism over the fact she voted for the Iraq invasion while a US senator for New York. Overall, 29 Democratic senators voted in favor of authorizing the use of military force in Iraq

Read more: Here are the biggest endorsements all the 2020 Democratic presidential candidates have received so far

Biden hasn't even announced yet, but has already seen his record on race relations dissected at a time when Democrats seem to crave diverse, progressive candidates. Biden's support for one of the most divisive conflicts in the modern era will likely be no exception to this trend of scrutiny. With that said, Biden has been at the top of recent polls, even though he hasn't officially joined the race.

The US justified the invasion of Iraq by citing what ultimately proved to be false intelligence that Hussein had weapons of mass destruction.

Biden in 2005 expressed regret about voting in favor of the invasion.

More from Business Insider:
Hillary Clinton says she's 'not running' for president in 2020 - but she's 'not going anywhere'
'You gotta clap for that': Howard Schultz asks the audience to applaud him during a policy speech without much substance
Trump applauds Kamala Harris' 2020 campaign launch, calls it the 'best opening so far'