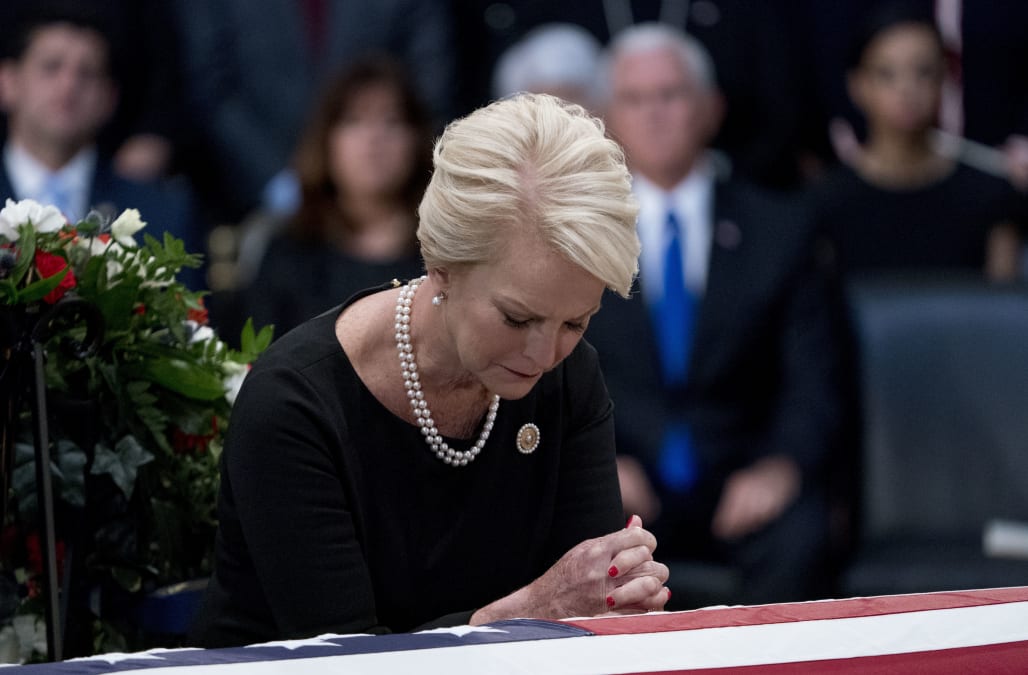 As President Trump continued to disparage her late husband, Cindy McCain shared a hate-filled message she received from a woman who said she was “glad” the former U.S. senator from Arizona was dead.

McCain took to Twitter to post a screenshot of a private message she received from someone who addressed her using a pejorative and lashed out at both her husband and their daughter.

"Your husband was a traitorous piece of warmongering sh— and I’m glad he’s dead," the woman wrote. "Hope your Miss Piggy looking daughter chokes to death on the next burger she stuffs down her fat neck too, c--,” the message read.

McCain said she shared the note because "I want to make sure all of you could see how kind and loving a stranger can be.” She allowed the sender's name to be visible in the screenshot.

I want to make sure all of you could see how kind and loving a stranger can be. I’m posting her note for her family and friends could see. pic.twitter.com/GoNCm0fv4U

“I'm posting her note for her family and friends could see," McCain wrote.

The profane message was the latest in a fray of social media insults that started over the weekend after Trump sent out a flurry of tweets, including several attacking John McCain, who died from brain cancer in August 2018.

Arizona Sen. John McCain's family announced on Friday, August 24, 2018 that he had discontinued medical treatment for an aggressive form of brain cancer.

**Click through the following slides to see how politicians and well-known figures are paying tribute to him.**

Trump first criticized the senator’s 2017 vote against repealing Obamacare, calling the move “disgraceful.” He also accused McCain of leaking information about him to the FBI.

The tweets prompted Meghan McCain to defend her father, first on Twitter and then on the show she co-hosts.

.@MeghanMcCain addresses Pres. Trump’s Saturday tweet criticizing her father Sen. John McCain: “He spends his weekend obsessing over great men because he knows it and I know it and all of you know it — he will never be a great man.”https://t.co/p6oiZYUr74pic.twitter.com/8HSpllAcEz

“He spends his weekend obsessing over great men because he knows it and I know it and all of you know it, he will never be a great man,” McCain said Monday on “The View.”

McCain was an open and vocal critic of Trump, who frequently responded to the criticism with insults. He famously mocked McCain for being a prisoner of war, dismissing his "war hero" status and declaring: "I like people that weren't captured."

On Tuesday, Trump defended his latest series of attacks against the late senator.

"I was never a fan of John McCain and I never will be,” he said during a White House event with Brazilian President Jair Bolsonaro.