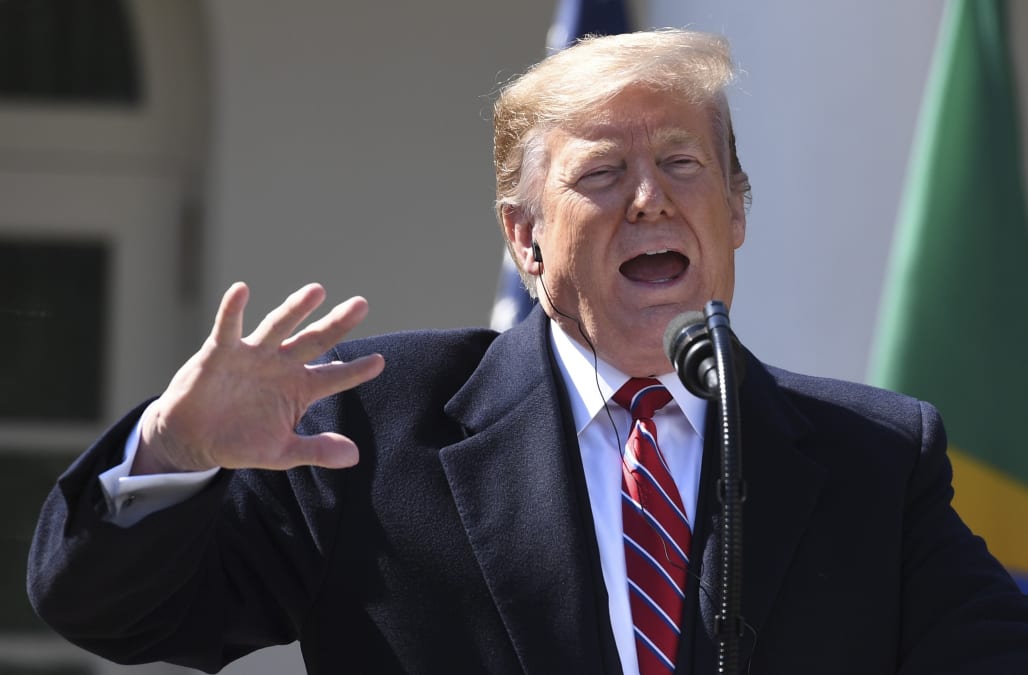 President Trump threatened an investigation into Facebook over perceived bias after a White House staffer was temporarily banned from posting comments on the site.

“Dear Facebook,” wrote Scavino, posting a screengrab of the blocking notice he received, “AMAZING. WHY ARE YOU STOPPING ME from replying to comments followers have left me - on my own Facebook Page!!?? People have the right to know. Why are you silencing me??? Please LMK! Thanks.”

Scavino’s account was temporarily blocked from posting comments (although not new original posts) because previous messages had been reported as spam.

Trump — or potentially Scavino, who has access to the president’s Twitter account — retweeted a story about the suspension, adding “I will be looking into this! #StopTheBias”

White House aide Dan Scavino listens and films as President Donald Trump speaks during an executive order signing ceremony regarding trade in the Oval Office of the White House in Washington, DC on Friday, March. 31, 2017.

Dan Scavino and Kellyanne Conway, aides to President Donald J. Trump, are seen on the West Front of the Capitol after Trump was sworn in as the 45th President of the United States, January 20, 2017.

Dan Scavino Jr., White House director of social media, right, speaks with Sean Spicer, White House press secretary, outside the Oval Office of the White House in Washington, D.C., U.S., on Wednesday, May 17, 2017. Republican leaders were still pitching their plans to overhaul the health-care system and tax code Wednesday, despite a steady stream of chaos from the White House.

A Facebook spokesperson told Yahoo News that a system intended to stop bots had temporarily halted Scavino’s ability to post comments, and that the company had apologized and restored his account.

“In order to stop automated bots, we cap the amount of identical, repetitive activity coming from one account in a short period of time, such as @mentioning people,” said the spokesperson in a statement. “These limits can have the unintended consequence of temporarily preventing real people like Dan Scavino from engaging in such activity, but lift in an hour or two, which is what happened in this case. We’ve been in touch with him and have apologized for the inconvenience.”

Trump had complained about Facebook and other tech companies earlier Tuesday morning, writing, “Facebook, Google and Twitter, not to mention the Corrupt Media, are sooo on the side of the Radical Left Democrats. But fear not, we will win anyway, just like we did before! #MAGA”

When asked about social media during a joint press conference with Brazilian President Jair Bolsonaro Tuesday afternoon, Trump stated that there is “collusion” among tech companies against conservatives and that “we have to do something.”

Rep. Devin Nunes, R-Calif., a Trump ally who was chair of the House Intelligence Committee until January, filed a $250 million lawsuit against Twitter on Monday over what he described as “abusive, hateful and defamatory” content, including from parody accounts under the names of “DevinNunesMom” and “DevinNunesCow.” The Cow account has gained over 100,000 followers since Nunes announced the lawsuit.

Trump said in November that his administration would look into Facebook, Google and Amazon for potential antitrust violations. Tech companies and their treatment of conservative content has been an important cause for the president’s son, Donald Trump Jr., who targeted Instagram, which is owned by Facebook, accusing it of “deboosting” conservative posts. In 2016, Gizmodo reported that Facebook had suppressed conservative news stories. Facebook’s reputation has declined precipitously over the last year amid a number of controversies, including data privacy.

However Facebook, which was a key element of Trump’s 2016 campaign, has not silenced pro-Trump messages. A study released last week found that the most popular publisher on Facebook over the last year was Fox News, a network that is closely associated with and extremely supportive of the White House. The sixth most popular site was Daily Wire, a conservative outlet.

The Trump 2020 campaign has been very visible on Facebook as well. Trump’s reelection campaign spent $3.5 million on the platform between Dec. 30, 2018, and March 10, far more than any of the Democratic contenders, and more on Google than any of its rivals during that period.