Ex-U.S. Attorney Bharara has some unsolicited advice for President Trump 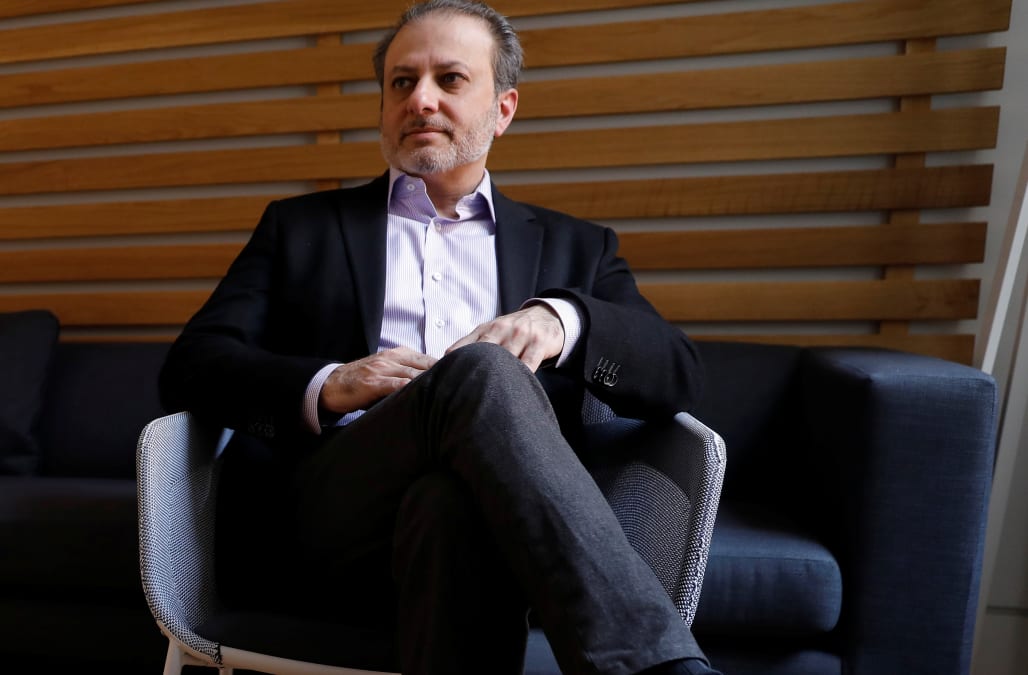 March 19 (Reuters) - Preet Bharara, the ex-U.S. Attorney in Manhattan, has a piece of unsolicited advice for President Donald Trump: don't meddle with investigations being pursued by his former office, especially one involving the Trump business or a family member.

Any such attempt, Bharara predicted, would likely prompt Democrats in Congress to start the impeachment process.

Bharara, who was fired as head of the office soon after Trump became president, wrote a book, "Doing Justice: A Prosecutor's Thoughts on Crime, Punishment and the Rule of Law," that goes on sale Tuesday.

A recurring theme in the book is the reputation of the Manhattan U.S. Attorney's office – formally known as the Southern District of New York – for political neutrality and independence.

The office's willingness to pursue high-profile cases was confirmed with its prosecution of Michael Cohen, Trump's former lawyer, who pleaded guilty in August to campaign finance crimes which prosecutors say he carried out at the direction of Trump.

The office's work is considered by many legal experts to be a bigger threat to Trump than Special Counsel Robert Mueller's probe of Russia's interference in the 2016 election, which is believed to be nearing its conclusion.

Reuters asked Bharara what would happen if Trump ordered the Southern District to halt a probe, a prospect that may not be far-fetched given that Trump last year asked then-acting Attorney General Matthew Whitaker if Geoffrey Berman, Bharara's Trump-appointed successor, could be tapped to oversee the Cohen investigation, according to the New York Times.

Berman is recused from the matter for undisclosed reasons.

Bharara said if he were still U.S. attorney and received such an order he would resign and buy "a one-way ticket for the shuttle to D.C." to testify before a congressional committee.

"And then, I think you set the timer on impeachment," he said. "So I don't think it would be a wise thing to do."

Trump has repeatedly criticized Mueller's probe as a "witch hunt" pushed by Democrats who want to impeach him. He has called Cohen a "rat," accusing him of lying to prosecutors to try and reduce his sentence of three years in prison due to start in May

Rudy Giuliani, a lawyer for Trump, did not respond to requests for comment.

Unlike the special counsel, the Southern District has wide latitude to pursue cases with some connection to New York. In addition to Cohen, it is looking at Trump's inaugural committee and the business practices at Trump's real estate firm.

Bharara's book is not about Trump but he acknowledges the president "infuses the book like he infuses everyone's life at the moment" even if he is not cited frequently by name.

The book instead centers on a variety of both high-profile and lesser known cases to illustrate his views on how the justice system should work and when it falls short.

He addressed a frequent criticism of his tenure - that his and other agencies failed to prosecute bankers for the financial crisis. He wrote that holding people accountable was difficult because "much of what happened in 2008 was not the product of a few people with clear, provable intent."

He pushed back at the notion that politics, bias or other considerations blunted his response to the crisis, noting that the Southern District prosecuted hedge fund executives and New York politicians from both major parties during his time there.

"I'm more than willing to accept credible criticism on behalf of the law enforcement community, but the idea that self-interest or politics or fear was a factor is a silly criticism, at least at SDNY," he wrote. (Reporting by Nathan Layne and Karen Freifeld in New York Editing by Alistair Bell)