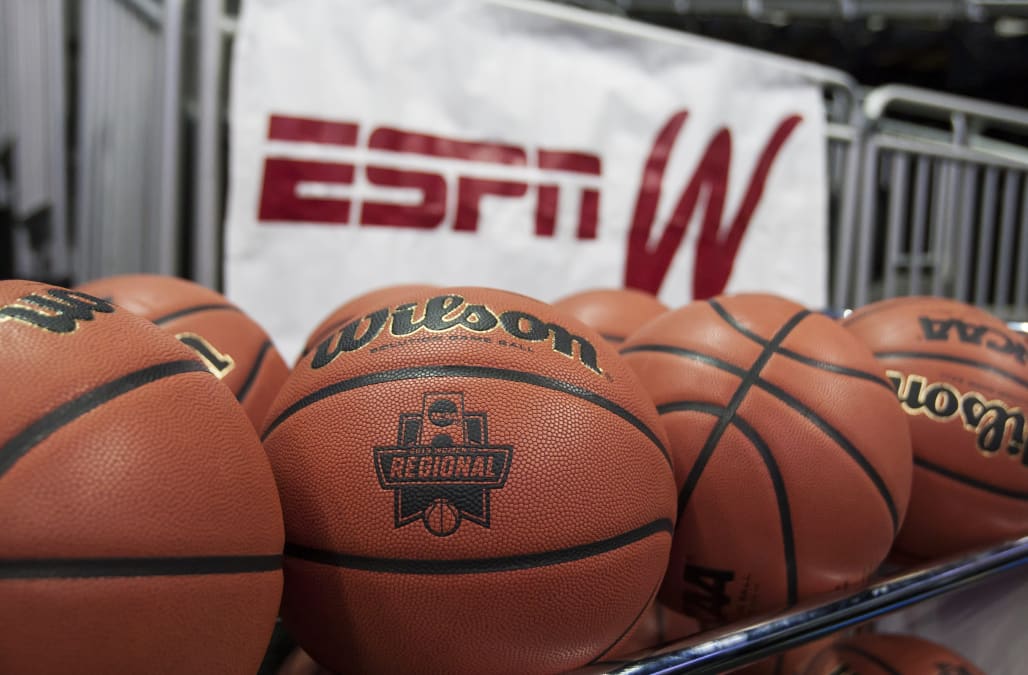 The 2019 women’s NCAA tournament bracket was supposed to be revealed at 7 p.m. ET Monday night on ESPN. But more than three hours before the start of the selection show, there was a leak. The culprit?

On an ESPNU re-airing of a Sunday night show breaking down the men’s bracket, the entire women’s field of 64 was listed in rotating eight-team chunks across the side of the screen:

Pictures of the bracket leak

In what can only be described as remarkable, the #NCAAW bracket was just on ESPNU by mistaken. I’ve managed to grab three sections of it if anyone else wants to help fill it out.

Spoiler: UCF & Tennessee are IN pic.twitter.com/xzpKpGpjdT

They cut off before bottom half showed but in the Albany region:

Had ESPNU on since I didn't see their bracket show last night. For a good 20 minutes they were revealing the entire women's tournament matchups on the bottom. Someone screwed up.

Video of the apparent ESPN gaffe shows sections of the bracket rotating on the side of the screen every 10 or so seconds. Soon enough, social media users had pieced together the full bracket by hand:

A little after 4:30 ET, ESPN and the NCAA all but acknowledged the leak by announcing that the bracket reveal would be moved up from 7 ET on ESPN to 5 ET on ESPN2:

Shortly before the start of the rescheduled selection show, ESPN released the following statement:

“In working with the NCAA to prepare for tonight’s Women’s Selection Special we received the bracket, similar to years past. In the midst of our preparation, the bracket was mistakenly posted on ESPNU. We deeply regret the error and extend our apology to the NCAA and the women’s basketball community. We will conduct a thorough review of our process to ensure it doesn’t happen in the future. We will now broadcast the full bracket at 5 p.m. ET on ESPN2, and the regularly-scheduled show on ESPN at 7 p.m.”

The NCAA followed up with a statement of its own:

The leak, and subsequent adjustments, ruined the entire evening for all involved, in so many ways. Viewing parties were likely cancelled. There will be no raw emotion and tension captured on camera, no live reaction shots of bubble teams finding out they’ve received a bid.

So @ESPNU is gonna leak the bracket and then proceed to ruin everyone’s selection show party by changing the time. 😂😂😂 Go ducks am I right 🐥

Some schools, like Fordham, did their best to maintain the suspense of Selection Monday:

We’re good at keeping secrets (unlike some people 🧐), so our players will be genuinely surprised at 7 PM!

FANS: come out to Rose Hill to join our party, starting at 6:00 💃🏽#PoundTheRockpic.twitter.com/vys8rd9WaR

But it clearly wasn’t the same.

Putting aside the logistics of the leak and focusing on the bracket itself, there were two major newsworthy items: Tennessee is in, and UConn isn’t a No. 1.

The Lady Vols were in danger of missing the NCAA tournament for the first time ... ever. They were one of several teams in contention for the final few at-large spots in the field. And they got one. UCF, Auburn and Indiana got the other three. Arkansas, Ohio and TCU were left out, and are NIT-bound.

Meanwhile, Louisville and Mississippi State nabbed top seeds ahead of UConn. It’s the first time since 2006 that the Huskies haven’t claimed a No. 1.

Here’s the full leaked bracket in text form – with the winners of the Greensboro region and Portland region meeting in the Final Four on the left side, and the winners from Chicago and Albany meeting on the right:

No. 8 Central Michigan vs. No. 9 Michigan State

The history of bracket leaks

In the past, men’s NCAA tournament brackets have leaked on the internet before their reveal on CBS, despite the NCAA going to great lengths to prevent exactly that from happening.

In 2010, a user on a Maryland fan message board had all the juicy bracket tidbits 45 minutes before CBS viewers did. In 2016, the entire bracket was all over Twitter midway through the (long) selection show.

But, of course, those are different. This is ESPN rendering the selection show, to which is has rights, irrelevant. What a colossal error.

So how did the leak happen?

There are two stages of bracket security: One before the precious field of 64/68 is handed off to the NCAA’s broadcast partner, and one after the exchange.

Here’s the first stage, from Jeff Eisenberg’s detailed feature on the subject in 2014:

The NCAA goes to great lengths to protect the integrity of its process and ensure CBS has the exclusivity it desires, sequestering selection committee members as though they were jurors in a high-profile trial.

Once they arrive in their rooms at the Conrad Hotel in Indianapolis on Wednesday afternoon, the 10 members of the selection committee don't leave the hotel's 18th floor until they've chosen the 68 teams who will make this year's NCAA tournament.

A security guard stands watch at the elevator all hours of the day and night to keep curious visitors away. All meals come via room service and are served in a hotel meeting room. Committee members are discouraged from using their cellphones and calls to their room phones are sent directly into a messaging system.

The only other people who have access to the 18th floor conference room where the selection committee assembles the bracket are a few hand-picked NCAA employees, a handful of hotel staffers and a CBS camera crew. Before the hotel staffers can restock the drinks and snacks or the CBS crew can come get footage, committee members shut off their monitors and turn the papers on their tables face down.

CBS typically receives the bracket from an NCAA staffer about 30 minutes before the selection show airs, but its staff is just as careful to minimize the chance of leaks once it arrives. The email with the bracket is password-protected and only a limited number of on-air and behind-the-scenes employees have access.

The process for the women’s NCAA tournament is clearly different. ESPN had the bracket at least four hours before the scheduled reveal. And somebody – perhaps multiple people – made a massive, massive mistake.