Here are the most likely March Madness upsets, according to Las Vegas 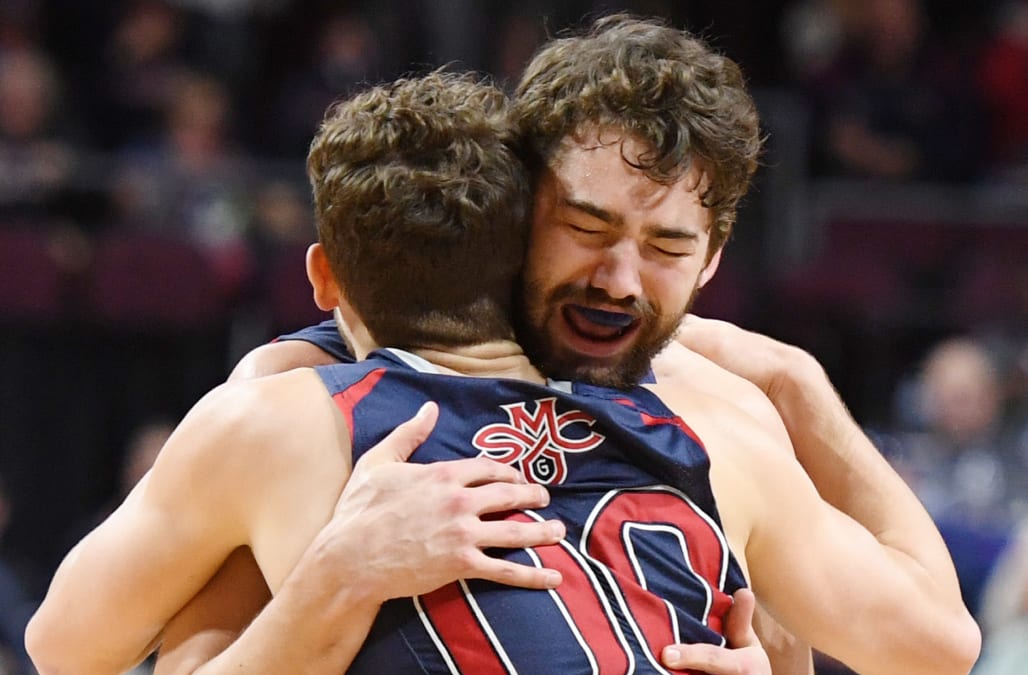 When it comes to March Madness, upsets are often the difference between winning your pool and finishing out of the money.

Upsets are often seen as bold choices, but if you know where to look, some of the picks are easier than you might think. Based on the odds in Las Vegas, many of the first-round matchups are mostly a coin flip, regardless of the two teams' seeds.

Below, we've collected the most likely upset picks for the first round of your NCAA Tournament bracket based on the odds from bookmakers. Chances are you don't need to add every one of these potential upsets to your bracket, but take a look and see which potential Cinderella catches your eye.

March Madness: The most likely first round upsets
No. 12 Oregon over No. 5 Wisconsin

One thing to know: Oregon is the 12-seed in this matchup, but are favored by the oddsmakers in Vegas to win the game outright. The Pac-12 champions enter the tournament as one of the hottest teams in the country, having won eight straight games to finish the year. If you're looking for a spry double-digit seed to advance to the Sweet 16, the Ducks are a fine choice.

(Photo by Ethan Miller/Getty Images)
No. 9 UCF over No. 8 VCU

One thing to know: Matchups between an 8-seed and a 9-seed are essentially a toss-up already, but it's nice to know that Las Vegas agrees, putting VCU as just 1-point favorites over UCF. Knights 7-foot-6 center Tacko Fall is an easy player to root for if you're looking to add a slight upset to your bracket.

(Photo by Joe Murphy/Getty Images)
No. 9 Oklahoma over No. 8 Ole Miss

One thing to know: Another matchup that looks close to a coin flip, the Oklahoma Sooners are just 2-point underdogs to Ole Miss, who have lost four of their past five games. The Sooners may be in better form to get the win on Friday.

(Photo by Scott Winters/Icon Sportswire via Getty Images)
No. 10 Florida over No. 7 Nevada

One thing to know: Nevada is a slight favorite as a 7-seed against Florida, and rightfully so — the Wolf Pack have lost just four times all season. But don't sleep on the Gators, who have two impressive wins over LSU this year and have been playing well leading into the tournament.

(Photo by Matthew Maxey/Icon Sportswire via Getty Images)
No. 9 Washington over No. 8 Utah State

One thing to know: Utah State won 17 of their final 18 games heading into the tournament, but are still just 2.5-point favorites over No. 9 Washington. Las Vegas has plenty of reason to respect the Huskies here — they had a 12-game winning streak at one point in the season and took home the Pac-12 regular season title.

(Photo by Ethan Miller/Getty Images)
No. 9 Baylor over No. 8 Syracuse

One thing to know: Syracuse is always an enigma when it comes to the tournament. Jim Boeheim's zone defense can confound the best teams in the nation on the right day, while other times the Orange will get blown out by a few hot shooters that refuse to miss. This year they're in another first-round coin flip against Baylor, who have lost four straight games heading into the tournament.

(AP Photo/Matthew Putney)
No. 10 Seton Hall over No. 7 Wofford

One thing to know: Wofford is on a 20-game win streak heading into the tournament, but are just 3-point favorites over No. 10 Seton Hall. Seton Hall's advantage comes from the competition they've already faced, with the Pirates sporting solid wins over Villanova, Kentucky, and Marquette this season. Las Vegas seems confident enough in their Big East pedigree to compete with a Wofford team that hasn't lost since December.

(AP Photo/Julio Cortez)
No. 12 Murray State over No. 5 Marquette

One thing to know: One of the most compelling matchups of the first round pits Marquette's Markus Howard against Murray State's Ja Morant. Murray State is just a 4.5-point underdog as the 12-seed, and are more than capable of winning outright if Morant is playing to his potential. Marquette had been one of the best teams in the nation all season, but has now lost five of their past six heading into the tournament.

One thing to know: Riding a 16-game winning streak into March Madness, the Big West champion UC-Irvine Anteaters have the potential to be one of the biggest spoilers of the opening weekend of March Madness. They are just 5-point underdogs against Kansas State despite their status as a 14-seed.

While it might seem like a bit too bold of a play, keep in mind that a 14-seed has stolen a first-round win in four of the past five NCAA tournaments.

(AP Photo/Alex Gallardo)
No. 11 Saint Mary's over No. 6 Villanova

One thing to know: The reigning national champions have had an up-and-down season, and now find themselves just 6-point favorites in their first-round game against Saint Mary's. The Gaels have already proven themselves as potential giant-killers, becoming one of just three teams to take down Gonzaga this season in the WCC title game.

One thing to know: One final 14-seed team that Las Vegas sees as a potential spoiler is Yale, who are just 7.5-point underdogs to LSU in the opening round. Don't let the Ivy League reputation fool you — Yale has been a strikingly efficient offense this season, scoring more than 80 points per game.


(Photo by Corey Perrine/Getty Images)
Up Next

21 players we can't wait to watch in the NCAA Tournament, ranked

6 tips for filling out your March Madness bracket

A beginner's guide to filling out a March Madness bracket