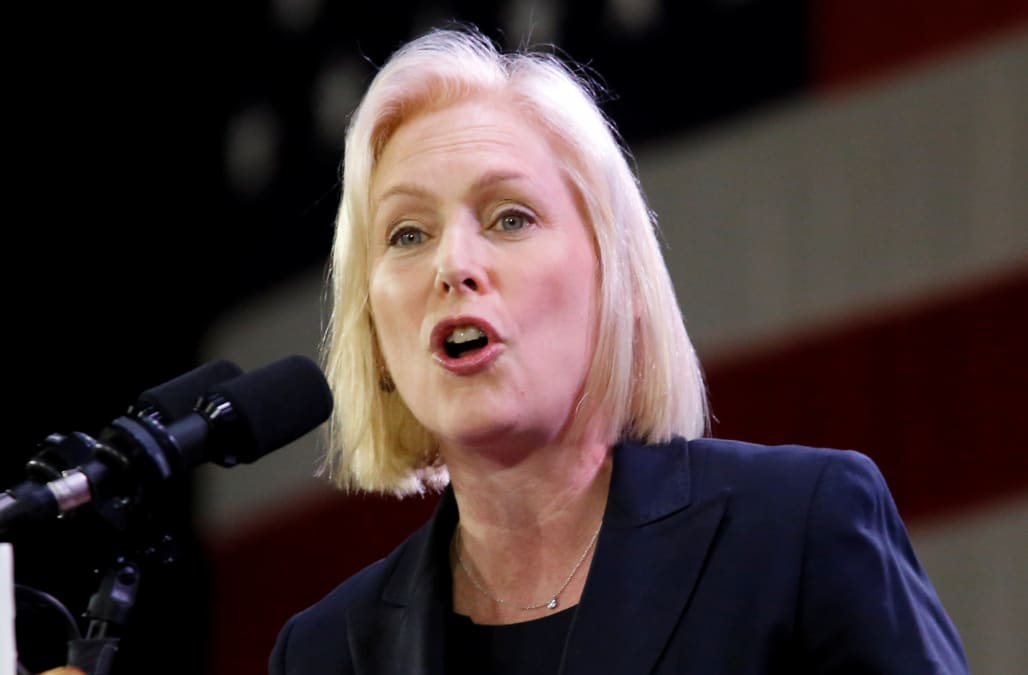 Sen. Kirsten Gillibrand (D-N.Y.) is officially a contender for the 2020 Democratic presidential nomination and will deliver her first major campaign speech this month outside the Trump International Hotel in New York City.

Gillibrand announced two months ago that she had formed an exploratory committee. On Sunday, she officially launched her run with a video posted online and plans for a one-week, multi-state tour culminating in the March 24 speech.

At one point, she recalls the first manned flight to the moon, by American astronauts.

“If we can do that, we can definitely achieve universal health care,” she says.

RELATED: Kirsten Gillibrand through the years

Gillibrand never mentions Trump by name, but speaks over footage of neo-Nazi demonstrators and the president with a crowd of his supporters. She has been a consistent Trump critic on Capitol Hill, calling for his resignation in 2017.

“Brave doesn’t spread hate. Cloud truth. Build a wall. That’s what fear does,” she says in the video.

Gillibrand will first travel to Michigan, appearing in a Monday evening town hall alongside Michigan Gov. Gretchen Whitmer (D) moderated by MSNBC’s Chris Hayes. Following trips to Iowa and Nevada, she plans to return to her home state later in the week, ending a whirlwind kickoff at the glitzy Trump landmark.

The senator has so far made several trips to meet voters in Iowa, New Hampshire, South Carolina, California and Texas.

Her “Brave Wins” campaign tagline references a lyric of the “Star-Spangled Banner” asking whether the American flag, symbol of “the home of the brave,” still stands.

“It asks, ‘Will brave win?’” Gillibrand says of the anthem, continuing, “Well, it hasn’t always. And it isn’t right now.”

Since she launched her exploratory bid, Gillibrand has pitched herself as someone who can get things done, emphasizing the bipartisan legislation she’s worked on in the Senate.

“I have a bipartisan bill with nearly every Republican member of the Senate,” she said on “The Late Show with Stephen Colbert” in January after announcing the formation of her exploratory committee.

At the time, she said she was “going to run for president of the United States because as a young mom I’m going to fight for other people’s kids as hard as I fight for my own.” She argued that the country needed a leader willing to take on “systems of power,” including “institutional racism,” “corruption and greed in Washington” and “special interests that write legislation in the dead of night.”

Gillibrand is one of 17 Democratic presidential hopefuls. Former Rep. Beto O’Rourke (Texas) jumped in this past week, shaking up the race, and former Vice President Joe Biden is expected to make a decision on a potential run in the coming weeks.

More from HuffPost US:
2020 Democratic convention to be held in Milwaukee
Former Colorado Gov. John Hickenlooper is running for president in 2020
Elizabeth Warren differs with Joe Biden: Mike Pence is no 'decent guy'