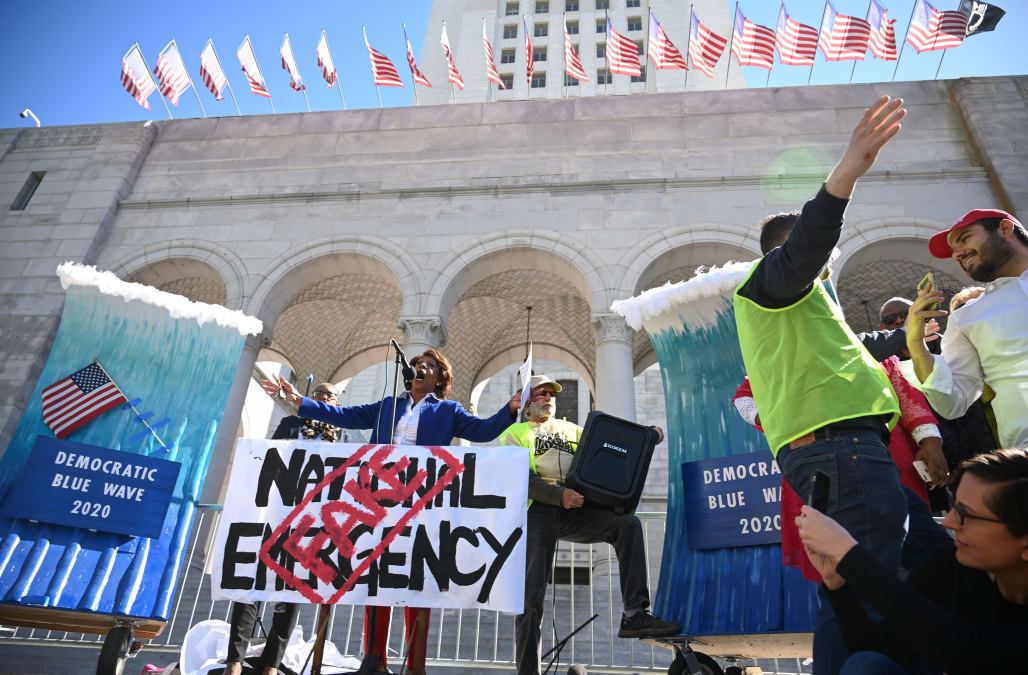 People took to the streets in cities across the country on Presidents Day to protest against President Donald Trump’s national emergency declaration to build his border wall.

On Monday, demonstrators marched in cities from Washington, D.C., and Philadelphia to Ann Arbor, Michigan, and Austin, Texas, carrying signs declaring “Trump is the emergency” and chanting things like “Love, not hate, makes America great.” Thousands of people joined more than 260 rallies across 48 states, according to nonprofit group MoveOn, which organized the protests.

“Trump has declared a #FakeNationalEmergency — an illegal power grab from an unhinged man to push his racist, dangerous policies,” MoveOn’s website read, adding that the protests were “against Trump’s fake crisis and racist deportation force and to stand with immigrant, Muslim, and Black and brown communities to stop Trump’s dangerous and illegal power grab.”

Trump declared a national emergency Friday, aiming to divert billions of dollars from the Defense Department and other earmarked government funds to construct a wall on the U.S.-Mexico border.

He announced his declaration a day after Congress passed a bill to avert another government shutdown; the legislation did not include more than $5 billion Trump wanted for a border wall.

In December his demands for wall funding led to a record-long partial government shutdown, which left hundreds of thousands of federal workers without pay for weeks.

On Monday, people braved the cold in states like New York, Maine and Ohio to carry signs calling for “No wall, offer asylum” and deeming the declaration a “Trumped up crisis.”

Great crowd for the protest of this fake national emergency. Honored to speak with my brothers and sisters to fight this fraud. pic.twitter.com/tB5D81fmge

Some Democratic lawmakers tweeted support of the demonstrations, including Sen. Elizabeth Warren (Mass.), who called the “fake” national emergency “fearmongering of the worst kind.”

Starting Friday, lawsuits began rolling in against Trump’s declaration, largely arguing that he cannot legally use the emergency declaration to evade funding limits imposed by Congress.

On Monday, California Attorney General Xavier Becerra said that about a dozen states were joining to file a lawsuit challenging the declaration. “We’re going to try to halt the President from violating the Constitution, the separation of powers, from stealing money from Americans and states that has been allocated by Congress, lawfully,” Becerra told CNN.

Check out images from the President’s Day protests nationwide against Trump’s declaration:

Max Socol of @jewishaction: “We will build this world with love because, more than anything else in this world, the love that comes from solidarity is stronger than authoritarianism.” #FakeNationalEmergencypic.twitter.com/spDsr30v4G

Happening now: Hundreds of Coloradans marching in freezing temps at the state Capitol to protest the #FakeNationalEmergency. @peoplepowerpic.twitter.com/Yre8mS1oLl

About 120 ppl marching through downtown Ann Arbor right now in protest of #FakeTrumpEmergencypic.twitter.com/HDsf6Ct8Bf

In #ButlerCountyOH joining thousands of our fellow citizens around the USA to protest the #FakeTrumpEmergency. @IndivisibleOH8pic.twitter.com/1KrTZx4hAC

#PresidentsDayProtest at the free speech wall in #Charlottesville VA! #FakeTrumpEmergencypic.twitter.com/mfNOJ9vu1b