Dog with two mouths finds forever home: 'She's one in a million' 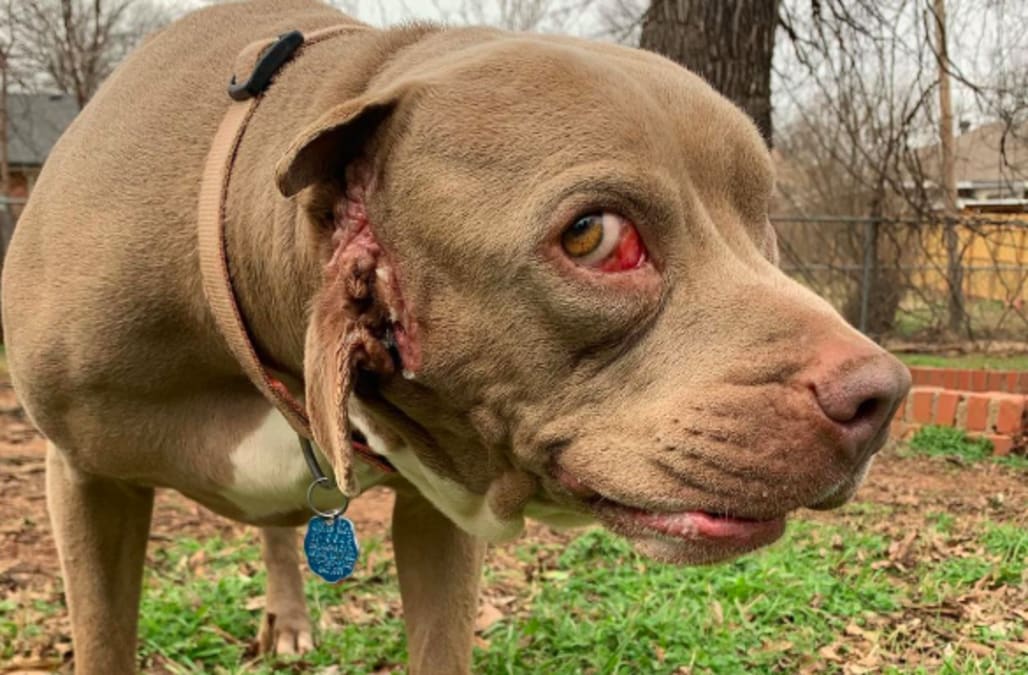 A very unique rescue dog with two mouths is smiling double after finding her forever home, thanks to the owner of an Oklahoma animal shelter.

Toad, a 5-year-old former-stray dog, has a second mouth growing on the side of her head where an ear should be. The pup's peculiar feature even has its own set of teeth and frequently salivates.

But despite Toad's two mouths, misaligned face, and limited hearing and vision, her new owner, Heather Hernandez, told KFOR that she fell in love with the "special" dog the moment she laid eyes on her.

"We realized immediately she was different," Hernandez the station. "Obviously, the way she looks but, her personality and her bond to me and my family, it was just so immediate."

Toad, the rescue dog with two mouths, finds her forever home
When mom catches you doing something naughty 😬😬😬 😂😂😂 How could I possibly be mad at this face?! 😻😻😻
It’s what’s on the inside that counts ❤️ Like TEETH! 😻
This sweet angel is VERY special and as far as we know, the only dog to ever be found with an ear mouth!
We are about to be on News 4 in OKC if you wanna watch ❤️
Happy Valentine’s Day ❤️ love, Toad and Grandpa 🥰
🙀🙀🙀🙀
I never show what Toads OTHER “ear” looks like so I thought I would share a video! She may not look like other dogs but to me she’s absolutely perfect ❤️
When people hear about Toads ear mouth 🤨
Day one, July of 2016. The day Toad became an official part of our family ❤️
The whole family ❤️
Toads long lost twin! Maybe it’s Sloths mouth she absorbed into her ear?! #allinjest #allingoodfun
The happiest girl 💕 Some people give us a hard time about spending so much time, energy, resources and emotions on special needs pets that may never have a completely normal life. And that’s ok! When asked why we focus on these guys, our answer...? Because it’s what we do! 🤷🏽‍♀️ We hope to show people that animals don’t have to be perfect to make a perfect pet ❤️ Please consider joining our fight to save special needs pets by getting involved at muttmisfits.com @muttmisfits
Toad did an interview with News 4 today and she was a very good girl!
Just a slow-mo video of Toad being beautiful! 😻
Up Next

Hernandez, the owner of Mutt Misfit Rescue in Oklahoma City, said she was "completely shocked" when her soon-to-be adopted pet was first brought into the shelter, comparing her curious abnormality to "something from a science fiction movie." In fact, true to the genre, much about Toad's second mouth remains a complete mystery.

"Her primary veterinarian thinks that maybe she absorbed a twin in utero and so that's kind of how the deformity surfaced," Hernandez said. "The main teeth, the ones you see primarily, they are connected to her skull, so we leave them."

"(The second mouth) is attached to her esophagus and airways," she added. "So, when she drinks a lot of water, when she runs a lot, she gets tired or excited, then it drools a lot."

Hernandez said that despite the fact that she cannot "rule out that the ear mouth might cause further issues in the future," Toad is living a fairly normal life for the time being. She hopes her story will encourage others to be more open to adopting deformed and disabled dogs.

"Just because an animal doesn't look perfect, it can still make a perfect pet and a perfect part of the family," Hernandez said.