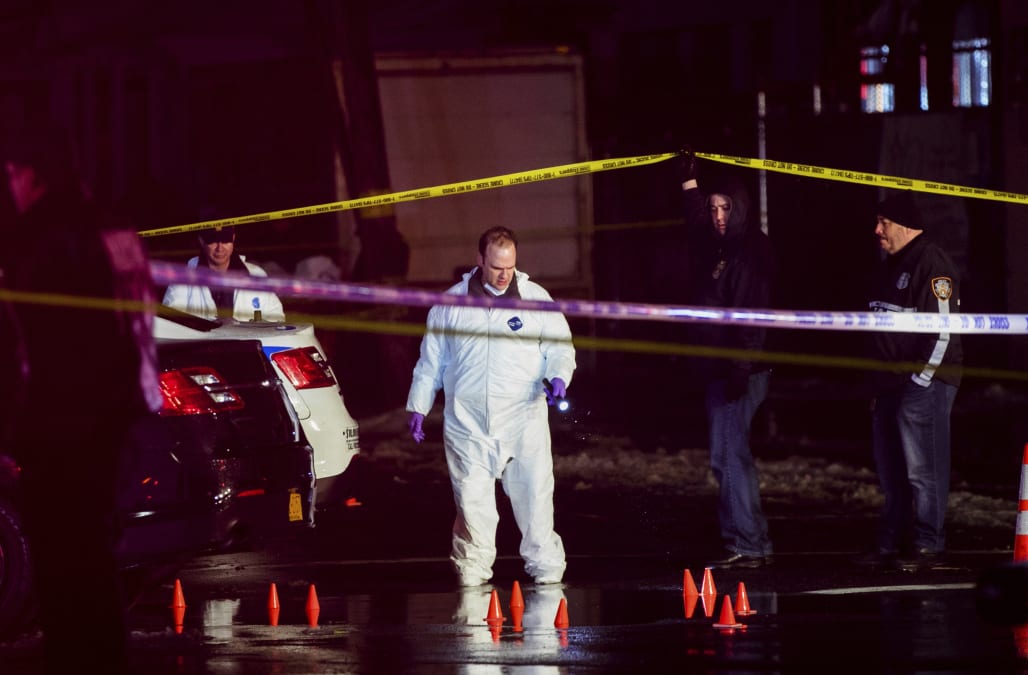 NEW YORK (AP) -- A New York City police detective was shot and killed by friendly fire Tuesday night as officers confronted a robbery suspect who turned out to be armed with a replica handgun, Commissioner James O'Neill said.

"This appears to be an absolutely tragic case of friendly fire," an emotional O'Neill said at a late-night news conference.

Det. Brian Simonsen, 42, was struck in the chest as multiple officers fired on the suspect at a T-Mobile store in Queens, O'Neill said. Simonsen, a 19-year NYPD veteran, was put in a squad car and taken to a hospital, where he was pronounced dead.

Sgt. Matthew Gorman was shot in the leg, O'Neil said. A passerby stopped and drove him to the hospital in his car. Gorman is in stable condition.

The suspect, a 27-year-old man with an extensive criminal record, was armed with an imitation firearm, O'Neill said. He was wounded and is hospitalized in stable condition.

Suspect was dressed in all black and carrying a duffel bag

"Make no mistake about it, friendly fire aside, it is because of the actions of the suspect that Det. Simonsen is dead," O'Neill said.

Police swarmed to the store around 6:10 p.m. after a 911 caller standing outside reported seeing the suspect — dressed in all black and carrying a duffel bag — take two employees to a back room at gunpoint, according to dramatic dispatch audio.

"No sirens, guys," a dispatcher warns.

Simonsen and Gorman were working on another case nearby when the call came over and arrived around the same time as patrol officers, O'Neill said. At first, the front of the store appeared empty, he said.

Then a man matching the suspect's description emerged from the rear of the store pointing at them what appeared to be handgun and police started shooting, he said.

"Shots fired! Shots fired!" an officer is heard yelling on the dispatch audio over a barrage of gunshots.

About a minute later, Gorman tells dispatchers that he's been hit and an officer screams for dispatchers to rush an ambulance to the scene.

Arwindern Singh, who lives across the street from the store, said he heard about 20 shots go off and thought they were firecrackers.

When he went outside, he said "all of a sudden there were cops all over."

The gunfire blew out the store's doors, showering the sidewalk with glass. Bullet holes pocked frosted windows decorated with the T-Mobile logo. Scores of police officers streamed to the scene, which was roped off with crime tape. Some walked together in a line, searching for evidence.

At Jamaica Hospital, officers guarded the emergency room entrance as O'Neill and Mayor Bill de Blasio met with Gorman and offered their condolences to Simonsen's wife and mother.

"It was heartbreaking, absolutely heartbreaking," De Blasio said. "His mom, who has suffered so much. His wife. The shock that they're feeling was so painful to see."

Simonsen should've been off Tuesday for a union meeting, but he opted to go to work so he could continue tracking a string of recent robberies, Detectives' Endowment Association president Michael Palladino said.

Given the suspect's criminal history, Palladino said: "I think we have to ask the question: Why was someone with such an extensive arrest record out on the street and not incarcerated?"

In 2009, Simonsen investigated the death of an 11-month old boy who drowned in a bucket of water at an unlicensed daycare while the woman running it was passed out on NyQuil. Simonsen testified at Kristal Khan's trial, which ended in her conviction, that she "didn't show any emotion" when he questioned her two hours after the incident.

The last New York City police officer killed in the line of duty was a 12-year veteran and mother of three who was gunned down in 2017 while sitting in a police vehicle.

Officer Miosotis Familia, 48, was writing in her notebook when ex-convict Alexander Bonds strode up and shot her through a window. Bonds, who had railed about police and prison officers in a Facebook video months earlier, was fatally shot by officers soon after the attack.

In December, a police officer on Staten Island survived being hit by friendly fire as officers responding to a domestic dispute call shot and killed a man carrying a knife.

De Blasio on Tuesday night praised officers for rushing into dangerous situations and taking decisive action when lives are threatened.

"They know it's a moment where they cannot hesitate, where even a moment of hesitation can mean a life is lost," De Blasio said. "That bravery and that resolve is something that we all need to understand."