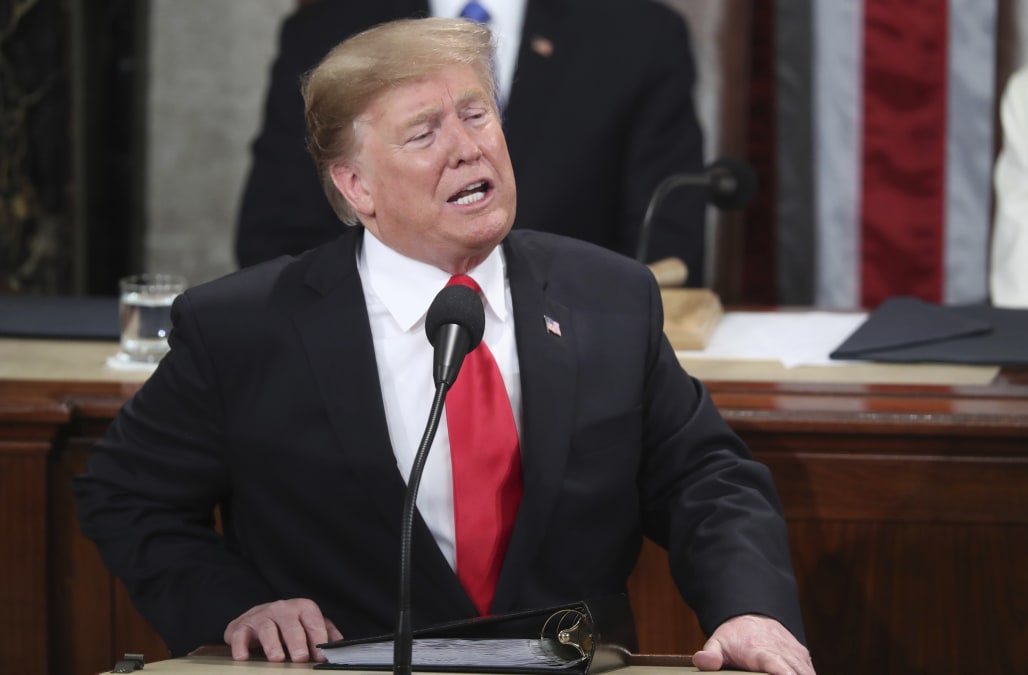 Trump raised eyebrows in his State of the Union speech Tuesday when he said he wanted people "to come into our country in the largest numbers ever, but they have to come in legally." His policy positions to date do not reflect that wish.

Asked Wednesday during a meeting with regional reporters whether the line represented a change in policy, Trump said it did.

That's according to a transcript tweeted by a reporter from The Advocate newspaper in which Trump is quoted saying: "I need more people coming in because we need people to run the factories and plants and companies that are moving back in."

In his speech Tuesday, Trump had argued that immigrants in the U.S. illegally take jobs away from middle-class Americans. However, much of the recent economic research suggests that immigration has no significant effect on job growth for U.S.-born workers in the long-run.

Stars and more react to Trump's State of the Union speech
I stand with trans Americans. I oppose @realdonaldtrump and any regime who would attack their rights and their very… https://t.co/IPKF9laAKO
#SOTU DRINKING GAME: every time they cut to a democrat rolling their eyes take a.....my liver just exploded
How’d he get from childhood cancer to school choice? What a leap! Now Ivanka gets her shoutout...now we’re on to… https://t.co/UBiOVl6PAZ
“We must stop these coyotes — with their rocket skates and giant slingshots, terrorizing innocent roadrunners.” #sotu
I will literally pay for a 1-week all-inclusive Caribbean vacation 4 the #SOTU teleprompter guy if he turns the who… https://t.co/mJueSN0ldx
Is it still going on? I am now watching "Botched" which seems appropriate #SOTU
Politicians 👏 should 👏 not 👏 tell 👏 women 👏 what 👏 to 👏 do 👏 with 👏 their 👏 bodies. #SOTU
It takes more than a nod to unity at the top of a speech to bring our country together. Our president has spent the… https://t.co/IwMqXO1c2o
So proud!!! @AliceMarieFree at the SOTU!!!! https://t.co/Sjf9qFOMU6
Even his tie is crooked. Sure it has a Mueller subpoena coming. #SOTU https://t.co/GBIvnrlzEg
Nancy Pelosi is 100% reading a Jodi Picoult novel back there #SOTU https://t.co/hYRznEhNzN
How much you wanna bet that when Trump said “Thank you Buzz,” he thought he was talking to Buzz Lightyear? #SOTU
Moving moment of extended applause for SWAT officer in Pittsburg and member of the Tree of Life Synagogue. And Happ… https://t.co/4aqFxJqdf4
Trump suggests we “reject the politics of revenge.” He’s gonna get called out on that one. #SOTU
When does Maroon 5 come on? #StateOfTheUnion
‘Someone In This Room Tonight Will Be Murdered By An Illegal Immigrant,’ Announces Trump Just Before Lights Go Out… https://t.co/8dJMA54FfD
Let’s be clear: Trump’s tax cuts to massive corporations showered profits onto their shareholders, leaving most mid… https://t.co/l6BWZY9xHW
fact checkers watching the #SOTU like https://t.co/iKOVXaZyFH
Remember: it's not about what Trump says, you can't trust a damn thing he says. #SOTU
Donald Trump is pimping Alice Johnson’s blackness to cloak his anti-blackness. I feel for her. She is being used. #sotu
“If we want peace and legislations we can’t have wars and investigations.” HE SAID THIS. 🤣 #SOTU
Did the President of the United States seriously just threaten the US economy if Mueller doesn't stop investigating him? #SOTU -ct
This moron just said we can’t have peace if there are investigations into his corrupt administration. #SOTU
Word? Republicans spent years and millions on Clinton, Benghazi and Whitewater investigations. #SOTU
Protecting the Mueller investigation is a bipartisan issue. We will protect the investigation so truth can come to light. #sotu
Donald Trump just had to look up towards Nancy Pelosi, a powerful woman perched just above him, to shake her hand,… https://t.co/IUBAfMP9O1
If you are a pundit and you watch Trump read a TelePrompter tonight and say something like, “This is a NEW Trump,”… https://t.co/SPnR4tvgQF
I know she's following along with the written version of the speech, but it's fun to think she's reviewing impeachm… https://t.co/veUxehfbWo
Trump really does have a talent for contradictions -- speaking powerfully about the suffering of Jews during the Ho… https://t.co/aRDcTouc0x
WHY IS HE STiLL TALKING !!!!???? #SOTU
CLAIM: El Paso turned from one of the most dangerous to “one of our safest cities” after a border barrier was built… https://t.co/Pd2nikesSO
A look at the crowd when Trump said he wants us to protect the innocent and end late-term abortion. #WOW #SOTU GOP… https://t.co/640HwpX4OP
Up Next

Trump has proposed several policies that would severely restrict legal immigration, including limiting immigrants' ability to sponsor family members to join them. He has also slashed for the last two years the number of refugees the U.S. will accept.

The White House did not immediately respond to questions about how it might be translating Trump's new thinking into its policy stances and proposals.

More from Aol.com:
Partisan viewers drive approval of State of the Union
'Probably the worst': Not everyone on the right loved Trump's SOTU
'Pathetic and telling': Meghan McCain responds after Trump reportedly taunted John McCain after his death