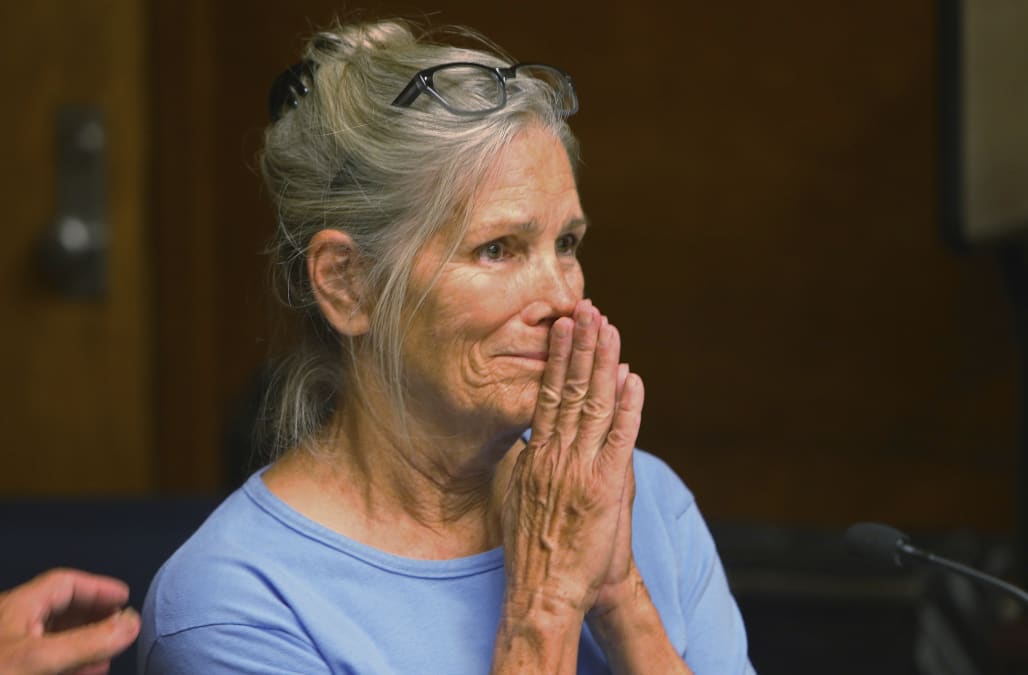 LOS ANGELES, Jan 30 (Reuters) - The California Board of Parole Hearings recommended on Wednesday that Leslie Van Houten, the youngest of Charles Manson's murderous "family" of followers, be released early from the life prison term she is serving for her role in the cult's 1969 killing spree.

The ultimate decision on whether to grant parole to Van Houten, who was 19 at the time of the slayings and is now 69, rests with Governor Gavin Newsom, whose predecessor and fellow Democrat, Jerry Brown, twice denied the board's recommendation that she be set free.

Manson, who died in prison in 2017 at age 83, directed his mostly young, mostly female devotees to murder seven people in August 1969 in what prosecutors said was part of a plan to incite a race war between whites and blacks.

Wednesday's decision by the parole board capped the latest of 22 attempts by Van Houten to persuade the panel that she be deemed suitable for release. She is currently being held at the California Institute for Women in Corona, California.

Bruce Davis is pictured in this undated handout photo courtesy of the California Department of Corrections and Rehabilitation. California Governor Jerry Brown denied parole on March 1, 2013, for a member of the Manson Family cult who was sentenced to life in prison for two murders in the 1970s, saying that he remained a danger to the public. In rejecting parole for Davis, who is now 70, Brown reversed the decision of a state parole board that had found him eligible for release after his 27th parole hearing last October.

Charles Manson is escorted to court for preliminary hearing on December 3, 1969 in Los Angeles, California.

Here's Charles Manson and his 26-year old girlfriend, who he just got a license to marry: http://t.co/tmLhvgqnlO http://t.co/NU9UuBNz2a

In this handout photo from the California Department of Corrections and Rehabilitation, Charles Manson, 74, poses for a photo on March 18, 2009 at Corcoran State Prison, California. Manson is serving a life sentence for conspiring to murder seven people during the 'Manson family' killings in 1969. The picture was taken as a regular update of the prison's files.

(California Department of Corrections and Rehabilitation via Getty Images)

The three female defendants in the Tate/LaBianca murder trial leave the Los Angeles courtroom after being convicted of first degree murder, 25th January 1971. From left to right, Patricia Krenwinkel, Susan Atkins and Leslie Van Houten were found guilty of the murders of actress Sharon Tate and six other people, in collaboration with Charles Manson. (Photo by Bride Lane Library/Popperfoto/Getty Images)

Charles Manson who led a cult that committed murders in Los Angeles in the sixties is clean shaven in closeup photo.

The three female members of Charles Manson's 'family' ham it up for photographers through the window of the sheriff's van as they arrive at the courthouse to continue the murder trial in the Tate-LaBianca case. Patricia Krenwinkle (left) makes a face as Leslie Van Houten and Susan Atkins (right) smile. August 5, 1970.

Charles Manson clowns around as he is led to his cell upon the conclusion of his exclusive interview with Reuters August 25, 1989.

Steve Grogan (left) and Bruce Davis (right), defendants in the murder of movie stunt man, Donald (Shorty) Shea are taken into court December 23. Davis, along with Charles Manson (not present) was accused of both the Gary Hinman and Shea murders, while Grogan was a defendant in the Shea case only. Grogan was later paroled, the only member of the 'Manson Family' to be paroled from a murder conviction.

Pittsburg Coroner Dr. Cyril Wecht, MD, JD. is seen in this photo taken January 22, 1998. Dr. Wecht is a nationally-known forensic pathologist who is often consulted on high-profile murder cases such as the John F. Kennedy assassination, O.J. Simpson case, Jon Benet Ramsey and the Helter Skelter murders of Charles Manson. The first non-governmental forensic pathologist to be granted access to autopsy materials in the 1963 Kennedy assassination, he said there was not enough information to challenge the Warren Commission's conclusion that a lone gunman killed the president and that investigators failed to find all those responsible for the killing.

Leslie Louis Van Houghten, (yellow dress), is taken by policewomen to a jail cell in the Hall of Justice, after she and two other girls waive arraignment on murder charges in connection with the Tate-LaBianca slayings. The three allegedly were members of a hippie cult led by Charles Manson.

Leslie Van Houten listens during her parole hearing in Corona, California, June 28, 2002. Los Angeles' top prosecutor on June 28, 2016, urged California Governor Jerry Brown to keep former Charles Manson follower Van Houten behind bars, despite the recommendation of a parole board that she be released.

Charles Manson prior to his appearance in Dept. 106 on March 6, 1970 in Los Angeles, California.

One of many historic photos that is part of L.A.'s longest mural, depicting 150 years of history in the Los Angeles County District Attorney's Office, at the Clara Shortridge Foltz Criminal Justice Building a.k.a. the Criminal Courts Building, Wednesday afternoon in downtown L.A. The mural covers 2,300 square feet, 18 walls, two floors and has 625 images. This is a photo of Charles Manson as he's escorted back to his cell after his arraignment.

A trio of suspects in the Sharon Tate murder case sing as they march to court for a hearing. Left to right: Susan Atkins, Patricia Krenwinkel and Leslie Van Houten march abreast along a corridor toward the courtroom where Judge William Keene set April 20th as the date for their trial with fellow suspect, Charles Manson.

Charles 'Tex' Watson. Watson was convicted of murder for his part in the killings of Sharon Tate and others while a member of the 'Manson Family'

Three days before he ran away from Boy's Town, Charles Manson poses in a suit and tie.

(Original Caption) Bruce Davis, the Manson Family 'X' carved in his forehead, walks with his attorney Daye Shinn (right) after he surrendered himself to authorities outside the Hall of Justice. Davis is under indictment by the Grand Jury for the 1969 murder of Gary Hinman.

A TV picture of American musician, cult leader and murderer Charles Manson, September 1975. The image was broadcast around the time that Manson acolyte Lynette 'Squeaky' Fromme was arrested after an attempt to kill US President Gerald Ford.

Charles Manson as an adolescent. He would later become infamous for attempted to foment social chaos by murdering prominent celebrities.

(Photo by Mirrorpix/Mirrorpix via Getty Images)

(Photo by WATFORD/Mirrorpix/Mirrorpix via Getty Images)

Charles Manson sits in the courtroom during his murder trial in 1970 in Los Angeles, California.

American actress Sharon Tate, on her wedding day to film director Roman Polanski. She was murdered by Charles Manson in California, 1969.

Charles Manson, accused leader of a hippie cult charged with the Tate-LaBianca murders, is heavily guarded as he leaves the Hall of Justice following arraignment December 11th. He is shown being taken to a police van for removal to a jail cell and peering through the barred windows of the police van. Bearded, short of stature, he is wearing a fringed buckskin outfit.

Polish film director Roman Polanski with his wife actress Sharon Tate in London. Sharon Tate was murdered in 1969 by Charles Manson and his followers.

Charles Manson, convicted hippie leader, is sullen as he is led back into the courtroom to hear the penalty he and this three female followers must pay for the Tate-LaBianca murders of August 1969. Manson and his followers, Denise Atkins, Patricia Krenwinkel, and Leslie Van Houten were decreed the gas chamber by the jury following a nine month trial.

Susan Atkins testified before the Los Angeles Grand Jury in December 1969, which indicted five individuals, including Atkins, and Charles Manson for the Tate-LaBianca killings.

In a statement, the parole board said its latest ruling begins a 150-day review process during which the agency's staff will "review all the facts and matters of law related to the decision."

"If the grant withstands scrutiny, it will then be sent to the governor's desk," the board said.