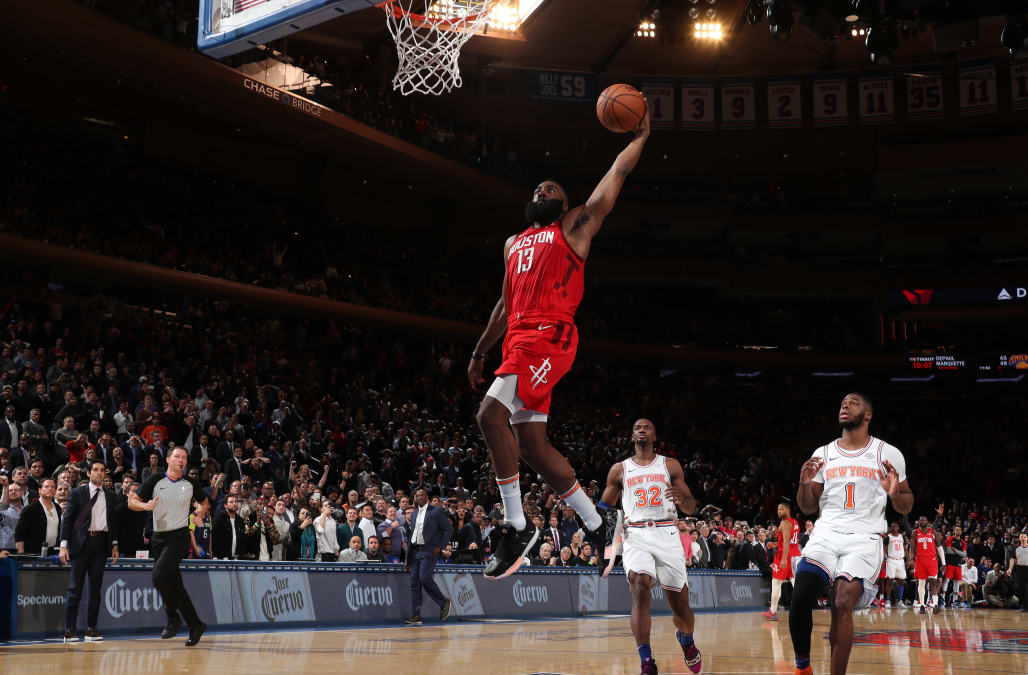 Stop us if you’ve heard this before.

But James Harden had another huge scoring night. And this time he flirted with a Madison Square Garden scoring record in the building where so many of the game’s greats have shined brightly.

The Houston Rockets guard scored 61 points on Wednesday in a 114-110 win over the New York Knicks.

Harden had 49 points through three quarters and appeared ready to threaten Carmelo Anthony’s arena record of 62 points. But his 12-point fourth quarter in a back-and-forth game ensured that Anthony’s record would stand.

It’s still another remarkable night for Harden despite the now commonplace sight of him scoring in the 40s and 50s.

“These are some of the best fans in the world,” Harden said in his postgame interview regarding playing in New York. “Every time you come to the Garden, you’ve got to put on a show. They expect it. And that’s what I gave them.”

While he didn’t get the arena record, Harden crossed off multiple remarkable milestones with the performance. His 61 points marked a career-high in addition to being a Rockets franchise record. He also tied Kobe Bryant for the most points by a visitor at Madison Square Garden.

He got to 61 with a game-sealing steal and fast break dunk in the game’s final seconds that extended Houston’s lead to four points.

With 61 PTS, The Beard ties Kobe Bryant for the most points scored at the current MSG by an opponent. #Rocketspic.twitter.com/sx21CVlraL

Harden got a late assist from Knicks coach David Fizdale, who picked up a technical foul for arguing with an official and was ejected with 1:08 remaining and the Rockets leading 105-101. Harden hit the technical free throw.

The Rockets appeared to have the game in control, but a bizarre mistake by P.J. Tucker on an inbound play allowed the Knicks back into the game. Tucker neglected to corral a pass from Eric Gordon and watched it bounce in front of him before Noah Vonleh grabbed it and scored a layup to bring the Knicks within 107-106.

The Knicks went on to take a 110-109 lead, but a Gordon 3-pointer and Harden’s late dunk were the final baskets of the game, sealing the Houston victory.

The night also marks the 21st straight game that Harden has scored 30 or more points, breaking a tie with Wilt Chamberlain for the fourth-longest such streak in NBA history. Chamberlain owns the top three streaks with the longest being 65, so Harden still has a long way to go to approach that lofty territory.

The Athletic noted that all of Harden’s 261 points over his last five games have come unassisted.

Regardless of debate over the aesthetics of Harden’s game, he keeps putting up these big nights and continues to carry the short-handed Rockets to wins despite the team missing key players like Chris Paul and Clint Capela. Houston is 16-5 during Harden’s streak of 30-point games and has climbed to fifth place in the Western Conference at 27-20 after an 11-15 start to the season.