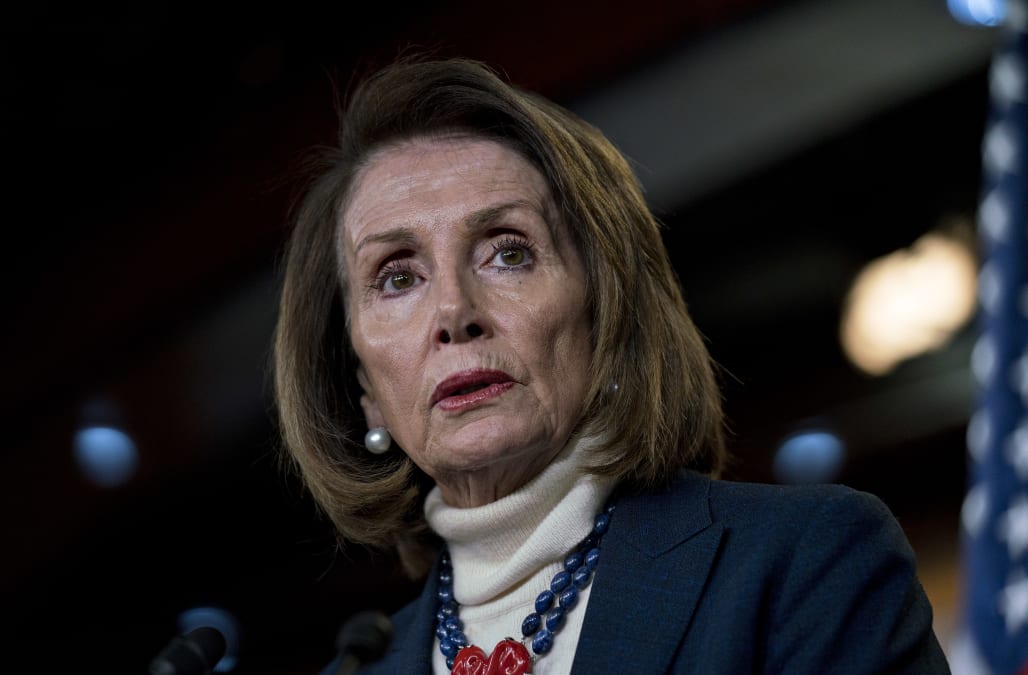 WASHINGTON — President Donald Trump and the White House's revelation that Speaker Nancy Pelosi planned to travel to Afghanistan with other House members put the group in danger and forced them to scrap the trip entirely, Pelosi said Friday.

"We had the prerogative to travel commercially, and we made plans to do that until the administration then leaked that we were traveling commercially,” the California Democrat told reporters on Capitol Hill. "We weren’t going to go because we had a report from Afghanistan that the president outing our trip had made the scene on the ground much more dangerous, because it’s just a signal to the bad actors that we were coming."

"You never give advance notice of going into a battle area — you just never do,” she continued. “Perhaps the president’s inexperience didn’t have him understand that protocol. The people around him, though, should have known that, because that’s very dangerous.”

After Trump decided to block Pelosi and other lawmakers from using a military jet for their official trip Thursday to visit troops overseas, the delegation was prepared to fly commercially, Pelosi spokesman Drew Hammill first said in a statement Friday morning.

The State Department’s Diplomatic Security Service provided an updated threat assessment overnight "detailing that the President announcing this sensitive travel had significantly increased the danger to the delegation and to the troops, security, and other officials supporting the trip," Hammill said.

"This morning, we learned that the Administration had leaked the commercial travel plans as well," Hammill said, without including further details. "In light of the grave threats caused by the President’s action, the delegation has decided to postpone the trip so as not to further endanger our troops and security personnel, or the other travelers on the flights."

He later tweeted that "multiple" administration sources "were telling Hill reporters early this morning that the Speaker Pelosi delegation was flying commercially."

A White House official flatly denied the charge. "When the Speaker of the House and about 20 others from Capitol Hill decide to book their own commercial flights to Afghanistan, the world is going to find out," the official responded Friday.

On Thursday, Trump halted the delegation’s trip as lawmakers were preparing to leave for Joint Base Andrews, arguing that lawmakers should be in Washington ready to negotiate an end to the federal government shutdown that has continued since Dec. 22. The letter came a day after Pelosi told the president that he should delay his Jan. 29 State of the Union address or submit it in writing.

"Due to the Shutdown, I am sorry to inform you that your trip to Brussels, Egypt and Afghanistan has been postponed," Trump wrote. "In light of the 800,000 great American workers not receiving pay, I am sure you would agree that postponing this public relations event is totally appropriate."

Trump said that the delegation was welcome to fly commercially instead.

The delegation was supposed to stop in Brussels to allow the pilot to rest, Hammill said in response Thursday, but did not include a stop in Egypt.

Meanwhile, first lady Melania Trump flew to Florida on Thursday on a government plane for a weekend vacation, according to a law enforcement source. The first lady, who often travels alone on a C32 for both personal and professional trips, is expected to be in West Palm Beach for the holiday weekend at the Trumps’ private Mar-a-Lago resort.