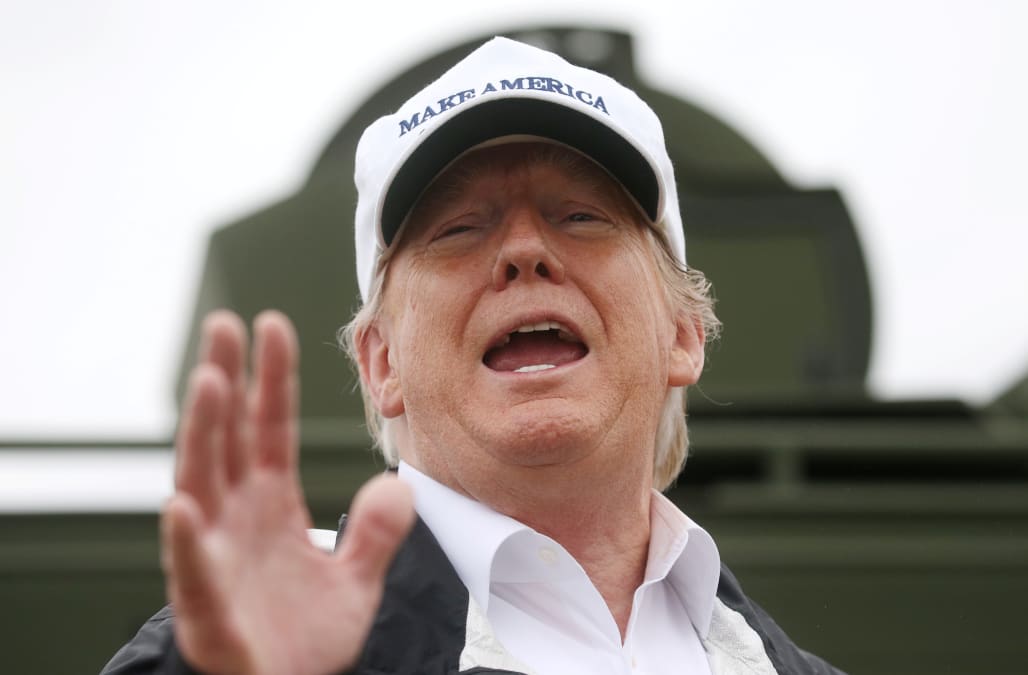 President Donald Trump unleashed a vitriolic attack against Sen. Elizabeth Warren (D-Mass.) and took aim at Amazon founder Jeff Bezos in a late-night Twitter tirade on Sunday as the White House deals with yet another spate of scandals related to Trump’s unwillingness to distance himself from Russia.

“If Elizabeth Warren, often referred to by me as Pocahontas did this commercial from Bighorn or Wounded Knee instead of her kitchen, with her husband dressed in full Indian garb, it would have been a smash,” Trump wrote, attaching a video of the senator posted on her Instagram account.

If Elizabeth Warren, often referred to by me as Pocahontas, did this commercial from Bighorn or Wounded Knee instead of her kitchen, with her husband dressed in full Indian garb, it would have been a smash! pic.twitter.com/D5KWr8EPan

In a second tweet about the senator, he criticized the video again, deeming it a “beer catastrophe.”

Best line in the Elizabeth Warren beer catastrophe is, to her husband, “Thank you for being here. I’m glad you’re here” It’s their house, he’s supposed to be there!

Earlier in the evening, Trump tweeted he was “so sorry” to hear about “Jeff Bozo being taken down by a competitor” and said he hoped The Washington Post, which Bezos owns, would be taken over by “more responsible hands.”

So sorry to hear the news about Jeff Bozo being taken down by a competitor whose reporting, I understand, is far more accurate than the reporting in his lobbyist newspaper, the Amazon Washington Post. Hopefully the paper will soon be placed in better & more responsible hands!

The comments come amid a difficult week for the president and his coziness with Russia and its leader, Vladimir Putin.

The Post reported on Saturday that Trump repeatedly moved to conceal details of his personal interactions with Putin from senior officials, going so far as to take notes from his own interpreter. The New York Times published a piece noting that the FBI opened an inquiry to see if Trump was working on behalf of Russia. And Michael Cohen, the president’s former lawyer, also agreed this week to speak with a House committee and give a “full and credible” account of his work for the president.

A separate media firestorm erupted over a phone interview Trump gave to Fox News host Jeanine Pirro. During the call, Pirro, a noted supporter of the president who appeared with him at a campaign rally last year, asked Trump about his fondness for Putin.

“I’m going to ask you, are you now or have you ever worked for Russia, Mr. President?” Pirro asked.

Trump did not directly answer the question, instead calling it the “most insulting thing I’ve ever been asked” and said he was not “keeping anything under wraps.”

The federal government is also still partially shut down as it has been for more than three weeks, with no end in sight.

Trump has routinely turned to social media in times of strife with his administration, sharing a deluge of offensive tweets or firing White House officials in an attempt to shift the conversation.

The strategy appears to have made a mark on the American public, and polls from last June found nearly seven-in-ten people feel like there’s too much going on to keep up with.

More from HuffPost US:
GOP shrugs off report that Trump concealed details of Putin meetings
Thousands Of Federal Workers Just Missed Their First Paycheck
Trump tells Sean Hannity he may decide on national emergency in 'next few days'