What abandoned sports stadiums from across the US look like today 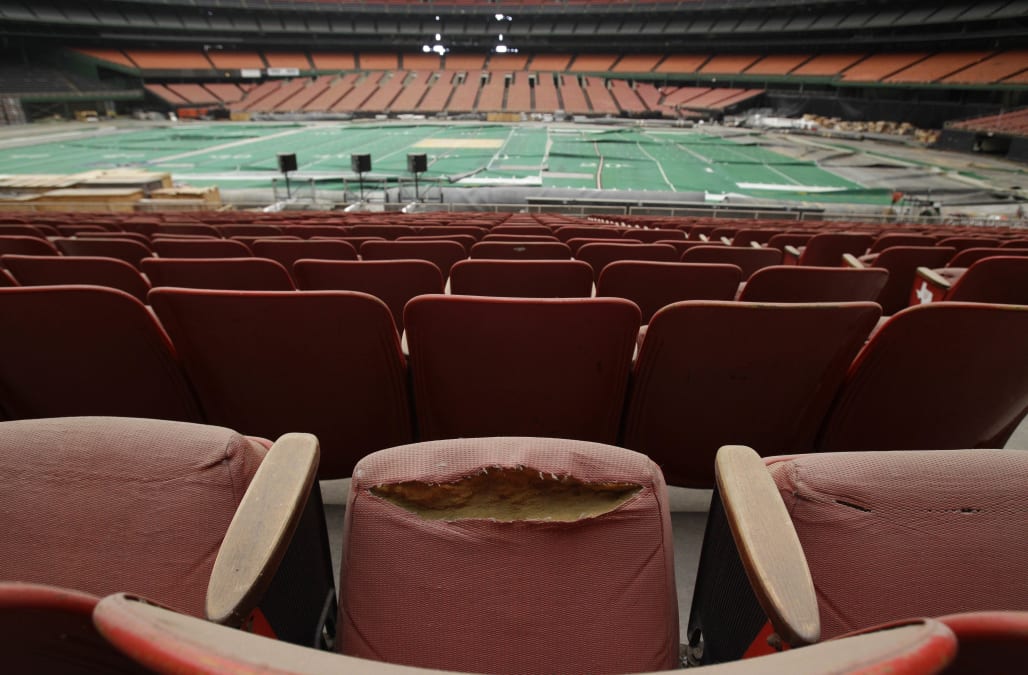 Sporting events are about so much more than what happens on the field or court, and that's why the best arenas are so well known to fans across the country.

But some formerly legendary arenas that once represented the peak of advancement have since slipped into oblivion. Legendary venues like the Pontiac Silverdome, once home to the Detroit Tigers and host of Super Bowl XVI, Uline Arena, which hosted The Beatles' first concert in the United States, and the Houston Astrodome, the stadium that many Houston sports franchises called home, look very different than they did during their prime.

Check out these stadiums' stunning transformations from relevance and fame to oblivion and, in some cases, disintegration:

60 PHOTOS
Inside abandoned sports arenas around the U.S.
See Gallery

Inside abandoned sports arenas around the U.S.

The Pontiac Silverdome was once one of the greatest arenas in professional sports.

After opening in 1975, the Pontiac Silverdome became the home of the Detroit Lions. It was the largest stadium in the NFL for 22 years.

The arena played host to Super Bowl XVI in 1982.

The San Francisco 49ers defeated the Cincinnati Bengals 26-21 and celebrated by carrying head coach Bill Walsh off the field.

With the Lions' move to Ford Field in 2002, the Silverdome lost its major tenant and all of its former glory.

The stadium — which once played host to the World Cup, the Pope, and Wrestlemania — officially closed in 2006.

The city sold the abandoned stadium to a Toronto-based Triple Investment Group for $583,000 (less than 1% of the original cost to build the facility) in 2009. The arena reopened in 2010.

Just three years later, disaster struck when a winter storm caused the roof of the arena to cave in, leaving the entire venue in tatters.

After the new owners failed to sell the dome for $30 million, the city demolished the once-great arena in 2017.

Tiger Stadium — another beloved Detroit-area arena — fell from grace at the turn of the century.

The stadium — located in the Corktown neighborhood of Detroit — first opened in 1912 as Navin Field.

It was also where New York Yankees legend Lou Gehrig famously benched himself during what would be the final game of his career due to his progressive ALS — a disease now known by his name.

By the mid-1990s, Tiger Stadium had grown outdated, so the team began constructing a new stadium in 1997. The Tigers played their final season in the much-beloved ballpark two years later.

After efforts to preserve the stadium were rejected by the city, Tiger Stadium was demolished in a years-long process.

The demolition was completed in 2009.

Now all that remains is the original field.

The Houston Astrodrome — the world's first dome stadium — was so famous and legendary that it was dubbed the "Eighth Wonder of the World."

It was also home to the NFL's Houston Oilers — now the Tennessee Titans — and, more briefly, the NBA's Houston Rockets.

Though the stadium was known for hosting baseball, basketball, and football games, many legendary events outside of those sports took place inside the dome.

Tennis great Billie Jean King famously defeated Bobby Riggs in the battle of the sexes at the Astrodome in 1973.

Even Elvis Presley performed at the Astrodome. He gave a series of performances there in 1970.

The Astrodome was closed after being cited for code violations in 2008.

And ever since, the interior has deteriorated.

The turnstiles were quite literally bent out of shape.

And the once bright-red seats became dirty and tattered.

Still, many people felt connected to the once-legendary arena, and plans to refurbish the Astrodome cropped up soon after it closed.

In 2013, Houston voters opted against allocating $217 million to turn the stadium into a giant convention center and exhibition space.

In 2018, the Harris County commissioners finally approved a $105 million project to renovate the Astrodome into more than 500,000 square feet of rentable space.

The Washington Coliseum — otherwise known as Uline Arena — was home to professional basketball teams of multiple leagues, including the Washington Capitols of the NBA.

(Photo by Matt McClain For The Washington Post via Getty Images)

But the arena was more famous for hosting events outside of the sports world. Eleanor Roosevelt once hosted a party for President Franklin D. Roosevelt at the famed venue.

Malcolm X once gave a speech there.

And, most famously, The Beatles performed their first-ever North American concert there.

They played for 8,092 adoring fans at a sold-out Washington Coliseum on February 11, 1964, just two days after their famous appearance on The Ed Sullivan Show.

After a riot broke out during a 1967 performance by The Temptations forced the venue to stop hosting concerts, things went downhill for the Coliseum. For a time, the arena acted as a jail. It was also once a trash transfer station. By 2011, it had become a parking garage.

Waste Management intended to tear down the building in 2003, but it was safe from complete demolition once the D.C. Preservation League added it to its Most Endangered Places list. Eventually, new owners resolved to renovate the arena and turn it into office spaces.

An REI store now sits in the Coliseum's former location. They've preserved a few original seats from the famous arena as a wall decoration.

(Photo by Jared Soares for The Washington Post via Getty Images)

Miami Marine Stadium was constructed on Virginia Key in 1963.

It was intended to host crowds during powerboat races, but became famous after hosting concerts and events with the likes of Richard Nixon and Sammy Davis Jr.

In September 1992, just a month after Hurricane Andrew ravaged Florida, the structure was deemed unsafe and subsequently closed down.

The stadium was slated to be demolished by the city as graffiti built up on its walls.

But famous artists Gloria Estefan, Jimmy Buffett, and others teamed up to try to save the historic site.

And as of 2018, the City of Miami committed $42 million to clean up the stadium and establish a park around it.

Candlestick Park was first proposed as the stadium for the MLB's New York Giants, who were planning to move to the West Coast.

And, when all was said and done, the ball park cost $15 million to complete.

The newly-minted San Francisco Giants played their first game there in April 1960.

The Oakland Raiders — then a part of the American Football League — played part of the 1960 and 1961 season at Candlestick Park.

The San Francisco 49ers moved in from Kezar Stadium for the 1971 season and made Candlestick Park their home stadium for more than 40 years.

Over the years, the arena was home to five Super Bowl Champion teams and multiple Hall of Fame players, including wide receiver Jerry Rice and quarterbacks Joe Montana and Steve Young.

The Giants moved out of Candlestick Park after the 1999 MLB season. At the time of their final home game, it was unclear whether the team would relocate to Florida or to a different stadium in the Bay Area. They chose the latter.

The 49ers stayed at "The Stick" for another 13 years, playing their final home game there in December 2013.

Rather than using wrecking balls or dynamite, construction crews demolished the stadium piece by piece.

And soon enough, the stadium was gone. The plot of land was meant to become a shopping mall, but work was suspended midway through 2018.

The 25 best college football stadiums according to fans