Toddler locks herself in bunny cage in hilarious clip 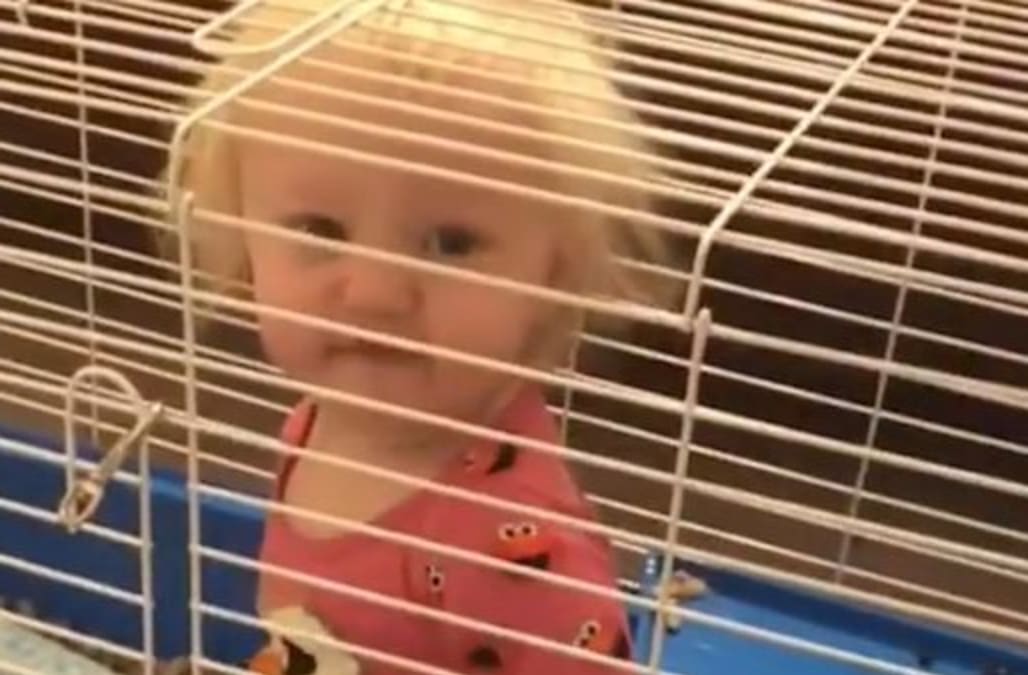 Every new mother knows when things go quiet, your child is probably up to no good.

That is what happened when Michaela found her daughter Sadie locked in a cage with her new pet bunny. “Sadie is an animal lover, but most animals don’t like her,” Michaela said.

The little adventurer has had battles with the family cat, and a few funny encounters with puppies as well. “I have [a video] of a puppy pulling her pants down like the Coppertone baby.”

See Also: Fed-up dad gets creative to get stubborn daughter out of the airport

Though she found the moment hilarious, Michaela admits it wasn’t the first time her rambunctious toddler has gotten into mischief. “She is always getting into weird things and doing strange stuff like flips off the couch or hiding in a box. [One day] I found her in one of those storage bins watching TV,” Michaela laughed.

In this particular instance, Sadie found her way into the locked cage and squatted down to grab the bunny. Her mom caught her on camera, getting cozy and adorably reaching for the pet, saying “bunny, bunny” as it tries to avoid her grasp.

Though it is many people’s worst nightmare to be locked up, Sadie didn’t mind at all. In fact, Michaela says they had a hard time getting her out of the cage.

See the adorable clip above.

Thanks to SNL’s breakout star, this nickname for Aiden or Adele has class, sass and serious staying power.

Whether you’re channeling the classic (Chanel), the modern (Pixar’s latest blockbuster) or the Cox-Arquette, this one (a derivation of "cocoa") has good taste on lock.

Meaning “sea” in Hawaiian and “forgiveness” in Japanese, this unisex name was among the top 100 U.S. baby names last year and is up 11 points since 2016, according BabyCenter.

Safer than Jagger, fresher than Jaden, the fifth most popular name of 2017, meaning “bringer of treasure,” continues to “rocket up the U.S. ranks,” according to Nameberry.

The Today host could use a hug, and possibly your child named in her honor. And since this is the 40th most popular girl’s name in the U.S., it’s both unique and uniquely recognizable.

Leave it to Molly Sims to make an eternally cool yet utterly refreshing choice.

Conjuring classic denim and the children of both Matthew McConaughey and Sheryl Crow, the 29th most popular name of 2017 is steadily climbing the charts.

In Celtic it means a pledge, or a promise. In 2018 it means deserving of an Oscar—and a Pulitzer.

Of Irish origin meaning “wise,” it works for both boys and girls, as either a first or a middle name. Pretty smart indeed.

While Patrick Swayze’s Point Break surfer will always be the original Bodhi to us, Nikki Reed and Ian Somerhalder made waves when they gave this increasingly popular name to their baby daughter.

Attention-grabbing and presidential, experts predict it will become one of the top five most popular baby names next year—for girls.

Predicted by some to be the number one name for boys in 2018, it didn’t even crack the top 100 last year.

Ever since Rachel Bilson named her daughter Briar Rose, and Ashlee Simpson and Pete Wentz gave their son the middle name Mowgli, Disney names have been fair game. The experts at BabyGaga predict Sleeping Beauty’s given name—already the eighth most popular of 2017—will be a sleeper hit again next year.