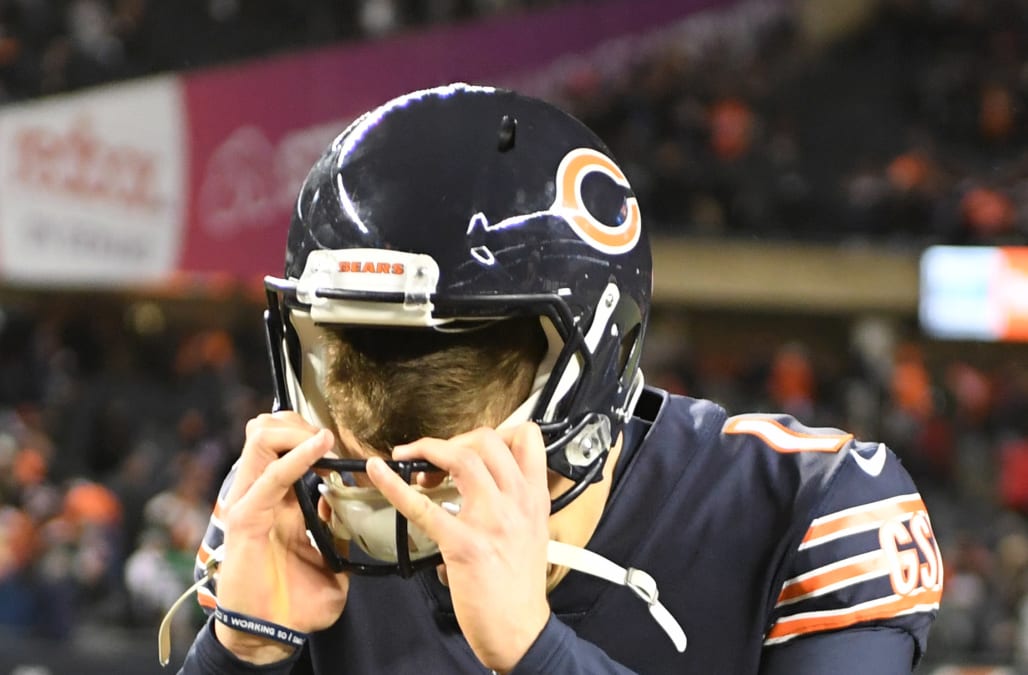 CHICAGO – The field goal straight out of his worst nightmare had sailed crooked through the night. Defensive lineman Treyvon Hester had tipped it ever so slightly, and perhaps that was enough to cause the horror show to happen, the ball eventually banging off an upright at Soldier Field, then bouncing off the crossbar before heading back toward where Cody Parkey had launched it, 43 yards away.

Chicago’s failed game-winning field goal caused the Philadelphia Eagles to race around the field in celebration, a 16-15 playoff victory now in hand, and caused Parkey to put his hands on his knees, bend over and look like he was about to vomit.

Bears fans no doubt felt the same way as Parkey was loudly booed while walking off the field and through the tunnel after the game. That rage, anger, frustration and every other emotion that will be hurled Parkey’s way on social media and radio call-ins over the ensuing days, weeks, months, and let’s face it, years.

Parkey was essentially dead inside, a rough season, temporarily redeemed by a good playoff game (three made field goals), finally capped in the worst possible manner.

He thought he’d hit it well. He tried to play into the wind that was cutting left to right toward Lake Michigan. He hit three successfully in that direction already, plus another one just moments prior that was nullified by an Eagles timeout.

He didn’t, then or even postgame, know that Hester had gotten a finger on it, perhaps just enough in a game of millimeters and angles. When it got past the Eagles line, he thought it would work, thought he and his teammates would be onto Los Angeles, onto to one more game of this magical season.

“I thought I hit a good ball,” Parkey said.

He thought wrong. Then he thought it couldn’t feel much worse than this.

“You can’t make this up,” Parkey said. “ … I feel terrible. I let the team down … Hit the crossbar and the upright … That’s one of the worst feelings in the world to let your team down. I feel terrible.”

It was about then, as professional hell rained down upon him, that the meaty right hand of offensive lineman Bobby Massie grabbed him by the shoulder pad and lifted him up, literally and emotionally. Massie soon pulled Parkey into a hug. Massie goes 6-foot-6, 317 pounds. Parkey is 6-0, 190. Maybe. The kicker’s head barely reached the middle of the big man’s chest, but that didn’t matter, the gesture was as gentle and as supportive as possible.

As Parkey trudged off the field, still stunned that his kick didn’t carom in, still sick that he’d blown the entire thing, he found that Bobby Massie wasn’t the exception. He was the rule.

Up and down the Bears’ sideline, players and coaches came to pull on his shoulder, or get their face in front of his, or even shout through his earhole. Pats on the back. Words of encouragement.

The Bears had brought Parkey in from Miami, signing him to a four-year, $15 million deal. He was supposed to solve the kicking game. He didn’t. He tied for second most missed kicks in the NFL this season. In a November game, he hit the uprights four times.

And now their shaky kicker had just kicked away a playoff win, just ended the season prematurely, but for whatever it was worth, and it very well one day may be worth a lot, no one was leaving him out on an island of anguish.

The team was going to still be the team. The Bears were going to be the Bears.

Khalil Mack told him, “keep your head up,” in an effort to keep Parkey from slinking into a dark place.

Kyle Long came by and told him, “dude, you accounted for half our points … We could have done more as an offense.” He meant it, too. “If I had made a few blocks the Eagles would have had less time to make it down the field [for their final minute, go-ahead touchdown]. I look at it that way. If the four-minute offense had been better.”

Eric Kush told him that everyone could have done more. “I just didn’t want him to think it was his fault,” Kush said.

Afterward Parkey sat at his locker and answered for the miss. There was no denying the pain in his face or the awareness that this would haunt him for a long time. Supportive words are supportive words, but he kept taking the blame for the defeat. He’s the kicker. The kick failed.

He said he’d find a way to cope, first by talking with his wife on the ride home and eventually his dog once he got there because, “he’s not going to care if I make it or miss it.”

It was gallows humor. It didn’t cheer him up.

“This is a terrible feeling,” Parkey said. “I can’t hide that.”

And yet there were the rest of the Bears, still consoling him. And so no matter what public scorn was coming, that whatever clanking that final kick might mean to his future with the club, there was still support here with the guys who mattered most.

“Every single one of them said they’ve got my back, they love me and to not let this affect me,” Parkey marveled.

“That’s our guy,” Akiem Hicks said. “I’m going to ride with my guy. If you have that ‘C’ on your helmet I don’t care what happens on the field. We are together. So that’s it.”

There is an old adage that teams learn more in defeat than in victory and it’s probably true, although there is no lesson, even one about the value of team lifting the individual, worth the price of a playoff loss.

Really though, the Bears didn’t as much learn about themselves as reaffirm what they are about, that this isn’t just a collection of talent primed for more 12-4 seasons to come, but a brotherhood that can separate the good from the great. Slogans about being a team are one thing. Proving it is another.

“This group is a special group,” Long said. “I’ve never been a part of a group like that.”

And it’s not a group that is going anywhere.

The kicker still looked shell-shocked and uncertain about the difficult nights ahead. Nothing was going to change that. Across the room though there were just words of understanding and determination.

“We can’t see it right now,” coach Matt Nagy said. “But I guarantee you that feeling we just had in the locker room is going to help us in the future.”

More from Yahoo Sports:
Nick Foles does it again, leads Eagles to last-minute win over Bears
Officiating chaos reigns when apparent Bears fumble ruled incomplete pass vs. Eagles
Allen Hurns, who suffered awful leg injury, says he should be back next season