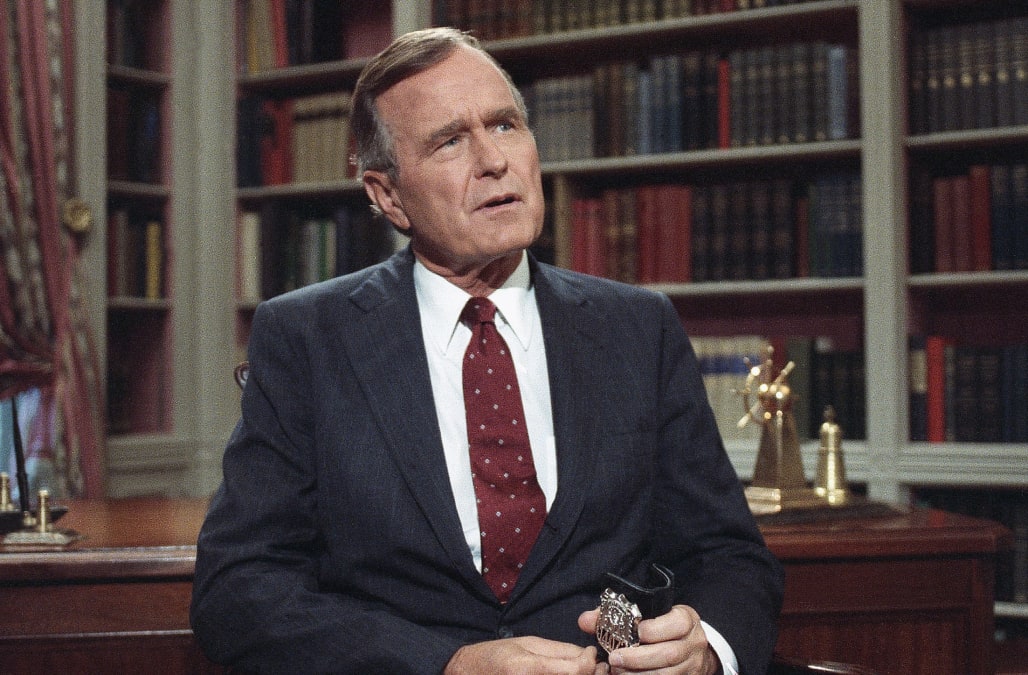 During his four years in the White House, a lot of things ended up on President George H.W. Bush’s desk.

But one of the items he held most dear belonged to someone he never met — the badge of rookie NYPD Police Officer Edward Byrne, who was murdered by drug runners in 1988.

The former president — who died Friday at 94 — carried Byrne’s shield with him during his campaign and kept it on his desk in the Oval Office.

“He was really deeply affected by what happened to Eddie and he was committed to doing all he could to keep cops safe,” Byrne’s brother, retired NYPD Deputy Commissioner of Legal Matters Lawrence Byrne said Saturday. “It was frankly very comforting to know that he had Eddie’s badge on his desk. It meant that every day he thought about him and all the law enforcement officers out there who are put in harm’s way.”

Police Officer Edward Byrne was shot to death on orders from notorious drug dealer Howard (Pappy) Mason as he guarded the Queens home of a witness known only as Arjune, a Guyanese immigrant, on Feb. 26, 1988. He was just 22 years old.

Arjune’s house was previously firebombed in an effort to silence the witness, who was slated to testify in cases against local drug pushers.

That fall, Byrne’s father Matt Byrne, a 22-year veteran of the NYPD, met with then-Vice President George H.W. Bush at a Queens campaign stop and gave him his son’s shield.

Bush kept it in his pocket during his presidential run. After he won the election, Bush invited Matt Byrne and his wife, Ann, to his inauguration.

When he was in the White House, the shield was moved to his desk, Lawrence Byrne remembered. Bush later donated it to his Presidential Library and Museum in Texas.

Early on in his presidential career, Bush vowed to finance a crackdown on drug gangs across the nation. He helped create the Byrne Justice Program, which provided money to the Department of Justice for drug investigations and takedowns.

During his years in the White House, Bush never forgot the Byrne family — particularly Matt and Ann, Lawrence Byrne said.

“He and Barbara (Bush) would have them come down to a private dinner at the White House and then they would go to the screening room to catch a movie,” he remembered. “They would just call and say, ‘Just come down, we would like to see you.’”

Byrne’s mom and the First Lady also became friends, finding a common bond over each losing a child, he said.

In the decades that followed, the Bushes and Byrnes stayed in touch.

In February, when the NYPD marked the 30th anniversary of Officer Byrne’s death, Bush sent a note.

“He wrote a very nice letter to the police commissioner,” Lawrence Byrne said. “This is a guy in his 90s and he took the time some 30 years later to write a letter thanking Eddie for everything he did.”

“It truly meant a lot to us,” he explianed.

“I spoke to her today,” he said. “She was sad as she remembered how kind they were.”

“They gave my family great support after the tragedy,” said Byrne, who hopes to attend one of the services for the fallen President.

“For all that has been said about them and for all that they did for this country, George and Barbara Bush were very down to earth,” Byrne remembered. “They were fundamentally good people.”