'Never Trump' Republicans went Democrat in 2018. Are they gone for good? 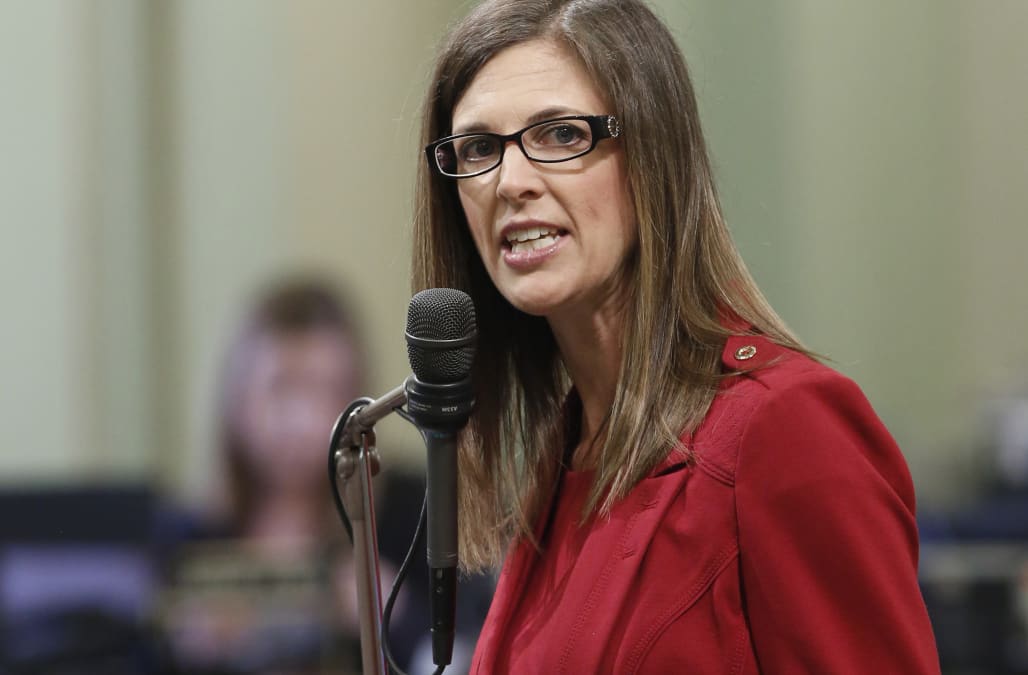 WASHINGTON — Kristin Olsen, who until 2016 led the Republican caucus in California's state assembly, surveyed the wreckage of the recent midterms in her state and came to a bitter conclusion: "The Grand Old Party is dead," she wrote in an op-ed.

Olsen, 44, told NBC News that Republicans had already struggled to adapt to a changing state, but the "division, hostility, vindictiveness, and lies" coming from President Donald Trump's White House was a knockout punch.

"It was the straw that broke the camel's back for many, many, many Republican voters," she said.

In the Central Valley, where Olsen is a county official, a surge in Latino turnout overwhelmed four-term Congressman Jeff Denham. But the most jarring losses came in suburban Orange County, an iconic GOP enclave where Richard Nixon was born and buried and where anti-tax activists helped lead the Reagan Revolution. Democrats won all four GOP-held seats.

Figures like Olsen, who identified as Republican but opposed Trump in 2016, were often mocked as irrelevant after his victory. Polls showed Republican voters united behind his presidency, despite nagging opposition from retiring GOP politicians and a handful of conservative pundits.

But the midterm wave, where Democrats won close to 40 seats and romped in the suburbs, seems to have included a lot of voters who look like Olsen.

Republicans coming out against Donald Trump

Arizona Senator John McCain: "I will not vote for Donald Trump."

Texas Senator Ted Cruz: Trump's comments are "disturbing and inappropriate, there is simply no excuse for them."

South Carolina Senator Lindsey Graham: "I have never been comfortable with Donald Trump as our Republican nominee."

Former Secretary of State Condoleezza Rice: "Donald Trump should not be President."

Alaska Senator Lisa Murkowski: "I cannot and will not support Donald Trump for president."

Nebraska Senator Ben Sasse: Donald trump "is obviously not going to win [and should] step aside."

Idaho Senator Mike Crapo: Donald Trump should step aside due to "disrespectful, profane and demeaning" behavior.

Maine Senator Susan Collins: Donald Trump is "unsuitable for the presidency ... I [can] not support his candidacy."

Texas Senator John Cornyn: "I am disgusted by Mr Trump's words about women."

Former Utah Governor Jon Huntsman: "The time has come for Governor Pence to lead the ticket."

Colorado Representative Mike Coffman: Donald Trump should withdraw "for the good of the country."

Missouri Representative Ann Wagner: "I withdraw my endorsement and call for Governor Pence to take the lead" in the race.

Colorado Senator Cory Gardner: Donald Trump's flaws are "beyond mere moral shortcomings ... I cannot and will not support someone who brags about degrading and assaulting women."

New Jersey Representative Scott Garrett: Has stated he is "appalled" by Trump's actions.

Tennessee Governor Bill Haslam: Trump should "step aside and let Gov. Mike Pence assume the role as the party's nominee."

Utah Governor Gary Herbert: "I will not vote for Trump."

"It was the revenge of the Never Trumpers in the House," said David Wasserman, an elections analyst for Cook Political Report and an NBC News contributor and senior analyst with the NBC Election Unit.

One analysis by Democratic firm Catalist showed a 24 point swing among white college-educated woman toward Democrats from 2014 to 2018.

Exit polls also showed Democrats cleaning up with independents by a 12-point margin, a group Republicans won as recently as 2016 and even in 2012. That could be a sign that some recent GOP-leaning voters no longer identify with the party, which would come as no surprise to Olsen.

"There's not a week that's gone by over the last couple of years that I haven't thought about whether it's time to change my registration to 'no party preference,'" Olsen said. "It's a daily struggle for me."

Both parties are still sifting through mountains of data and it will take time to determine how many converts Democrats won versus how much their base's enthusiasm carried the day.

But strategists, pollsters, and nonpartisan analysts who spoke to NBC News say the early data points to a serious problem for the GOP with voters they once counted on, especially suburban woman, even as they've made gains with ex-Democrats in rural areas and small towns.

Republicans in many of these suburban districts survived waves before. Trump ally Rep. Dana Rohrabacher had held his Orange County seat since 1988, and the local party chair confidently predicted all four GOP members in the area would do so again.

But in a telling sign, Rohrabacher lost to a Never Trump ex-Republican. Congressman-elect Harley Rouda, who donated to Ohio Gov. John Kasich's presidential campaign in 2016, focused on winning moderates like himself who Trump had enraged.

Determining how many of these formerly Republican-leaning voters switched in 2018 and what they want has significant implications for both sides.

Already there are voices on the left nervous that a marriage of convenience with anti-Trump centrists could make it hard to enact an ambitious progressive agenda. On the right, some think there's a chance to win these voters back, either after Trump departs office or sooner if the 2020 Democratic nominee scares them off.

Perhaps the most burning question is how much of the midterm shift was due to individual policy debates and how much was due to antipathy toward Trump's personal behavior.

"When you look at midterm elections, mostly they're driven by people's attitudes towards the president," Glen Bolger, a Republican pollster at Public Opinion Strategies said. "I think it's a number of different things, including concerns about how he treats people, and some of it's on issues as well."

Attitudes toward Trump drove many of these same voters to Hillary Clinton and third party candidates at the presidential level in 2016. But it's possible Trump merely gave Democrats an opening to break off parts of the GOP coalition that were already trending their way.

Various issue advocacy groups are rushing to claim that their issue was the one that won these voters over and some of them have a decent case.

A number of candidates in suburban districts emphasized gun safety and Michael Bloomberg — himself an ex-Republican politician — invested $110 million to amplify their message in 24 races, with Democrats winning 21. Immigration groups say Trump's constant attacks on asylum seekers from Central America turned off voters in diversifying areas and Republican and Democratic officials alike say there's evidence to support the claim. Then there's health care, which was the dominant topic in most Democratic campaigns and the top issue for a record 41 percent of voters in exit polls.

Kendra Horn, who won one of the biggest upsets of the midterms in Oklahoma's 5th Congressional District, said cuts to education and concerns about health care gave her a wedge to pry away Republicans voters in the suburbs.

"This is a place where everyone used to whisper if they were progressive," Horn said at a post-election panel hosted by Democratic data firm TargetSmart in Washington. "Then they woke up and realized 'Oh, we agree on these issues' and that even included moderate Republicans because the conversation had shifted so much further to the right."

Democratic strategists said the health care message was particularly valuable because, unlike guns or immigration, it could slot into any campaign without generating a backlash on the other side. Instead, Republicans tried to co-opt the same message by promising protections for people with pre-existing conditions.

"If you look at their views on bigger issues (health care, immigration, environment, etc.) beyond just Trump, it looks like it's bigger than him," Will Jordan, a Democratic pollster at Global Strategy Group, said. "Trump feels more like a catalyst, and it's partly true for the problems Democrats have been having with non-college whites too."

But Whit Ayres, a Republican pollster, thinks Democrats should be wary about taking these voters for granted given Trump's unique presidency. In his eyes, the fact Republicans performed so poorly even as polls showed voters optimistic about their financial prospects suggested that the conversation in the suburbs was about character more than the usual policy fights.

"What these people are evaluating the president's job performance on is his conduct and behavior in office, not the state of the economy," he said.

In 2018, Democratic women ran for office, donated to candidates, and participated in activism in historic numbers, and there's plenty of signs that Trump's personal attitude toward women and dismissal of high-profile sexual misconduct claims boosted Democratic arguments beyond the liberal base.

Brian Schaffner, a professor of political science at Tufts University, analyzed pre-midterm surveys collected by liberal analytics firm Data For Progress and found a clear trend: The more voters showed concern about "hostile sexism" in their questions, the more likely they were to vote for Democratic House candidates. This relationship held even while controlling for other factors like partisanship and ideology.

While that might sound intuitive, surveys in 2016 found that attitudes toward sexism only affected respondents' choice for president, not their vote for Congress. The shift in 2018 suggests Trump's brand has started to drag down the party as a whole.

"I do think this is a major reason why college-educated white women swung more Democratic in this election," Schaffner said in an email. "That group tends to register the lowest levels of sexism of any other group and since sexism was a predictor of the House vote in this election, it seems to be something that has pushed them away from voting for Republican House candidates."

Orange County might offer some hints that the old conservatism may still be kicking, or at least twitching, when it comes to policy.

In the 45th district, Katie Porter, a progressive candidate backed by Elizabeth Warren who supports Medicare For All, defeated Republican Rep. Mimi Walters. But Porter also borrowed from the traditional GOP message in the area by running ads opposing a Democratic-passed increase in the state gas tax to fund infrastructure. And, like many candidates in upscale districts, she attacked Republicans for running up deficits with a tax law that penalized certain upper middle class homeowners.

It's possible Democrats will lose some voters drawn to their midterm message if they pursue tax increases of their own to fund bold projects like free college, single-payer health care, and a guaranteed jobs program. But that problem could be a ways off, especially if Trump continues to offend these swing voters rather than try and repair the damage.

"The difference between what Trump could do and what he will do is a chasm," Ayres said.