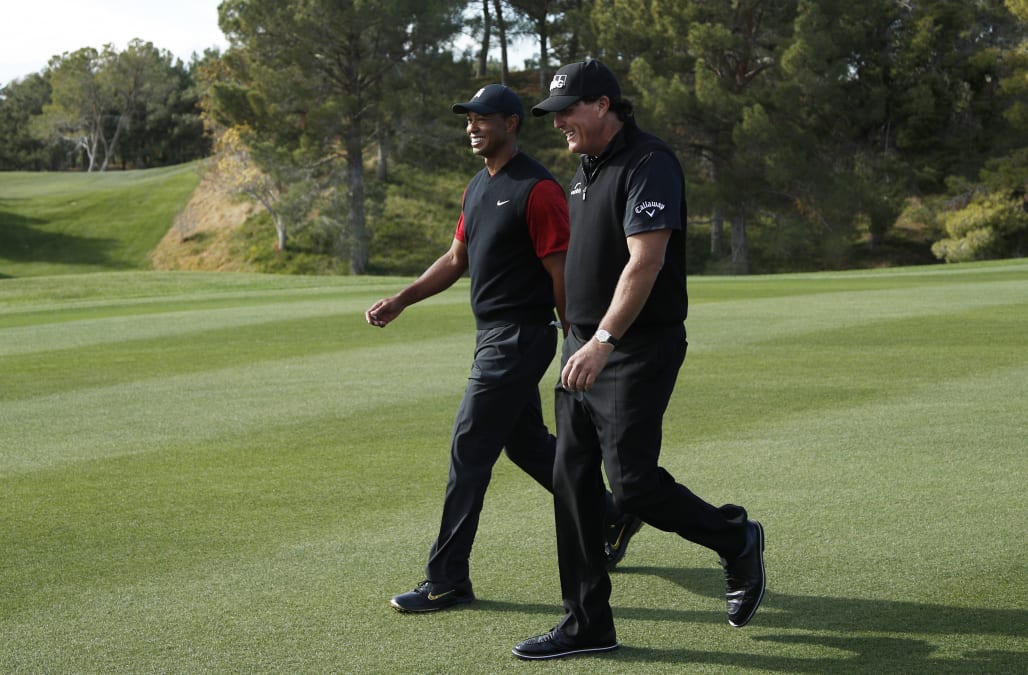 It’s over! Phil drilled a 4-foot putt on the 22nd hole of the day to end the epic match and take home the $9 million prize. Both players hit good tee shots, but Tiger missed from 7 feet. Phil did not miss this time.

Huge missed opportunity for Phil. He missed about an 8-foot putt for the win after Tiger hit beyond the green once again. Tiger actually still had a pressure-packed 4-footer left to tie it, but while Tiger was lining it up, Phil conceded the putt, saying “I don’t want to win like this.”

In a very short, custom hole to decide it all, Tiger hit past the green and into the rough while Phil’s shot landed pin high and about 15 feet from the cup. Tiger went up-and-down and Phil missed the potential clincher. We’ll continue to play this same hole over and over again until a winner is decided. Buckle up.

Playing the same hole over again, Tiger hit it in the long grass off the tee, forcing him to lay up on his second stroke. Phil was in much better shape, but he squandered the opportunity and put his second shot in the bunker across the creek from the green. A tough lie made it impossible for him to put the ball anywhere near the pin on his third. So he settled for a two-putt for the par.

Tiger’s third shot was a beauty, leaving him 8 feet for birdie and the match. No sir. We will play another.

A short par 5 is an inviting birdie hole and therefore an ideal one to finish a match-play round. Tiger was solid off the tee but his second shot went a little long and right, leaving him a 45-foot putt for eagle. That putt missed. Phil hit two good shots to give himself a 32-footer to win the $9 million. That also missed. Both birdied it and we will play on until a winner is decided. Free golf!

A gorgeous hole brought some drama, as Phil continued his success on par 3s with a strong tee shot to get within birdie range. Tiger’s shot went just beyond the green. But in the first real big shot of the day, Tiger buried the birdie chip from about 40 feet out. We even got a signature Tiger fist-pump out of it. Phil’s putt lipped out. And somehow we’re tied going into the final hole.

The longest hole on the course demands three great shots. Each player found the fairway off the tee, but neither could get to the green in two. A pair of ugly chips left them with long putts for birdie. Naturally, neither one of them delivered. Time is running out for Tiger.

There’s a noticeable rise in tension as we head down the home stretch. Less chit-chat and more focus from the players. Even Phil noticed the change in tone, saying “I’m trying to be more talkative, but I’m just not on this back 9.”

Tiger and Phil hit the fairway off the tee but they both missed the green on the approach shots, Phil left and Tiger short. Phil hit a much better chip to set up a tap-in par. Tiger missed another fairly short putt, and he is once again behind in the match.

A long drive bet for $100,000 was spoiled when both players hit it in the bunker off the right side of the fairway. Despite the off-target drives, both players hit impressive shots out of the bunker to get within striking distance. Both putts just missed the edge, and Tiger and Phil walked away disappointed with par.

Tiger threw out a $300,000 challenge for closest to pin, and Phil took it down again. That puts Phil up to $600,000 in charity side bets won on the day compared to $200,000 for Tiger. And this time, Phil also took advantage of his tee shot, sinking a 9-footer for the birdie and the hole to get things back to all square.

Tiger appears to have some momentum. He hit two perfect shots to put the ball a couple feet from the cup, which led to Phil conceding the birdie. Phil had a much longer putt to try to halve the hole but he misread it, so Tiger takes his first lead of the match.

The shortest par 4 on the course invites players to attack the green off the tee. And it also invited another side bet for charity: $200,000 if either player holes out in 2 strokes. Once again, no dice. Both of them went a little long of the green on their first shots, and while Tiger chipped it close for an easy birdie, Phil’s chip was off the mark. His birdie attempt missed right and Tiger took the hole.

Two good tee shots led to a bad approach by Tiger and a so-so one from Phil. A two-putt from Phil and a strong chip and putt from Tiger resulted in another tie.

While standing on the tee, Phil offered up $100,000 if either player made an eagle on this short par 4. Then, a few moments later, he added a zero to it. So it was a shot at a whopping $1 million. So of course neither player came anywhere near the hole in two shots. Tiger went way long and left himself a treacherous and long birdie putt while Phil wound up in the bunker short of the green. Tiger two-putt for par and Phil made it up-and-down to halve yet another one.

Charles Barkley chimed in midway through the hole: “I just wanna let America know this is some crappy golf.” Indeed, these guys not on their game right now.

Phil took down another closest-to-pin prize, this time for $200,000, while also recapturing the overall lead. Neither player hit it very close to the cup, as Phil’s ball ended up 38 feet away compared to Tiger’s 40 feet. As for then putts, both were pretty awful as Tiger’s came up well short and right and Phil smacked it a few feet past. Tiger lipped out from about 6 feet while Phil drilled it for a hole-winning par.

OK, things finally got a little interesting here. Phil’s drive just missed the fairway to the right and Tiger hit his down the middle, at which point Tiger proposed a side bet. “Low score on the hole from here for $100,000.” Phil wanted 3 to 2 odds in his favor because his ball was in a worse spot, but Tiger wasn’t having it. The side bet was rejected, and Tiger gave Phil some grief for it.

Apparently that got in Phil’s head, because he dropped his second shot in a bunker and made a major mistake by dunking his third shot in another green-side bunker. Tiger hit a brilliant long putt for his third stroke to secure a tap-in birdie. Phil failed to hole out from the bunker, and suddenly the match is all tied up!

Phil striped yet another drive right down the middle, but this time Tiger followed suit with a perfect 350-yard bomb. That was necessary on this extremely long part 4. Phil hit a nifty second shot, using the back stop behind the green to spin the ball back into the makable birdie zone. Tiger also left himself a reasonable chance at a birdie, but both players missed. Neither has made a putt outside of about 5 feet today.

The first par 3 of the day featured a $100,000 closest-to-pin competition. Phil took down the cash (which will go to charity) by hitting his shot within 8 feet of the pin. Tiger’s ball didn’t come close, and his long birdie attempt was well off the mark. With a chance to win the hole, Phil left his putt just short. Tiger sank it to halve another one.

The betting public is starting to lean toward Phil, and it’s easy to see why. He’s hitting fairways off the tee and Tiger continues to miss. He had to chop the ball out of the ultra-deep grass and lay up while Phil put his second shot just short of the green. But of course Tiger is one of the best scramblers of all time so he stuck his third shot within a few feet of the hole. Phil chipped his tight as well and both players had short and easy putts for birdie. Both players conceded the putts for another tie.

“This sucks,” Tiger said as he walked toward his errant tee shot that ended up way right and behind a tree. He had to punch out onto the fairway, while Phil easily hit the green on his second shot with a chance to birdie for the victory. Phil missed the lengthy putt and Tiger got up-and-down for par to halve the hole.

On another relatively easy hole, neither played the hole very well. But Phil Mickelson strikes first after Tiger missed a simple 4-footer. Both players missed the green on their approaches and both hit poor chips to leave tough part putts. Phil sunk his from 5 feet and Tiger’s putt lipped out.

Samuel L. Jackson introduced the two golfers on the opening tee, because we need to fit in as many celebrities as possible. Both Tiger and Phil hit iron off the tee, and then we had to watch 2 or 3 minutes of forced conversation as they walked to their shots. There’s going to be a lot of awkward filler time in this round.

Both players hit solid second shots to give them reasonable birdie putts. Tiger went first and just missed, so Phil faced a putt with a $200,000 side bet on the line — and it failed to drop. Both players par it but Tiger wins $200K. Not a bad take for one hole of golf.

The pre-match commentary featured an odd mix of personalities: PGA golfer Pat Perez, actor/comedian Ben Stiller and NBA legend/wacky analyst Charles Barkley. They’re clearly trying to give this a NBA on TNT feel (Turner owns Bleacher Report, which is running the broadcast). There’s $200,000 on the line on the very first hole, so let’s get started.