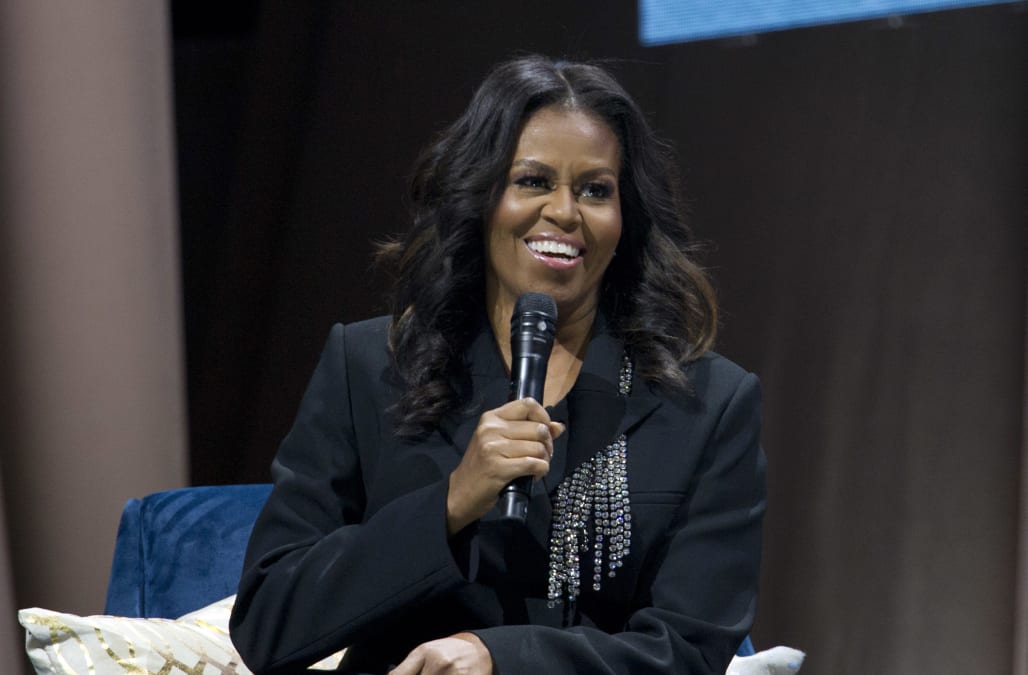 LONDON — The morning that tickets went on sale for Michelle Obama’s book tour appearance in London next month, Cyrielle Bedu, a Paris resident, got up early to get in the virtual line.

Three hours before sales opened, Bedu became the 33,000th person seeking a shot online at one of the 2,700 tickets available to the Dec. 3 event.

While welcoming crowds and packed venues have so far punctuated Obama's 15-stop tour publicizing her new memoir, "Becoming," in the U.S., in Europe the former first lady has become a figure of intense admiration — especially among women of color.

“When she speaks, she manages to speak to the whole world,” said Bedu, 30, whose mother came to France from Togo and her father from the Congo.

“It’s like going to see Beyoncé — she’s like a rock star. She means so much to us," she said. "In France we don’t have figures like that.”

At the London event, Obama, 54, will be in conversation with the acclaimed Nigerian novelist Chimamanda Ngozi Adichie, a draw in her own right.

Most of those who waited for tickets were disappointed. Soon after the event sold out, tickets popped up on online re-sellers, with prices reportedly rising into the thousands. They were quickly taken down after complaints from the venue.

Obama’s one appearance in Paris, on Dec. 5, was announced just before tickets went on sale. They were in high demand, though the event didn’t sell out as quickly as in London. Bedu — along with friends who had also hoped to see Obama in London — managed to get tickets to the Paris appearance, though they didn't come cheap. The least expensive tickets were on sale for 54 euro ($60).

Before the memoir was released, it topped Amazon’s best-seller lists across Europe and the U.S., where it has remained since it came out on Nov. 13.

An accomplished lawyer in her own right, Obama campaigned at voter registration events during the recent midterm elections.

But it isn't her husband or the causes she espouses that are the real draw: Her popularity is especially pronounced among women who identify with her upbringing and see her as a role model.

“She is a black woman we could all connect with," said Tobi Oredein, the editor of the U.K. online magazine Black Ballad, aimed at black women. "That she happened to be American was a side thing. She has a global appeal."

Earlier this year, Obama was named the world’s second most admired woman, behind Angelina Jolie, according to a YouGov study that covered the views of people in 35 countries. Barack Obama came second in the category for men.

The fanfare surrounding Michelle Obama is all the more notable when compared to popular opposition to President Donald Trump in the U.K. When he visited London in July, tens of thousands of people took to the streets in protest.

“At the moment, because Trump is so disrespected in this country, her currency has increased,” said Sylvia Ellis, a professor of American History and a presidential historian at University of Roehampton in London.

Obama's visage even looks down on passers-by in Brixton, a neighborhood dubbed "London's Harlem," where the artist Dreph painted a three-story high mural of the former first lady, in partnership with her publisher, Penguin Books.

“Michelle Obama is always open in giving us an insight into what it looks like to push through and forge our own paths,” wrote the artist on an Instagram post about the mural.

An evening with Michelle Obama & Chimamanda Ngozi Adichie in London and I don’t get to witness it! Smh. Why not give them the whole o2 so we can all bear witness to this greatness?! https://t.co/ukNeOw0lmi

Obama’s appearances on comedian James Corden’s popular "Carpool Karaoke" segment and on the talk show “Ellen,” have contributed to impressions of her as down to earth and relatable, said Ellis. On the first night of her book tour, Oprah Winfrey interviewed Obama on stage, where she talked about what life was like in the White House and how the couple kept their two daughters grounded.

"The first thing we thought was, while we are having pancakes in the morning, it's just crazy to have a man in a tuxedo come in," Obama said. "When you got some little girls at a sleepover and he's bringing in some water. So we canceled the tuxedos."

Obama traveled to London twice while her husband was in office, in 2009 and 2015. Both times she visited girls’ schools where she stressed the importance of education.

Maryam Baig of London said Obama's social campaigns as first lady regularly featured in conversations with friends, and she also tried to buy tickets for Obama’s London appearance, even though she was more than 10,000 places back in the virtual line.

“She has a poise and grace that makes her inspiring to young women of color. She motivates you to take on the world, and shows that you can do it despite racism,” said Baig, 29, who is of Ugandan and Pakistani descent.