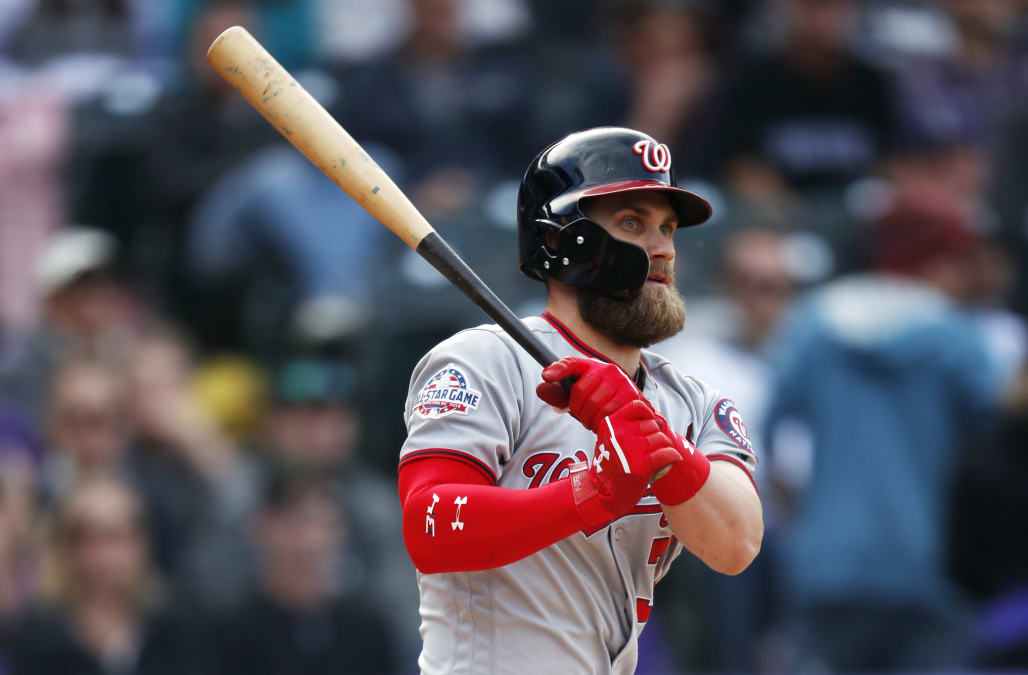 Thanksgiving is here, which for baseball fans typically means a quiet time. Sure, the New York Yankees just struck a trade for Seattle Mariner ace James Paxton, but we’re still in that phase where the appetite for news outweighs the actual news by a wide margin.

If you love football, great. That will surely help you pass the time. If not, well, we don’t have to tell you there will be some boring days ahead. Especially Thanksgiving Day, where you’ll spend most the day surrounded by family and engaged in awkward conversation about football and politics. But it doesn’t have to be that way. It can be filled with baseball discussion too. You just have to know your audience and which topics will get a reaction.

We’re here to help. We’ve listed a few baseball topics that we’re certain everyone at the table will at least be familiar with or have an opinion on.

How much is Bryce Harper worth?

Here’s one that’s sure to have a some strong opinions even from the casual or even non-baseball fans. That’s because Harper’s one of those figures that transcends the sport. And honestly, it’s also because Harper’s free agency has been built up for years, really dating back to the moment Harper’s agent Scott Boras threatened a grievance over Harper’s 2015 salary.

What we know has everyone’s attention is the amounts of money being connected to Harper. At one point a $500 million deal seemed realistic for the 26-year-old former MVP. Now Harper’s likely to settle somewhere between $300 million and $400 million over anywhere from 10 to 12 seasons. Absurd money any way you slice it, which is why you’ll surely get a few bites.

If you’re watching with football fans, you might as well point out that Jeff Samardzija made the right call choosing baseball over football after being a standout in both sports at Notre Dame. The 11-year veteran has earned $83 million over his career. The five-year, $90 million deal he’s currently playing with is more than Le’Veon Bell, arguably the NFL’s best running back, will receive on the open market. All this for a solid, but certainly not dominant pitcher.

The 26-year-old infielder was a polarizing figure during the postseason. It started when he decided it wasn’t worth running out a few ground balls during the Los Angeles Dodgers run to the World Series. It reached a fever pitch when Machado said it didn’t really matter. Hustling just isn’t for him, regardless of the circumstances.

Machado has since backtracked on those comments, saying he was on the defensive when the media came after him. Still, there’s plenty of debate fodder here.

Thanksgiving always provides a good mix of old school and new school perspective, so there’s bound to be clashes on this subject. It sounds like the same thing is happening in some MLB front offices too as they consider Machado’s free agency. He’s going to make a lot of money regardless, but his attitude is bound to draw a line in the middle of whichever fanbase he chooses to represent.

It’s officially Hall of Fame debate season. The 2019 ballot was released on Monday, and it includes a whole new cast of characters whose stats and contributions we can analyze until every piece of pumpkin pie is devoured. The ballot includes newcomers like Mariano Rivera and Roy Halladay. They’ll join the returning cast of heavily debated players, such as Barry Bonds, Roger Clemens and Edgar Martinez. The “Today’s Game” ballot is also out with George Steinbrenner and Lou Piniella headlining.

Like that completely unnecessary but difficult to resist third turkey sandwich, there are a lot of names and numbers to digest. Not to mention the circumstances and controversies surrounding some of the candidates. But who better to share such polarizing and intense debates with than people you probably won’t see for another year?

Is “bullpenning” the real future of pitching?

If the Hall of Fame ballot isn’t the most contentious discussion, this one might be. That’s because change is difficult to accept.

The change in this instance is a movement toward more non-traditional starting pitchers, which have been termed “openers.” That simply means a pitcher who starts with the purpose of pitching one, maybe two innings. Or in some cases facing one, maybe two batters, before the manager starts a parade of relief pitchers known as “bullpenning.”

After reading all of that again, this one’s probably best for the dedicated baseball fans in your life.

The Tampa Bay Rays and Oakland Athletics did a lot of bullpenning during the 2018 season. Both teams lacked starting pitching depth, but managed to find success in riding a variety of pitchers and strategies to unexpected 90+ win seasons. The Milwaukee Brewers found some success doing the same in the postseason too. Because of that, there’s bound to be more teams following suit to some degree.

It’s already a hotly debated topic as some fans prefer the traditional approach to pitching, while others don’t care as long as it works. Keep track of everyone’s opinion this year and then reflect next year when no one remembers what a starting pitcher was.