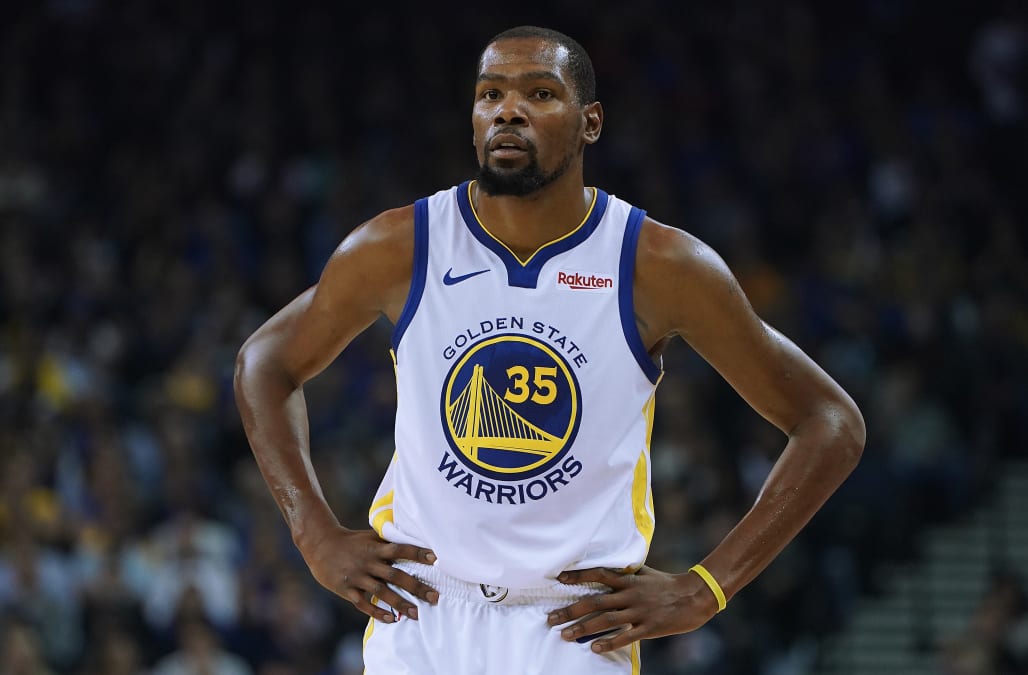 OAKLAND, Calif. — Golden State Warriors forward Kevin Durant said last week’s well-publicized, in-game exchange with Draymond Green that resulted in Green’s one-game suspension will have no bearing on his future with the franchise and that he’s more than ready to move on from the incident.

“Nah, [it won’t factor],” Durant told Yahoo Sports on Tuesday. “Because at the end of the day, I’m just a ballplayer that’s just trying to be in a great environment to play basketball and groom my skills every day. And I want to compete on a level that once the game starts, I’m just totally comfortable with my surroundings, with just going out there and being me.”

Durant holds a player option for the 2019-20 season that he’s expected to decline so he can enter free agency next summer, and there was concern the spat could result in the back-to-back Finals MVP leaving the franchise in July. But Durant emphasized there’s no issue with Green and that he’s ready to put everything in the past.

“I never really felt like it was a problem, because I know Dray and he says some crazy [expletive] out his mouth all the time,” Durant told Yahoo Sports. “But on top of that, it was just that there was so much coming with it from the outside, and so much stuff that we have to answer now.”

In his first one-on-one interview since the incident, the nine-time All-Star said it didn’t take him long to put everything in perspective.

“I was upset, but I know that I can’t hold on to something like this,” Durant told Yahoo Sports. “I know that I’ve got to make a choice with myself, like how long are you going to be upset about this to the point where you’re going to let it affect what you do on the floor or how you approach the game? Once it gets there now, I got to make a grown-man decision and tell myself, ‘Look, man, no matter what, you still got to come to work every single day. It’s going to work out. It’s going to figure itself out.’ And I think everyone’s been handling it the best way they could and we’re just trying to move forward with it.”

After serving his one-game suspension for “conduct detrimental to the team” for his expletive-filled tirade during an overtime loss to the Los Angeles Clippers on Nov. 12, Green approached Durant in Houston to mend fences. The two stars agreed to move on and channel their energy on the team’s championship quest.

But Durant, who had been in a sour mood since butting heads with Green, said he didn’t view the incident as severe as everyone else made it out to be.

“After the game against Atlanta [the night after the incident], I’m like, ‘I need to talk after the game?’’’ Durant told Yahoo Sports. “During the game, I’m like, ‘Ah, [expletive], I’m probably going to have to say something about this.’ Why do I have to think about that during the basketball game? And that’s a fight I had to have, focusing on just playing. …

“And that’s what I tend to focus on, but you’ve got so much B.S. that’s being thrown your way that I didn’t create. If I created all of this stuff, then I couldn’t be out here talking like this, but I didn’t create any of this. I’m just out here playing.”

That was perhaps the most frustrating part of the experience for the 7-foot small forward who was the 2013-14 league MVP.

“My whole thing is I didn’t create any of this,” he continued. “That’s just my whole thing. I was just playing basketball. Now, I got to answer questions, now I got to talk about this, now I got to feel a way when I was in a great zone playing basketball. … Now, it’s always going to come back. Like, ‘Are they all right? Man, he didn’t play well. Is he going to leave?’ Why do I even have to think about that at this point? … Then it turned into, ‘K.D.’s going to this place, he doesn’t like the Warriors no more. He should go here, he should go there.’ More distractions.”

In the end, Durant said the situation could become a galvanizing force that could bring the team closer.

“When you go through some adversity in your personal relationships and you kind of lay everything out on the table with that human, that person, you start to just really get an understanding for everything,” Durant told Yahoo Sports. “… I feel like we’ll all do that at some point. Not just me and Draymond, but I feel like just being with these guys for so long that you start to get comfortable.”