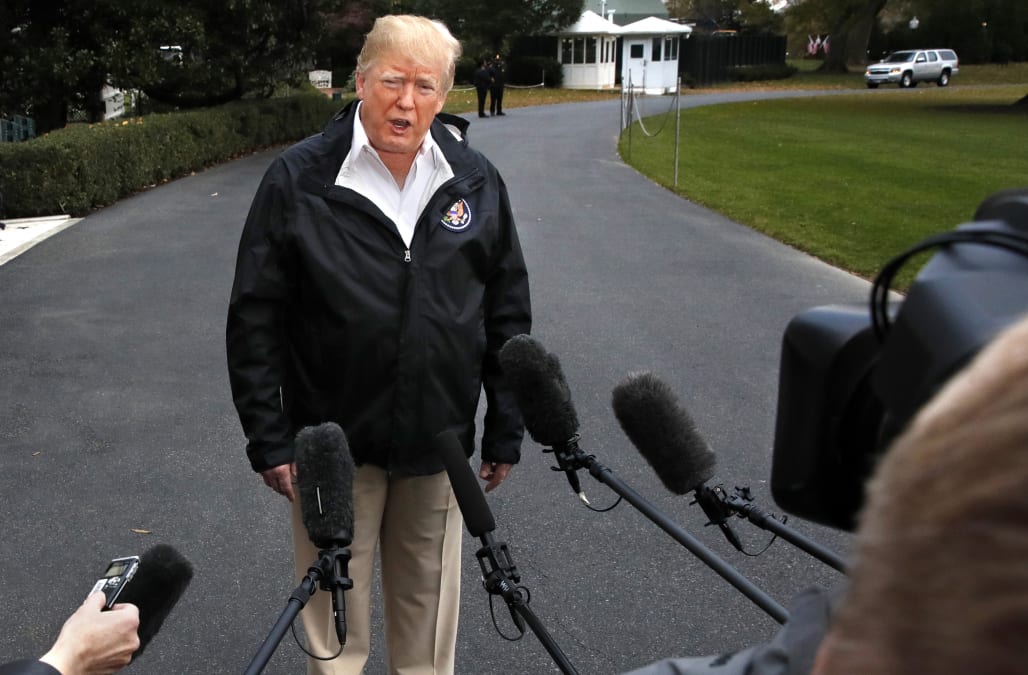 It was a tough week for the commander in chief.

Already under fire being a no-show at a ceremony in France commemorating the end of World War I and at an event at Arlington National Cemetery honoring U.S. soldiers on Veterans Day, President Trump on Monday attempted to deflect criticism of his dismissive remarks about a respected retired naval commander — the man in charge of the daring raid that killed Sept. 11 mastermind Osama bin Laden in Pakistan.

In an interview with Chris Wallace that aired on Fox News on Sunday, the president appeared to mock retired Admiral William McRaven, a Navy Seal who commanded the Joint Special Operations Command from 2011 to 2014, for not taking out bin Laden sooner. “Wouldn’t it have been nice if we got Osama bin Laden a lot sooner than that, wouldn’t it have been nice?” Trump asked. He dismissed McRaven as “a Hillary Clinton backer and an Obama backer.”

As a protest against White House policies, McRaven — a frequent critic of Trump — earlier this year wrote an open letter asking the administration to revoke his security clearance. He called Trump’s attacks on the press “perhaps the greatest threat to democracy in my lifetime.”

Trump’s comments were reminiscent of others he has made in denigrating decorated members of the military, most notably Sen. John McCain, a former prisoner of war. “He was a hero because he got captured,” Trump said in 2015 of McCain, who died in August. “I like people who weren’t captured.”

On Monday, Trump tried to distract from his implied criticism of McRaven by blaming President Clinton and taking credit for warning about bin Laden before 9/11.

Of course we should have captured Osama Bin Laden long before we did. I pointed him out in my book just BEFORE the attack on the World Trade Center. President Clinton famously missed his shot. We paid Pakistan Billions of Dollars & they never told us he was living there. Fools!..

In a statement released to CNN, McRaven — whose name was briefly floated in 2016 as a possible running mate for Hillary Clinton — disputed Trump’s characterization of him as a political opponent.

“I did not back Hillary Clinton or anyone else. I am a fan of President Obama and President George W. Bush, both of whom I worked for. I admire all presidents, regardless of their political party, who uphold the dignity of the office and who use that office to bring the nation together in challenging times,” the statement read.

The back and forth came at a precarious time for Trump, who bills himself as the most pro-military president ever. He faces criticism not only over his failure to attend the military ceremonies but over the  deployment — widely regarded as a political stunt — of over 5,000 troops on the border with Mexico, as well as his call to stop counting votes in Florida’s Senate and gubernatorial races before all military mail-in ballots had been tallied. Opponents have also pointed out that halfway through his term, the president has not visited U.S. troops deployed in Iraq and Afghanistan.

“I think there’s a certain honesty to what’s happening now,” retired Army Gen. Stanley McChrystal told CNN on Monday. “The president didn’t go to Arlington cemetery for Veterans’ Day, and maybe that’s honest, because if you really don’t care, it would be dishonest to pretend that you do.”

Since taking office, Trump has increased military spending, allocating $717 billion for wide-ranging expenditures related to national defense. In June, he signed the Veterans Choice Program Extension, an update of a 2014 law that lets some veterans continue to receive health care through the private sector. Even so, Trump’s support among military personnel continues to drop. In a Military Times poll released in October, 44 percent of active-duty soldiers said they had a favorable view of the commander in chief, while 43 percent said the opposite.

As he campaigned around the country ahead of the midterm elections, Trump regularly boasted about his backing from and support for the U.S. military.

“Nobody has been better at the military,” Trump said in an interview last month with the Associated Press, referring to his policies as president. Before entering politics, Trump did not serve in uniform, avoiding the draft during the Vietnam War with a diagnosis of a “bone spur” in his ankle.

More from Yahoo News:
Trump rates his presidency ‘A+’: ‘Is that enough? Can I go higher than that?’
Trump explains his no-show at Arlington: 'I was extremely busy on calls'
President Trump says he has 'never used racist remarks'