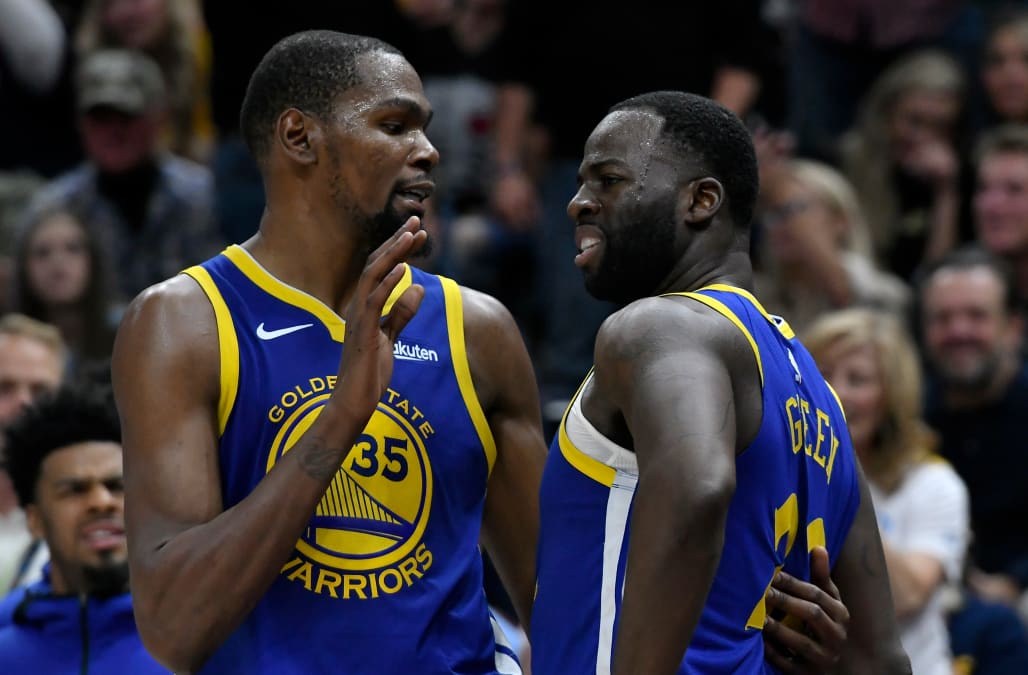 HOUSTON – Inside this very building, the Toyota Center, nearly six months ago in the Western Conference finals, Golden State Warriors All-Stars Draymond Green and Kevin Durant weren’t having it.

The Houston Rockets had just gone up 3-2 in the series, and while the pair was getting dressed in the locker room, they became irritated that a reporter would suggest they were in trouble.

“Get the [expletive] out of here,” Green responded swiftly. “Watch us figure this [expletive] out.” Durant, who was at the locker stall directly to Green’s right, spouted, “[Expletive], you [are expletive] crazy.”

They ended up figuring it out.

But now, it’s possible Monday’s profanity-laced engagement — directed at each other during an overtime loss to the Los Angeles Clippers — may be too problematic, too callous and too detrimental to overcome.

The Warriors suspended Green for one game without pay, citing “conduct detrimental to the team.” The organization felt Green took his beef too far after Durant called him out for not passing him the ball at the end of regulation.

But in actuality, Green’s rant was conduct detrimental to Durant’s future with the Warriors.

After the Rockets wiped the floor with the Stephen Curry-less Warriors on Thursday night, it’s the team’s immediate future that is of concern.

“We’re banged up physically and banged up spiritually,” coach Steve Kerr said after the 107-86 loss. “There’s no getting around that.”

Yahoo Sports received additional accounts from numerous sources who were within earshot of what was verbalized in the Warriors’ heated huddle at the end of regulation Monday night.

Green called Durant a “bitch” multiple times, sources said. In a summarized version, sources said Green shouted, “You’re a bitch and you know you’re a bitch.” The rhetoric, sources said, continued even when Kerr attempted to direct the team’s attention to his whiteboard.

But what ultimately led to Green’s suspension, sources said, was a remark in which he dared Durant to bolt in free agency next summer. Durant has a player option for the 2019-20 season, and the Warriors want their superteam intact for the opening of their new arena, the Chase Center, in San Francisco next season.

Green blurted to Durant something along the lines of, “We don’t need you. We won without you. Leave,” sources said.

That stance couldn’t be any further from how the franchise views its odds of competing for titles in the future without Durant. The Warriors desperately want to re-sign the 7-foot small forward, and such a divisive incident in front of the entire team from one of their most influential players was deemed grounds for discipline.

Emotions got the best of both of them, but Green put the organization in a difficult spot.

There was a point during the argument when Durant cringed, and that was when it went from a typical competitive basketball argument to a personal shot that cut deep, sources said.

“If those emotions are what caused us to lose [Thursday night], then my bad,” said Green, who registered five boards, five assists and five turnovers in his first game back from the suspension. “But we’re not panicking. … We’re still the best team in the league and we’re going to win a bunch of games and go win another championship and we’ll be fine.”

But who said what matters in this situation.

The verbal jabs were uttered out of the very mouth of Green, who, two years ago, famously called Durant in the parking lot of Oracle Arena after losing Game 7 of the 2016 NBA Finals to LeBron James’ Cleveland Cavaliers and relayed to him that the Warriors needed him.

Durant has faced immense criticism for his decision to join the Warriors, and to hear his teammate, who he’s won two consecutive championships with, echo some of those critics was distressing.

Durant has been in a foul mood ever since, and he now has the Warriors’ full attention. After the blowout loss in which he posted 20 points and five rebounds, he was asked to characterize how things are between him and Green.

“Don’t ask me about that again,” Durant responded.

Green initially was dismayed that Durant would show him up in that setting and at that juncture of the game, sources said.

Sources close to Green say he took exception to Durant’s criticism because he felt his desire to win was being questioned.

Green, the 2016-17 NBA Defensive Player of the Year, is the one who does the work that mostly goes unnoticed: sacrificing financially, freeing guys up with hard screens, anchoring the defense, recruiting, playmaking and filling the enforcer role.

Green also returned to action prematurely, sources said, as he continues to deal with a lingering toe injury that cost him two games last week, illustrating just how badly he wants to be on the court with his teammates.

Green took the first step in attempting to repair what appears to be a fragile relationship.

He went out of his way to approach Durant before shootaround Thursday morning. They walked inside the Toyota Center together, communicating in what appeared to be a positive conversation.

And about an hour later, a composed Green addressed the situation for the first time by issuing a three-minute statement. He did not take questions, but he acknowledged he’s an emotional player, expressing that he and Durant are “moving forward” and saying that he’s not going to change his vocal leadership style.

Rival teams and opposing players are attempting to gather more information on the morale and status of the Warriors, sources said. The whole affair is being viewed as promising to the opposition.

As The Athletic reported, there are those in the organization who believe Durant is leaving at the conclusion of the season regardless of how the team finishes. And if that occurs, fairly or not, Monday’s verbal altercation will come up as a reason for his departure.

This storylines and the potential implications of Durant’s possible free agency are worth monitoring. Until then, the hope is Durant, Green and the organization can get back to their joyous, fun-filled winning ways.

If not, this very well could be the beginning of the end.