More races go to Democrats, including Senate seat in Ariz. 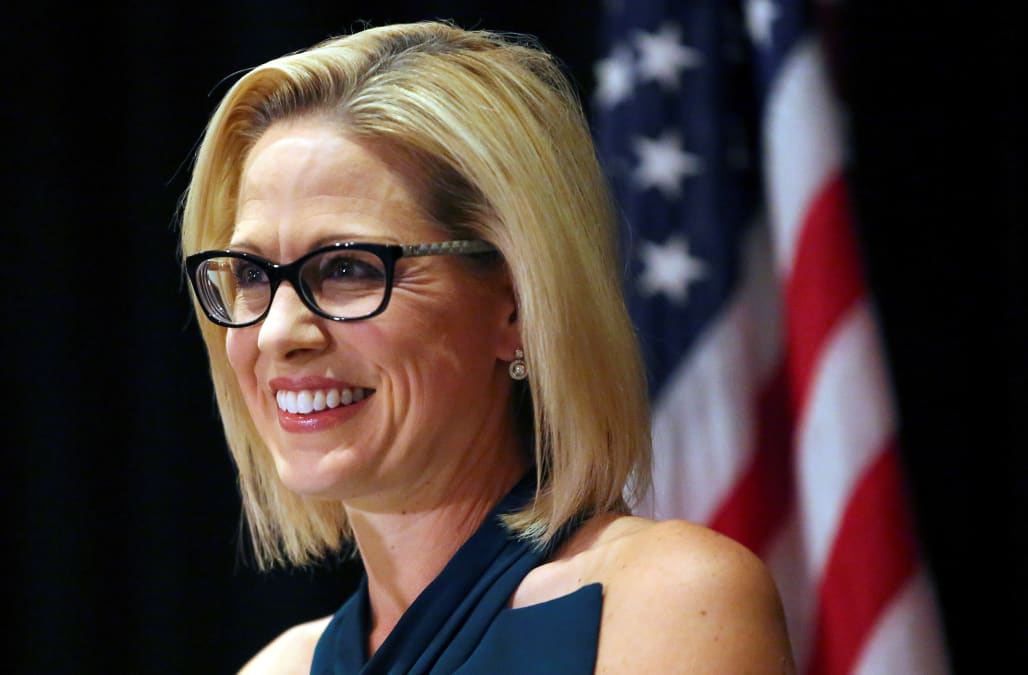 NEW YORK (AP) — No, it wasn't a blue wave. But a week after the voting, Democrats are riding higher than they thought on election night.

As vote counting presses on in several states, the Democrats have steadily chalked up victories across the country, firming up their grip on the U.S. House and statehouses. The slow roll of wins has given the party plenty to celebrate.

President Donald Trump was quick to claim victory for his party on election night. But the Democrats, who hit political rock bottom just two years ago, have now picked up at least 32 seats in the House — and lead in four more — in addition to flipping seven governorships and eight state legislative chambers.

The overall results in the first nationwide election of the Trump presidency represent the Democratic Party's best midterm performance since Watergate.

"Over the last week we've moved from relief at winning the House to rejoicing at a genuine wave of diverse, progressive and inspiring Democrats winning office," said Ben Wikler, Washington director of the liberal group MoveOn.

The blue shift alters the trajectory of Trump's next two years in the White House, breaking up the Republican monopoly in Washington. It also gives Democrats stronger footing in key states ahead of the next presidential race and in the redrawing of congressional districts — a complicated process that has been dominated by the GOP, which has drawn favorable boundaries for their candidates.

Trump and his allies discounted the Democratic victories on Monday, pointing to GOP successes in Republican-leaning states.

"Thanks to the grassroots support for @realDonaldTrump and our party's ground game, we were able to #DefyHistory and make gains in the Senate!" Republican National Committee Chairwoman Ronna McDaniel tweeted, citing Senate wins in Indiana, Missouri, North Dakota and Tennessee, among others.

Indeed, just once in the past three decades had a sitting president added Senate seats in his first midterm election. But lost in McDaniel's assessment was the difficult 2018 Senate landscape for Democrats, who were defending 10 seats in states Trump carried just two years ago.

Democratic National Committee Chairman Tom Perez said in an interview: "I believe in facts. And the fact of the matter is, the Democratic Party had a historic night at the ballot box — and we are not resting,"

He said, "Our goal was to compete everywhere, to expand and reshape the electorate everywhere — and that's exactly what we've done."

They also won by running candidates with military backgrounds who openly embraced gun ownership, such as Pennsylvania Rep. Conor Lamb and Maine's Jared Golden, who is poised to win his contest because of the state's ranked-choice voting system.

The Democrats needed to gain 23 seats to seize the House majority. Once all the votes are counted, which could take weeks in some cases as absentees and provisional ballots are tallied, they could win close to 40.

Democrats have not lost a single House incumbent so far. Yet they defeated Republican targets such as Reps. Mike Coffman of Colorado, Barbara Comstock of Virginia, Carlos Curbelo of Florida and Dana Rohrabacher of California.

They could win as many as 19 House races in districts carried by Trump two years ago, according to House Democrats' campaign arm.

Ten House races remained too close for the AP to call as of Monday evening.

Far more of the Senate landscape was decided early, although contests in Florida and Mississippi remain outstanding.

Overall, they flipped state legislative chambers in eight states this midterm season, including Washington state's Senate in 2017. The others include the state Senates in Maine, Colorado, New York, New Hampshire and Connecticut in addition to the state Houses of Representatives in New Hampshire and Minnesota.

With hundreds of races still too close to call, Democrats have won at least 370 new state legislative seats nationwide, according to the Democratic Legislative Campaign Committee, although the new seats were offset by Republican wins in some cases. The pickups include surprises in West Virginia, where Democrats knocked off the GOP majority leader-designate in the House and the majority leader in the Senate.

"We have elected a new generation of inspiring leaders and we know that a new era of democratic dominance is on the horizon," said the committee's executive director Jessica Post.

Still, Republicans will control the majority of state legislative chambers, governorships, the U.S. Senate and the White House. And even before the new Democrats take office, attention has begun to shift toward 2020.

Many Democrats have yet to shake off the stinging losses of 2016. Publicly and privately, Democrats are lining up for the chance to take down Trump in two years.

"This is step one of a two-step process to right the ship," Guy Cecil, chairman of the pro-Democrat super PAC Priorities USA, said of the midterms. "Democrats have every reason to be optimistic."