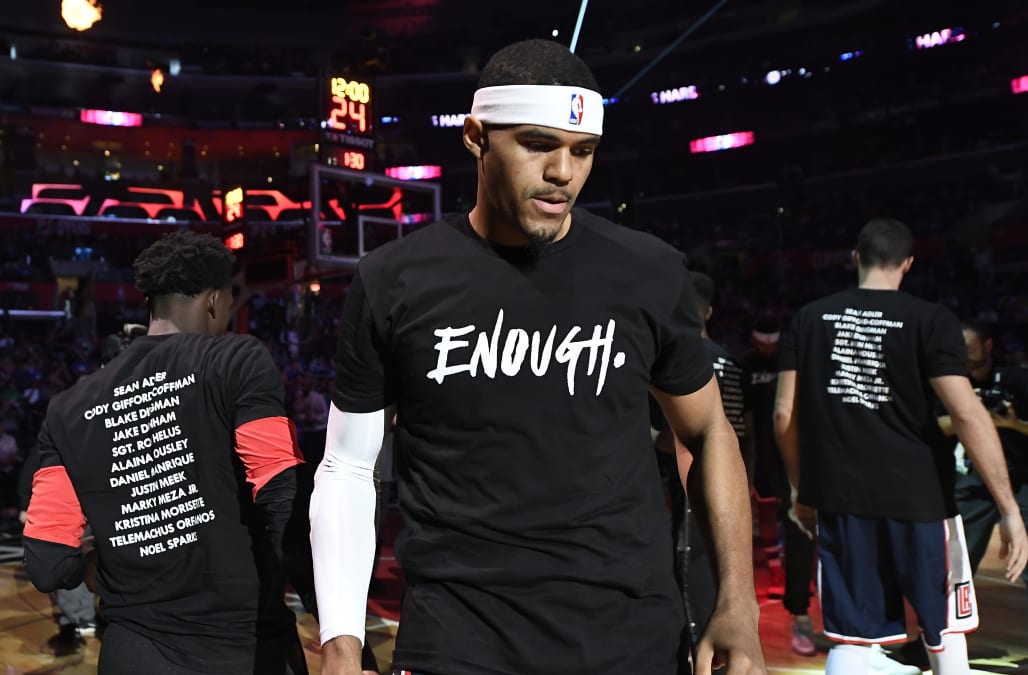 They were one of four teams along with the Los Angeles Lakers, Milwaukee Bucks and Atlanta Hawks to wear “Enough” shirts with the names of the victims on the back after the shooting.

On Monday before taking on the Golden State Warriors, they started selling those shirts with all the proceeds going to the Ventura County Community foundation. In addition, the team joined up with Cedars-Sinai to host a blood drive in Staples Center from 6 p.m. through halftime.

The Clippers and partner @CedarsSinai will be collecting blood in honor and in support of the Thousand Oaks community.

Fans at Monday’s game can arrive as early as 6 p.m. to participate in the blood drive.

Blood donors will receive a pair of free tickets to a future home game. pic.twitter.com/trlyKNwuKs

The Clippers gave out tickets to future games against either the Sacramento Kings, Charlotte Hornets and Phoenix Suns to those who donated.

Warriors coach Steve Kerr, who has been a vocal advocate for gun control, and Clippers coach Doc Rivers both praised the organization’s efforts. Kerr said that while he was happy that the NBA and commissioner Adam Silver supported the teams’ efforts to raise awareness, the government also needed to step up in the discussion. The Warriors coach also had harsh words for those using the Second Amendment as a shield.

”We can’t just keep spewing out the same garbage about, ‘Well, it’s the Second Amendment; it’s the price of freedom.’ Give me a break,” Kerr said. “We don’t have freedom if we can’t walk into a bar, a movie theater, a concert without being worried of getting murdered. So I’m glad that the NBA has backed up the players, I’m glad that Adam Silver came out and supported the players for wearing the shirts and I support the players. We’re all in this together, we just want people to be safe and so I’m all in.”

Rivers echoed Kerr’s sentiment about speaking up. The Clippers coach said it was one of his proudest moments as part of the organization.

“Instead of doing a moment of silence and saying nothing, we said something,” Rivers said before the game. “We wore something, and more importantly, we spoke about it.”

The public address announcer reiterated the Rivers’ statement on behalf of the team.