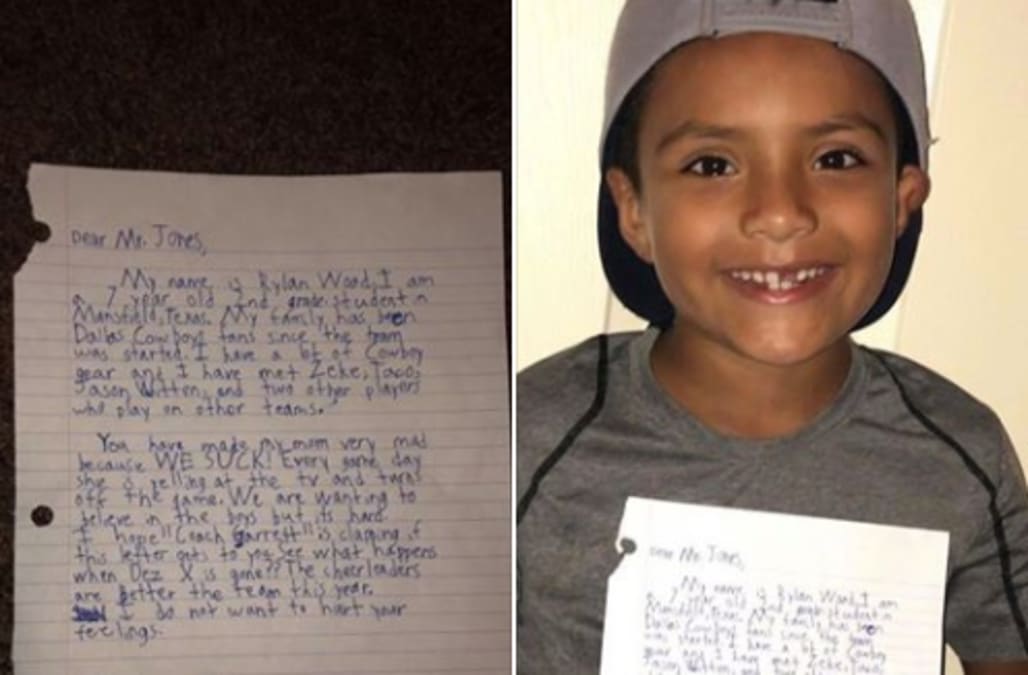 Seven-year-old Rylan Wood was watching the Dallas Cowboys on Monday night with his mom, Kayla Jimenez, at their home in Mansfield, Texas - a suburb just southwest of Dallas.

When the Cowboys fell behind the Tennessee Titans early in the Monday Night Football matchup, Wood was determined to do something if they couldn’t rally back and grab the win.

“He told me if the Cowboys lose, ‘I really want to write a letter',” Jimenez told WFAA in Dallas. “So I was like, ‘OK'.”

Wood, though, didn’t get to see the end of the game. He had school the next morning, and had to go to bed before it was over.

For his sake, it’s probably good that he didn’t see the end of the game. The Cowboys fell to the Titans 28-14 at AT&T Stadium, dropping their third game in five weeks and falling to 3-5 overall.

“The first thing he asked me when he woke up was, ‘Did we win?’” Jimenez told WFAA. “When I told him no, he said, ‘OK, I’m writing this letter after school.'”

So, with a bit of his mom’s help, Wood wrote his letter to Cowboys owner Jerry Jones that afternoon.

And he didn’t hold back.

My name is Rylan Wood. I am a 7-year-old 2nd grade student in Mansfield, Texas. My family has been Dallas Cowboys fans since the team was started. I have a lot of Cowboy gear and I have met ‘Zeke, Taco, Jason Witten and two other players who play on other teams.

You have made my mom very mad because WE SUCK! Every game day she is yelling at the TV and turns off the game. We are wanting to believe in the boys but its hard. I hope “Coach Garrett” is clapping if this letter gets to you. See what happens when Dez X is gone?? The cheerleaders are better than the team this year. I do not want to hurt your feelings.

Wood seems to have perfectly captured the frustration that many Cowboys fans across the country are feeling this season into his letter. And, adorably, he ended the letter making sure that Jones knew he wasn’t trying to hurt his feelings.

“They’ve broken my heart a little bit,” Wood told WFAA. “They’ve been doing a good job, but I just want them to win every time.”

Who knows? Maybe this letter was the missing piece Jones needed to turn his team’s season around.

If nothing else, it’s at least worth a shot.