Georgia Governor's election is too close to call 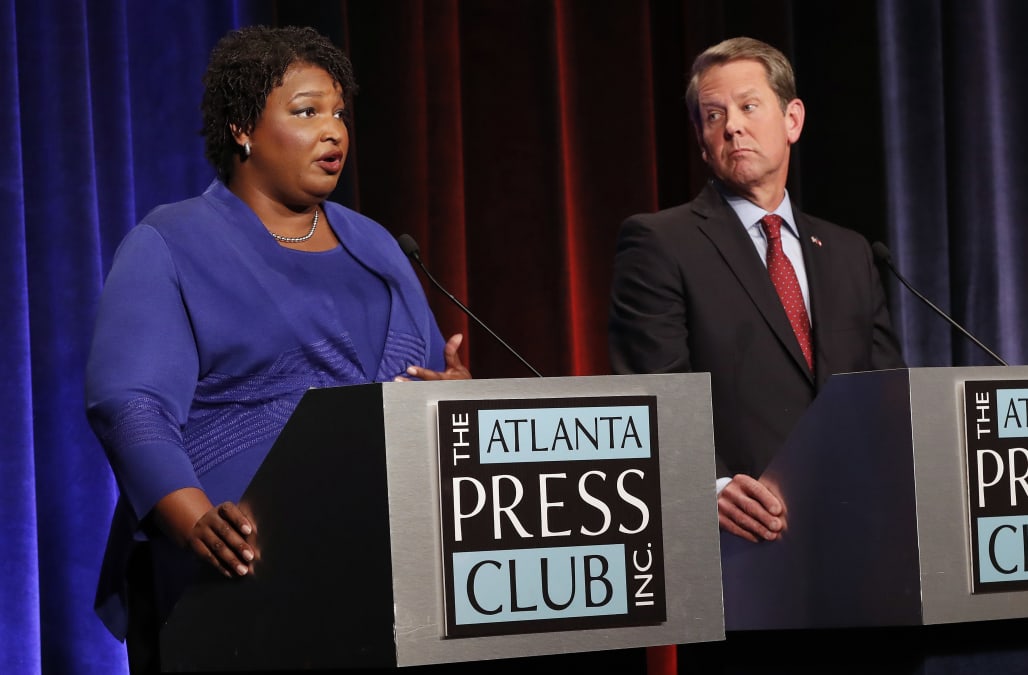 The Georgia governor’s race between Democrat Stacey Abrams and Republican Brian Kemp is too close to call.

Georgia requires a candidate to get at least 50 percent of the vote to win outright, and although Kemp held a several-point lead as of early Wednesday morning, Abrams’ campaign said it expected the election to head to a runoff ― meaning voters would have to return to the polls on Dec. 4.

“There are tens of thousands of absentee ballots around the state, many of them we believe are Abrams voters,” said Lauren Groh-Wargo, Abrams’ campaign manager.

The heated election, viewed by many as a battle for the soul of Georgia, was plagued by voter suppression. Abrams, who served as minority leader of the state House of Representatives and would be the first black female governor in the history of the United States, depended largely on voters of color turning out in big numbers to win in the deep red state. Kemp, who oversaw the election because he refused to resign as secretary of state, reportedly engaged in multiple attempts to suppress the black vote in Georgia and purge the voter rolls.

Under Kemp’s leadership, the state’s process for verifying voters’ information left the registration applications of over 53,000 people in jeopardy ― 70 percent of which were from black voters. Officials also tried to close polling places in majority black counties.

Kemp’s office publicly announced two days before the election, without evidence, that it would open an investigation into the Georgia Democratic Party for allegedly hacking into voting machines. Democrats called the move a “reckless and unethical ploy,” noting that Kemp should have resigned his office before running for governor to avoid a conflict of interest.

And Georgia voters reported intense difficulties at the polls on Tuesday. The state had to keep polling locations open late after multiple majority-black districts had technical difficulties with voting machines, including a lack of power cords. Voters reported hours-long lines and other obstacles that some attributed to voter suppression efforts.

“If you are aspiring to the highest office in the state in which you pledge to look out for the people of your state, then how can you actively try to prevent the citizens of your state from exercising their most basic right?” former President Barack Obama asked while campaigning for Abrams.

Kemp and Abrams have both been stockpiling money for a possible runoff. Kemp has raised nearly a quarter-million dollars for the effort since July, while Abrams has raised about $100,000.

At the election night party for Abrams in Atlanta on Tuesday night, the crowd ― mostly made up of women of color ― was clearly excited about the historic nature of Abrams’ campaign and the potential to break a glass ceiling in Georgia. But in contrast to Hillary Clinton’s campaign in 2016, it seemed like people came in realistic and clear-eyed about a potential loss.

“No matter what happens, this is history,” said Deedee, 52. “I even told my Uber driver that the ride was a part of history.”

Abrams campaigned on expanding Medicaid and voting rights across the state. She grew up poor in Mississippi, one of six children with a mother who worked as a librarian and a father who worked in a shipyard. She went on to graduate from Yale Law School and has been open about the fact that she is still $200,000 in debt from student and credit card loans. She’s a single woman, and she has written romance novels on the side while rising through local politics.

Kemp embraced President Donald Trump and his politics throughout the race, emphasizing gun rights and threatening in one ad to “round up” undocumented immigrants himself in his giant pick-up truck.

The razor-thin race between two such different candidates has captivated the nation. Obama flew to Georgia to stump for Abrams, as did celebrities like Oprah Winfrey, Will Ferrell and Michael B. Jordan. Winfrey urged women and people of color to stand up to voter suppression efforts.

“When you can feel what is the right thing to do,” she said, “you can’t be influenced by propaganda and fear.”

Trump and Vice President Mike Pence held rallies for Kemp, with the former charging that Abrams is “not qualified” to be governor ― despite her Yale Law degree and six years leading the state House.

More from HuffPost US:
Alexandria Ocasio-Cortez proclaims ‘we made history’ during NYC victory speech
Arizona still has to count hundreds of thousands of ballots before declaring Senate winner
Mission accomplished for Democrats, but not without disappointment