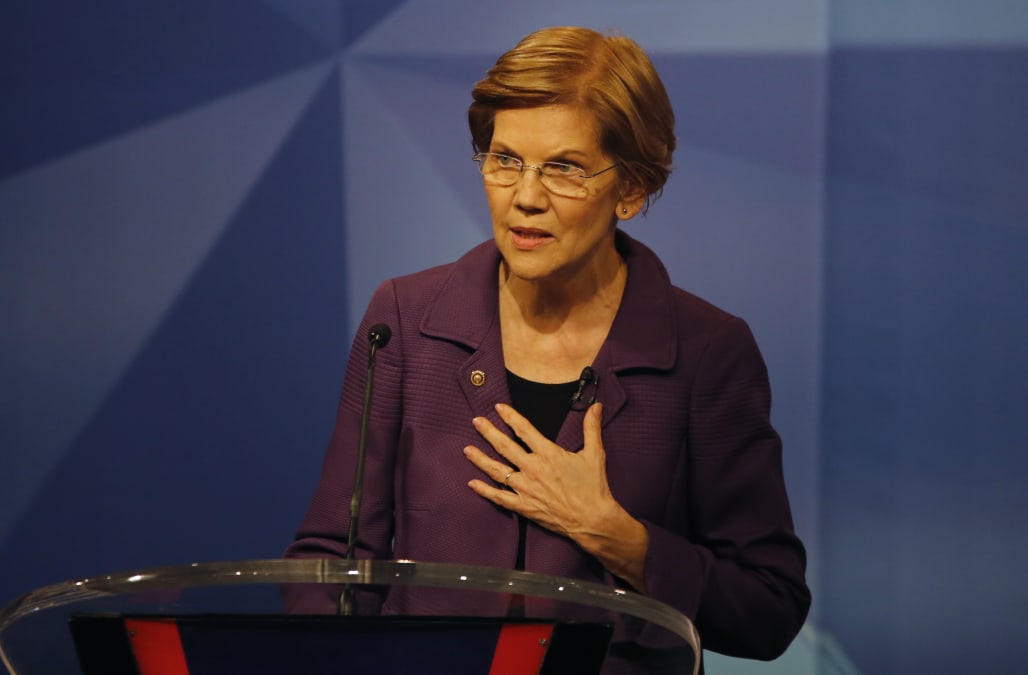 BOSTON (AP) — Fans of U.S. Sen. Elizabeth Warren may have long fantasized about a face-to-face debate between the liberal firebrand and her nemesis, President Donald Trump.

This campaign, they've gotten the next best thing as the Massachusetts Democrat has worked to fend off a challenge by Republican Geoff Diehl, a state representative and co-chair of Trump's 2016 campaign in the state.

Although Warren is ahead in the polls and fundraising, some see in the sparring match a test run for a possible real-life clash between Warren and Trump in the 2020 presidential election.

There are a lot of hurdles that Warren — who has said she would take a hard look after the November election at a run for president — would have to clear on the way to that scenario. She has yet to say definitively that she is running for president, and there are plenty of other Democrats in the hypothetical mix, making Warren's path to her party's nomination anything but certain.

But the midterm election has given Warren a chance to dust off her campaign chops. In televised debates, Warren has gone after Diehl hard. The Republican has responded by painting Warren as out of touch with Massachusetts voters.

In a recent interview with The Associated Press, Warren wasted little time connecting Diehl to Trump, who remains unpopular in Massachusetts, where he garnered less than 34 percent of the 2016 vote.

Diehl said that while he supports Trump — he noted the unemployment rate in Massachusetts has dropped during the past two years — he doesn't agree with every Trump-backed policy. He said he opposed the proposed elimination of state and local tax deductions in the GOP tax reform bill.

Diehl has also shied away from calling Warren "Pocahontas," a favorite Trump taunt and a reference to Warren's claims of Native American heritage.

"We've never made it an issue with this campaign," Diehl told the AP. "It's an issue that's been attached to her since 2012. We'll see if the public believes what she's saying."

Warren in October released DNA test results that provide some evidence of a Native American in her lineage. The test has done little to quell criticism of her by Trump and his supporters.

Asked whether the release of the DNA test accomplished what she'd hoped, Warren said her goal is to be an open book.

"This is just who I am. I put it all out there. Ten years of tax returns. All my employment records. And yeah, I even took a DNA test. It's there. It's on the internet. Anybody can take a look at it," she said.

Jeffrey Berry, a professor of American politics and political behavior at Tufts University, said Warren is already looking past Diehl as she weighs a possible White House run, noting her travels to other states to campaign with — and raise money for — fellow Democrats.

"There's going to be two lanes that quickly emerge after November," Berry said. "One is the very liberal lane and one is the even more liberal lane."

"She's going to be in the even more liberal lane and will face candidates like Kamala Harris, while more moderate voices like Kirsten Gillibrand and Deval Patrick will be in the conventional liberal lane," he said, referring to the senators from California and New York and the former governor of Massachusetts. All three have been mentioned as possible Democratic presidential hopefuls.

'This has been my life's work'

Despite her national profile and occasional Twitter feuds with Trump, Warren says that for her, politics is a means to an end — helping to reverse what she calls the "hollowing out of the middle class" in America.

"I didn't get into politics for any reason other than to try to help working families. This has been my life's work," said Warren, who worked as a law professor at Harvard before running for the Senate in 2012. "This is not something I adopted because somebody said it polled well."

For Diehl, Warren's political ambitions have robbed Massachusetts of a full-time advocate in the Senate. He has said that if Warren wants to be president, she should quit her re-election campaign.

Diehl has also argued he can offer Massachusetts something Warren can't — a seat at the table in the GOP-controlled Senate and Republican White House. It's an argument he has made by invoking the late Democratic senator Edward Kennedy.

"Ted Kennedy was the liberal lion of the Senate, but when the elections were over, he would work with Republican presidents or Republican governors here in Massachusetts to deliver for the people," Diehl said. "That's not happening with Sen. Warren."

Although she points to some legislative successes under the Trump administration, Warren said her goal is to help flip the Senate to make it easier for Democrats to push a more ambitious agenda in line with the goals of most Massachusetts voters.

To make that happen, Warren said, she needs as many allies as possible in Congress.

"The best way that I can serve the people of Massachusetts is not only to vote in their interest but also to try to get some allies who will do the same," Warren said. "I want to win these fights."

Asked about the worst thing Trump has done during his two years in office, Warren points to what she describes as his embrace of authoritarian figures like Russian President Vladimir Putin or North Korea's Kim Jong Un.

"When he talks about his love for Kim Jong Un, a brutal, repressive dictator in North Korea and engages in photo ops with him and basically gets nothing in return, I am deeply shocked and I'm left to wonder what's happening here?" Warren said.

Independent candidate Shiva Ayyadurai is also on the ballot.