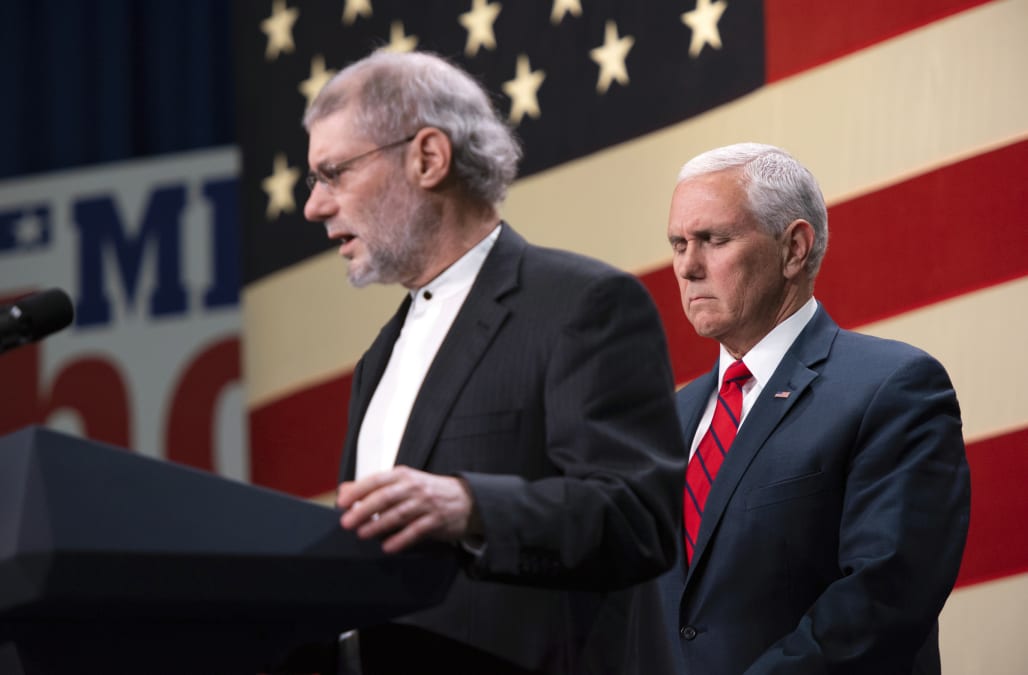 WASHINGTON (AP) — A rabbi invited to pray at a Michigan campaign stop with Vice President Mike Pence on Monday referenced "Jesus the Messiah" at the event.

Rabbi Loren Jacobs of Messianic congregation Shema Yisrael offered prayers for the victims of the Pittsburgh synagogue massacre. Messianic Jews follow Jewish law but believe that Jesus is the Messiah.

The major denominations of Judaism reject Messianic Judaism as a form of Judaism, and Jacobs' participation was condemned by Jews on social media.

A Pence aide told The Associated Press that Jacobs was invited to pray at the event in suburban Detroit's Waterford Township by GOP congressional candidate Lena Epstein and said Pence did not know who he was when he invited Jacobs back onstage to offer another a prayer for the victims, their families and the nation. As Pence stood next to him, Jacobs ended his prayer by saying, "in the name of Jesus."

Victims of the Tree of Life Synagogue shooting in Pittsburgh

Jerry Rabinowitz reportedly died running into the gunfire to help those who had been injured, according to The Independent. Rabinowtiz was also honoured posthumously by The AIDS Memorial, which remembered him on social media for his work with HIV/AIDS patients in Pittsburgh. The post featured a person with HIV/AIDS describing Rabinowitz as being “known in the community for keeping us alive the longest,” saying he often held HIV/AIDS patients’ hands without gloves.

Rose Mallinger, 97 May her memory be a blessing https://t.co/F7d0AGtAU8
Brothers Cecil & David Rosenthal @ACHIEVA: Cecil’s laugh was infectious. David was so kind and had such a gentle s… https://t.co/17B73Dwcwk

This undated photo provided by Barry Werber shows Melvin Wax. Wax was killed when a gunman opened fire at a Pittsburgh synagogue on Saturday, Oct. 27, 2018.

(Courtesy of Barry Werber via AP)

Bernice and Sylvan Simon, 84 & 86, were married at Tree of Life in the 1950s. Bernice was a retired nurse and Sylva… https://t.co/AQk7kRrnx7
'A very special person:' Canadian Joyce Fienberg killed in #Pittsburgh: https://t.co/M7fsuz7VY3 https://t.co/1Xo0orpI3s
Richard Gottfried and his wife, Peg, were of different faiths, but shared a mission to help the neediest. Married 3… https://t.co/5cGsjQWHfk
The identities of those killed and injured in a mass shooting at Squirrel Hill's Tree of Life Synagogue this mornin… https://t.co/fA3BRuojXi
Irving Younger, 69 Younger was a real estate agent, the president of a local business association, a voluteer at… https://t.co/1b79TCHuqH
Up Next

The aide was not authorized to discuss the situation publicly and spoke on the condition of anonymity.

"He was not invited by the VP's office to speak on behalf of the Jewish community," the aide said.

Epstein, who is Jewish, said in a statement that she invited Jacobs' prayer "because we must unite as a nation — while embracing our religious differences — in the aftermath of Pennsylvania." She said anyone attacking her or Pence over the prayer is "guilty of nothing short of religious intolerance and should be ashamed. This was an effort at unity, yet some are trying to create needless division to suit their political goals."

Detroit-area Rabbi Jason Miller said on Facebook that there are at least 60 rabbis on a directory of Michigan rabbis and "yet the only rabbi they could find to offer a prayer for the 11 Jewish victims in Pittsburgh at the Mike Pence rally was a local Jews for Jesus rabbi? That's pathetic!"

Jordan Acker, a Jewish lawyer who is running for the University of Michigan Board of Regents as a Democrat, criticized Epstein on Twitter. He said she was "deeply insensitive for bringing a group on stage whose entire mission is to convert Jews," days after the worst instance of anti-Semitic violence in American history.

Epstein is running against Democrat Haley Stevens for a House seat opening with the retirement of Republican Rep. Dave Trott.