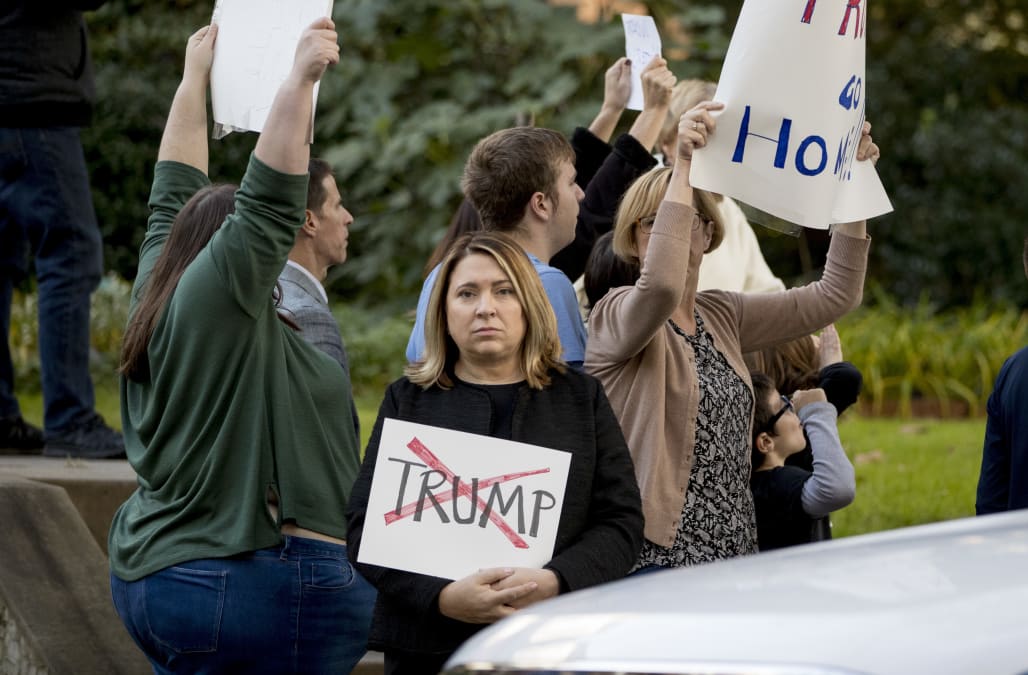 PITTSBURGH (AP) — Pittsburgh's Jewish community began burying its dead Tuesday after the synagogue massacre, holding funerals for a beloved family doctor, a pillar of the congregation, and two 50-something brothers known as the Rosenthal "boys."

President Donald Trump, meanwhile, arrived in Pittsburgh to pay his respects and encountered hundreds of shouting, chanting protesters with signs such as "It's your fault" and "Words matter," a reference to allegations his bellicose language has emboldened bigots. Pennsylvania's governor and the mayor of Pittsburgh declined to join him during the visit.

Earlier in the day, thousands of mourners jammed a synagogue, a Jewish community center and a third, undisclosed site for the first in a weeklong series of funerals for victims of the deadliest anti-Semitic attack in U.S. history.

Dr. Jerry Rabinowitz, Daniel Stein and Cecil and David Rosenthal were among 11 people killed in the shooting rampage at the Tree of Life synagogue Saturday. Robert Gregory Bowers, a 46-year-old truck driver who authorities say raged against Jews, was arrested on federal hate-crime charges that could bring the death penalty.

Victims of the Tree of Life Synagogue shooting in Pittsburgh

Jerry Rabinowitz reportedly died running into the gunfire to help those who had been injured, according to The Independent. Rabinowtiz was also honoured posthumously by The AIDS Memorial, which remembered him on social media for his work with HIV/AIDS patients in Pittsburgh. The post featured a person with HIV/AIDS describing Rabinowitz as being “known in the community for keeping us alive the longest,” saying he often held HIV/AIDS patients’ hands without gloves.

Rose Mallinger, 97 May her memory be a blessing https://t.co/F7d0AGtAU8
Brothers Cecil & David Rosenthal @ACHIEVA: Cecil’s laugh was infectious. David was so kind and had such a gentle s… https://t.co/17B73Dwcwk

This undated photo provided by Barry Werber shows Melvin Wax. Wax was killed when a gunman opened fire at a Pittsburgh synagogue on Saturday, Oct. 27, 2018.

(Courtesy of Barry Werber via AP)

Bernice and Sylvan Simon, 84 & 86, were married at Tree of Life in the 1950s. Bernice was a retired nurse and Sylva… https://t.co/AQk7kRrnx7
'A very special person:' Canadian Joyce Fienberg killed in #Pittsburgh: https://t.co/M7fsuz7VY3 https://t.co/1Xo0orpI3s
Richard Gottfried and his wife, Peg, were of different faiths, but shared a mission to help the neediest. Married 3… https://t.co/5cGsjQWHfk
The identities of those killed and injured in a mass shooting at Squirrel Hill's Tree of Life Synagogue this mornin… https://t.co/fA3BRuojXi
Irving Younger, 69 Younger was a real estate agent, the president of a local business association, a voluteer at… https://t.co/1b79TCHuqH
Up Next

With Tree of Life still cordoned off as a crime scene, more than 1,000 people poured into Rodef Shalom, one of the city's oldest and largest synagogues, to mourn the Rosenthal brothers, ages 59 and 54.

The two intellectually disabled men were "beautiful souls" who had "not an ounce of hate in them — something we're terribly missing today," Rabbi Jeffrey Myers, a survivor of the massacre, said at their funeral.

Myers, his voice quivering, told the Rosenthals' parents and other family members: "The entire world is sharing its grief with you, so you don't walk alone."

The brothers were widely known as "the boys," the Rosenthals' sister, Diane Hirt, noted. "They were innocent like boys, not hardened like men," she said.

She said Cecil — a gregarious man with a booming voice who was lightheartedly known as the mayor of Squirrel Hall and the "town crier" for the gossip he managed to gather — would have especially enjoyed the media attention this week, a thought that brought laughter from the congregation.

Rabinowitz's funeral was held at the Jewish Community Center in the city's Squirrel Hill section, the historic Jewish neighborhood where the rampage took place. Two police vehicles were posted at a side door and two at the main entrance.

A line stretched around the block as mourners — some in white medical coats, some wearing yarmulkes, black hats or head scarves — passed beneath the blue Romanesque arches into the brick building.

The 66-year-old Rabinowitz was a go-to doctor for HIV patients in the epidemic's early and desperate days, a physician who always hugged his patients as they left his office.

"A lot of people are feeling really angry about this. A lot of rage built up inside about this, because of it being a hate crime. Don't get me wrong; I do. But I'm so overwhelmed with sadness right now that I can't even be angry right now," said Robin Faulkner, whose family had seen Rabinowitz for 30 years and counted him as a dear friend. "It's just such a loss. Just tragic."

A private funeral was also held for Stein, the 71-year-old men's club president at Tree of Life.

The other victims' funerals have been scheduled through Friday.

Trump and first lady Melania Trump landed in Pittsburgh after the day's services and lit candles at the Tree of Life for the victims. Outside, they laid white roses as well as stones for each of the dead, a Jewish burial tradition. The president and first lady later went to a hospital to visit with survivors.

They were joined by Trump's daughter Ivanka and her husband, Jared Kushner, as well as Myers, the Tree of Life rabbi, and Israeli Ambassador Ron Dermer.

Hundreds of protesters gathered near the synagogue and the hospital.

"He didn't pull the trigger, but his verbiage and actions don't help," said Squirrel Hill resident Paul Carberry, 55, wearing anti-Trump patches on his hat and jacket.

Democratic Mayor Bill Peduto had asked Trump not to come while the city was burying its dead. He and Gov. Tom Wolf, a fellow Democrat, said they would skip the president's visit.

"Community leaders expressed to the governor that they did not feel it was appropriate for Trump to come, so the governor made a decision not to join him on his visit out of respect for the families and the community," said Beth Melena, Wolf's campaign spokeswoman.

Among the mourners at the Rosenthal brothers' funeral was Dr. Abe Friedman, who typically sat in the back row of Tree of Life with the two men but was late to synagogue on Saturday and was not there when the gunman opened fire.

As he stood in line at the funeral, Friedman wondered why he had been spared.

"Why did things fall into place for me?" he asked. "I usually sit in the back row. In the last row, everyone got killed."

This story has been corrected to show that one of the funerals was held in a Jewish community center, not a synagogue.

More from Aol.com:
3 siblings killed while boarding school bus in Indiana
Brother: Indians died in Yosemite fall while taking selfie
12-year-old girl who died chasing her dog onto highway will be buried alongside her beloved pet