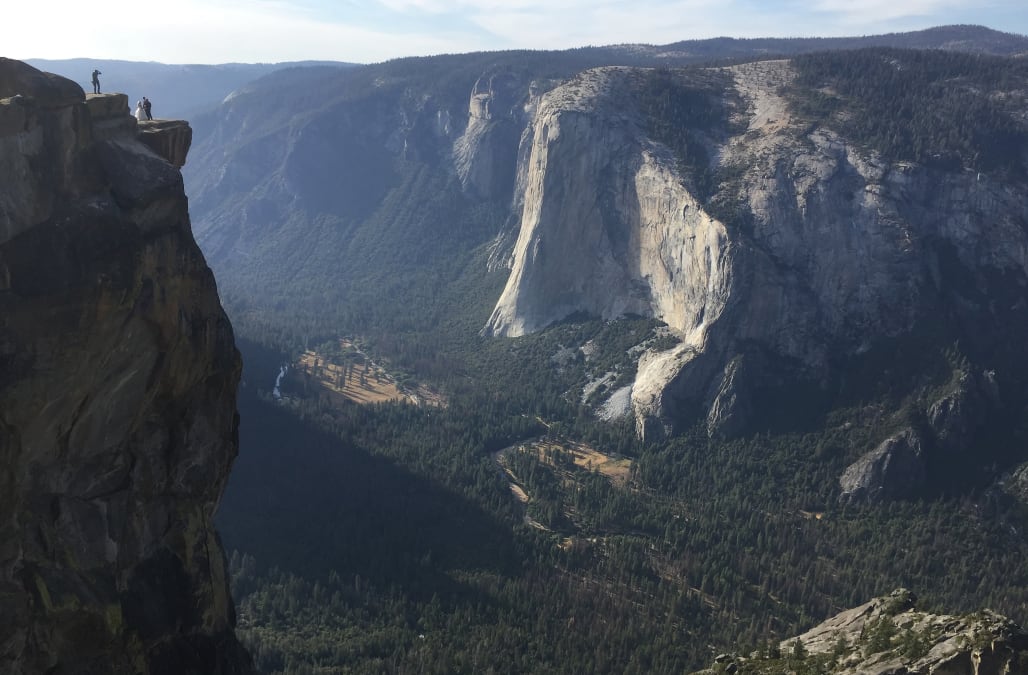 NEW DELHI (AP) — An Indian couple who fell to their deaths from a popular overlook at Yosemite National Park in the western U.S. was apparently taking a selfie, the man's brother said Tuesday.

Park rangers recovered the bodies of 29-year-old Vishnu Viswanath and 30-year-old Meenakshi Moorthy on Thursday from about 800 feet (245 meters) below Taft Point, where visitors can walk to the edge of a vertigo-inducing granite ledge that doesn't have a railing.

Viswanath, who Cisco India said was a software engineer at the company's San Jose, California, headquarters, and Moorthy had set up their tripod near the ledge on Tuesday evening, Viswanath's brother, Jishnu Viswanath, told The Associated Press.

Park visitors the next morning saw the camera and alerted rangers, who "used high-powered binoculars to find them and used helicopters to airlift the bodies," he said.

The funeral will take place in the U.S. since the bodies were not in a condition to be flown back to India, Jishnu Viswanath said.

The couple was "travel-obsessed," Moorthy wrote on a blog called "Holidays and HappilyEverAfters" filled with photos of them in front of snowy peaks, the Eiffel tower and tulip fields. Moorthy had wanted to work full time as a travel blogger, Viswanath said.

"A lot of us including yours truly is a fan of daredevilry attempts of standing at the edge of cliffs and skyscrapers, but did you know that wind gusts can be FATAL???" Moorthy wrote on an Instagram post with a photo of her sitting on the edge of the Grand Canyon. "Is our life just worth one photo?"

The couple graduated in 2010 from the College of Engineering, Chengannur, in Alapuzha district of Kerala state, one of their professors, Dr. Nisha Kuruvilla, told AP.

She said Moorthy and Viswanath were both very good students who were fond of traveling and had married at a Hindu temple in Kerala in southern India four years ago.

Yosemite spokeswoman Jamie Richards said in a statement that park officials were investigating the deaths and that the investigation could take several days.

In India, after a rash of selfie-related deaths, the Tourism Ministry in April asked state government officials to safeguard tourists by installing signs in areas where accidents had occurred declaring them "no-selfie zones."